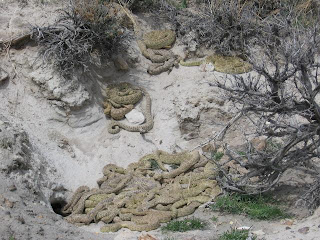 Sometimes I wonder if we're too nice to each other at church.

Maybe “nice” isn't the right word – that word doesn't really say very much, does it? I think what I mean is that I think sometimes we're too...hands-off. Unwilling to be involved. Unwilling to care enough about each other to engage and to disagree, clash, and otherwise get into one another's faces when necessary.

Sometimes churches need to be more like the Snake Pit.

When General Norman Schwarzkopf returned to the States from the Vietnam War, he had to undergo surgery to repair damage to his spine caused by numerous parachute jumps. The surgery saved him from paralysis, but the recovery was slow and painful. Schwarzkopf became depressed. He began to seriously contemplate giving up, retiring from the Army, and abandoning his recovery. And that's when his doctors moved him to the Snake Pit.

The Snake Pit was a ward in the hospital populated by soldiers recovering from some of the most horrific injuries war can inflict. Many of the patients in the Snake Pit had been there for months or years. For them, every day was a fight to win back a little more of their previous lives. They were often coarse and irreverent. They terrorized the nurses and orderlies. And, especially significant for Schwarzkopf, they didn't tolerate whining.

The doctors often assigned patients to the Snake Pit to get their fight back, and it seemed that they usually would. When a new patient to the ward would start to whine, the others would lay into him. They'd tell him he was a wimp, that he should stop complaining, that there were a lot of guys in that word that were in a whole lot worse shape. One, Tom Bratton, who had lost a leg, asked Schwartzkopf with perfect military discipline, “Sir, if I can walk on one leg, how come you can't walk on two?”

Schwarzkopf wrote of the Snake Pit, “They'd often reduce a man to tears. But after that, he'd grind his teeth and fight back, which was precisely what they wanted.”

And then he says, “The guys in the Snake Pit were relentless, but they brought people back to life.”

If our churches don't do much in the way of bringing people back to life, maybe it's because there's not enough of the Snake Pit in us.

I know. The church has been known to get this wrong by being too harsh, too judgmental, too willing to shoot our wounded. Sometimes we've been guilty of using the Bible as a club, the threat of hell to manipulate and control. That's not what I'm talking about. It doesn't take much investment in a person to judge, manipulate, or control. All it takes is a need for superiority and a hunger for power. Sometimes we've been quick to argue and divide over the splitting of theological or doctrinal hairs. Again, that's not what I'm advocating. It doesn't take love for someone to argue over the ways his theology differs from your own. All it takes is a determination to be the one who's “right” in any debate.

I'm talking about something much more difficult, and therefore almost unknown in most churches. I'm talking about the willingness to know someone and be known by them to such a degree that we can say hard things with credibility and hear them without defensiveness.

It's hard for most of us to hear criticism from someone who we're sure loves us. It's almost impossible to hear it from someone whose motives we question. That's why, for instance, you don't rebuke a brother or sister in Christ for divorcing his or her spouse if you haven't wept and prayed with them about the circumstances of their failing marriage. That's why, when you do have to say something hard to someone, you say it with love and concern for that person as a friend and fellow believer. And for the same reason, when we have to rebuke each other we do so as fellow strugglers and stragglers, feeling no need to pretend that we're something we aren't.

That's why it worked in the Snake Pit. General Schwarzkopf could hear Tom Bratton's rebuke because he could see Tom Bratton in front of him, with only one leg, and knew that Bratton knew the battle Schwarzkopf was fighting. And wanted him to win it.

“It is better to heed the rebuke of a wise person than to listen to the song of fools,” the Teacher of the Old Testament book of Ecclesiastes wrote. (Ecclesiastes 7:5) We'd all rather hear the song, I'm sure. But the song won't give us our lives back. The song won't confront our failings or push us toward repentance. It will comfort us when we shouldn't be comfortable. Make us forget what we ought to remember. It will give us excuses instead of conviction and leave us in bondage instead of setting us free.

“Those whom I love I rebuke and discipline,” says Jesus (Revelation 3:19). So don't imagine that you love someone if you're never willing to say something that they might find hard to hear. And if there are people in your life who can credibly call you to repentance for the stupid stuff you do, be grateful for them. God might use them to bring you back to life.

Let's be for each other what Tom Bratton was for Norman Schwarzopf. Let us behave toward each other in such a way that the love we have for each other is obvious. Let's understand clearly that we're all running the same race, all fighting the same battle, all trying to be true to our Lord while learning and growing in him. And let's understand clearly that we all stumble and struggle and spin our wheels, and that from time to time we need someone to kick us in the seat of the pants (spiritually, or maybe literally) and push us to straighten up. Never out of a desire to control, or punish, or make up for our own insecurites. Always for the same reason Jesus rebukes and discipline: love.

May there be a little more Snake Pit in our churches come Sunday.