A Small Man, A Big Day

Jesus said to him, “Today salvation has come to this house, because this man, too, is a son of Abraham. For the Son of Man came to seek and to save what was lost.” (Luke 19:9-10) 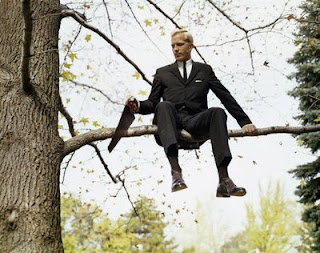 Most days, he wouldn't have even heard the insults. He had gotten accustomed to them. Hardened. When you had been across a table from as many red faces, clenched fists, and twisted mouths spewing hate and promising vengeance as he had, a few rude whispers don't usually even register. If it was any day but today, he wouldn't have noticed. Or if he had, he would have laughed it off. He would have laughed it off, then gone home to his big house and counted his money and laughed more, this time at the expense of the poor fools to whom his money had once belonged.

It was no surprise that they didn't like him; no one ever likes the person who collects their taxes. So he took more than the Romans demanded; that's just the way it was done. He didn't invent the system, but he was certainly going to profit from it as long as it was up to him. He could stand their insults. He could accept that no one of any reputation in Jericho wanted anyone to do with him. It was the price of success, the cost of having everything he ever wanted. Let them talk, let them hate him, let them exclude him.

Any day but today.

He couldn't explain why, but today was the day he had to see Jesus. He had arrived early at the town gate, waiting for him to come. He was a small guy, and he had picked out a really good spot by the main road, right by the gate, between some of the stalls in the marketplace. But then everyone else started to arrive. Someone moved him out of his original spot with a glare and a whispered threat. Then someone else moved him from the next spot he chose. As the size of the crowd grew, as a good spot from which to see Jesus became more valuable and rare, he was shoved, jostled, and nudged farther and farther from the road. All the while, they whispered. “What nerve he has. Jesus will want nothing to do with him. He's a traitor. He's a sinner.”

By the time the word began to ripple through the crowd that Jesus was near the city, all he could see were the backs of the crowd. They laughed at him as he tried to wriggle to the front. They laughed as he jumped to try to see over the heads of the people in front of him. They shoved him, knocked him down – one or two of the men even spit on him. All he could think was that he was going to miss seeing Jesus. They said he could do miracles. They said he could forgive sin. He wasn't sure what he wanted Jesus to do for him, but he knew he had to meet him. He was in a state of near-panic as a bustle at the gates indicated the rabbi's arrival. He's here, he thought. And I'm going to miss him.

That's when he noticed the tree.

It was about twenty feet tall, but its branches grew up and out over the road. If he could get to the lowest limbs, he'd be suspended over the heads of the frontmost people in the crowd. He'd have a perfect vantage point from which to see Jesus.

So he started climbing. It had been a while, but he awkwardly pulled himself up, feet sliding and scuffling to get some kind of traction on the trunk, arms shaking with effort as he hoisted his body up. The lowest limbs were about eight feet up, and he just barely made it. He picked one that looked thick enough to support him, and holding on with his arms and knees he started to inch out over the heads of the crowd. No one was paying any attention – by now their attention was on the road, and they were cheering. He could see the road well, and could see the group of travelers approaching. Jesus and his followers.

Something compelled him to try to get closer. He slid further out on the limb, arms and legs wrapped tightly around it. The bark pulled at his clothes and scraped his cheek, but he moved out farther toward the end of the branch. The group was close now, and he was just above the front row in the crowd, right at the edge of the road.

And then, he went a little too far, and the branch started to bend.

It didn't break, but it bent, and before he could do anything he was almost on top of the crowd below him. His branch bumped against the head of a man right under him, and the man looked up at him. Several of the crowd in the immediate vicinity turned to look up at him, clinging ridiculously to a bent limb. It occurred to him for the first time how silly he looked. As Jesus' group neared, he lowered his head, hoping now that maybe no one would notice him.

When the crowd got very quiet, he looked up. Less than a foot below him, Jesus was looking up at him. Their eyes locked.

“Zacchaeus? What are you doing up there? Get down here – how am I going to eat at your house if you're stuck in a tree?”

The crowd gasped audibly. Zacchaeus wondered if he'd heard correctly. A well-known rabbi, coming to eat with a tax collector? It wasn't done. But Jesus was waiting expectantly, so Zacchaeus backed along the branch until he got to the trunk and was able to climb down. Jesus waited patiently, offering a little advice on where Zacchaeus should put his feet, and within moments Zacchaeus was at the front of the group, leading them to his house. They ate, they talked, they laughed like old friends. And Zacchaeus suddenly knew why he had so wanted to meet Jesus. He was lonely. No one liked him. He didn't even like himself. But somehow he had known that Jesus would love him. Somehow he had known that sitting at a table with him would feel like the most natural, wonderful, right thing in his life.

He didn't plan it, but when the conversation lulled he heard himself speaking. He would give half of his considerable possessions to the poor. He would make restitution to everyone he had cheated; he would pay it back double, as the Law demanded. No, he'd pay it back four times. He didn't do it to make Jesus love him. He did it because he knew that Jesus did love him, would love him whether he did it or not. He did it because being with Jesus made doing what was right seem like the most obvious, natural thing in the world.

“Salvation has come to this house today,” Jesus announced, smiling. “This man, too, is a son of Abraham.” It had been a long time since anyone had associated him with Abraham. It had been a long time since he had remembered that about himself. He shook his head and laughed. He had given up a lot of money and possessions today. But he had gained so much more. In meeting Jesus, he had been given back his identity. He remembered who he really was.

Who would have imagined that all it would take was climbing a tree? he thought.