Near the cross of Jesus stood his mother, his mother’s sister, Mary the wife of Clopas, and Mary Magdalene. When Jesus saw his mother there, and the disciple whom he loved standing nearby, he said to her, “Woman, here is your son,” and to the disciple, “Here is your mother.” From that time on, this disciple took her into his home. (John 19:25-27) 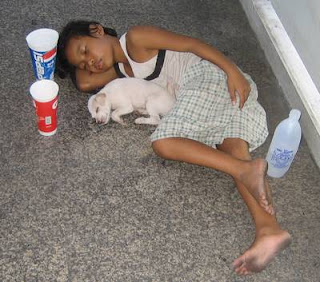 After a long time without someone to call Dad and Mom, Allison was finally adopted in December. She smiled as she realized that she'd finally get to be with a family for Christmas.

Allison is a licensed foster parent with the Department of Child and Family Services who was hired by Paul and Jill Keenon to run one of the foster homes in their agency, Open Doors for Teens. (odft.org) Without her biological parents since she was 19, Allison saw the family that Paul and Jill had built with their commitment to adopting teenagers that are too old for the foster system. They've adopted 8 children, and have 12 altogether. Over 400 teens have come through their door to be fostered through the years.

When Allison saw the Keenon family, she knew that a person never outgrows the need to belong.

The need for family.

In the Bible, the psalmist calls God the One who “sets the lonely in families.” (Psalm 68:6) In the Gospel of Luke, Jesus to some degree repudiates his own family to identify “those who hear God's word and put it into practice” as his family. (Luke 8:19-21) And at his death, Jesus showed how seriously he took the family that God had brought together by linking his mother Mary and his disciple John in a de facto family forged in the shadow of the cross: “Here is your son...Here is your mother.”

John took it seriously, too. He took her into his home.

It still is. It's no wonder that, almost from its very beginning, the church called each other “brother” and “sister” and “father” and “mother.” They were taking Jesus seriously, living on the premise that in Christ God was still up to his old program of placing the lonely in families. The church grew because of the power of the Holy Spirit and the hope of the gospel, yes, but also because that power and hope brought people together. In the good news of Jesus, God announced that human distinctions and divisions were over and that there was a place, a family, where everyone belongs.

Cut to world that feels today as if there are more people than ever who are without a place to belong, where people are valued – or devalued – based on arbitrary criteria and unjust standards. Cut to a world in which the church is seen as just another place where people are told that they don't belong.

Where did we go wrong? I think, at the risk of oversimplifying, that somewhere we got the impression that the church's job was to protect the gospel instead of proclaiming it. We decided somewhere that God really needed us to evaluate whether people were in or out, and so we set about doing that instead of what we were sent to do – that is, to call people into family at the foot of the cross.

Too touchy-feely for you? I understand that, I do. If being a part of the family has to do with Jesus, then we dare not ignore that. If he is the basis of our relation, then we dare not pretend that there is a relation without him. But neither dare we deny the sort of “quirky” family members a seat at the table. Families, after all, don't ask if everyone sees everything alike. They don't ask if it's convenient to take in whoever needs a home. They just open the door and set a place at the table.

Jesus warned religious people who were in the habit of excluding that what they created was not sons and daughters of God, but sons and daughters of hell. (Matthew 23:13-15) Let's be sure we're not in the same business. Let's set out to make sure that our churches are places where anyone, whoever they are, wherever they've been, whatever they've done, can belong. Where they can come to know Jesus, and come to know family, and come to realize that when we stand at the foot of the cross there is family everywhere we look.

And may that be more than just pretty words and good theology. May we intentionally “take one another into our own homes” by finding ways to show that we consider those who believe in the Word made flesh our brothers and sisters and mothers and fathers and sons and daughters.

Because family isn't easy, and it doesn't just happen by decree. One of the Keenons' other adopted daughters, McKenzie, says of her life as part of the Keenon family, “Even if it is chaotic here, it is peace.” Family on its best days can be chaotic. Family doesn't mean we always get along without conflict, always see everything alike, and never get angry or frustrated with or hurt by one another. It just means that, despite all that, we belong. At the end of the day, we're home.

Life in God's family can be chaotic. But it's peace. When we're there, we're home. We belong.

May we show our lonely, desolate, orphaned world what family really is.