In Season, Out of Season

Preach the word; be prepared in season and out of season; correct, rebuke and encourage—with great patience and careful instruction. For the time will come when people will not put up with sound doctrine...
But you, keep your head in all situations, endure hardship, do the work of an evangelist, discharge all the duties of your ministry. (2 Timothy 4:2-3, 5) 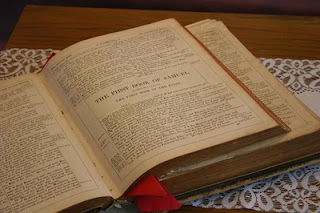 There are big changes afoot at my alma mater.

Harding University is a Christian university in a little town in Arkansas called Searcy. In an attempt to keep its Christian identity front and center, Harding keeps on the books and enforces some behavioral rules for their students that a lot of folks might consider, well, “quaint” is a nice term. And one of the rules at Harding, in particular, is one that students bump up against most every day. Every student takes at least one Bible class every semester.

You can imagine how that sits with a student who's, say, a marketing major. (That's not intended to imply anything about marketing as a profession.)

Inconvenience aside, that's probably the one rule that I'm glad Harding hasn't given up on. After all, how better to maintain an identity as a Christian center of higher learning than by ensuring that students study the Bible? It's gotten more difficult, though, as the student population has changed. Which has led to the changes at Harding. Curriculum changes.

When I was a student, and for decades before and after, incoming freshmen at Harding took New Testament Survey in the fall and Old Testament Survey in the spring. The classes were, as the names implied, intended to provide students with a survey of the entire Bible before subjecting them to more in-depth classes. Obviously, they covered a lot of ground quickly, assuming that most incoming freshmen had a basic knowledge of the Bible.

But Harding has found that incoming freshmen are now less likely to have that basic knowledge. That's probably reflective of a couple of factors: one is that incoming freshmen at Harding are less likely than ever before to come from “churched” backgrounds. That's actually a good thing. The other factor is probably less positive: people just don't know the Bible like they used to.

A recent study from another Christian educational institution, Wheaton College, showed that one-third of their incoming freshmen couldn't put the following in order: Abraham, the Old Testament prophets, the death of Christ, and Pentecost. Half could not sequence Moses in Egypt, Isaac’s birth, Saul’s death, and Judah’s exile. One-third could not identify Matthew as an apostle from a list of New Testament names. And when asked to locate the biblical book supplying a given story, one-third could not find Paul’s travels in Acts, half did not know that the Christmas story was in Matthew, and half did not know that the Passover story was in Exodus.

Other studies indicate the same trend. Yale theologian George Lindbeck says “When I first arrived at Yale, even those who came from nonreligious backgrounds knew the Bible better than most of those now who come from churchgoing families.” A poll a few years ago conducted by George Barna indicated an astounding lack of Biblical literacy even among churched Catholics, mainline Protestants, and Evangelicals.

Harding's experience is that many students are reporting that Bible is their hardest class. Thus, the coming curriculum changes: the survey classes will be stretched out and slowed down to take two years instead of one.

Personally, I appreciate that move. In some ways, the easiest thing for them to do might be to stop teaching the Bible altogether, or at least to stop requiring Bible classes. That's certainly the direction some universities with Christian roots have taken. Or, they could keep doing what they've been doing, all the while bemoaning the sad state of our world that kids go off to college without basic Bible literacy. Instead, they've chosen to adjust their approach, meet students where they are, and continue to teach the Bible to them, believing that the word of God contained in the Scriptures continues to bear fruit and change lives.

Harding's changes serve as a good model for changes in the church, where a good portion of the blame for that lack of biblical literacy can rightly be placed. Ever mindful of church members' tendency to go elsewhere if another church offers better perceived value, church leaders perhaps don't emphasize the teaching of the Bible as we should. We've chosen in the past few decades to emphasize the experiential aspects of the faith, while underplaying the doctrinal aspects. Bible texts serve only as “diving boards” for sermons - a place for the preacher to jump off. We've ignored historical and literary context and appropriated suitable passages as proof-texts for what we already wanted to say. The problem is summed up by the church youth leader who responded to a survey on biblical content in his teaching by saying, “It's hard to find time, but I can say that these kids are learning to love God.”

Well, how? And which God is that?

Our larger culture will likely never go back to a time when the majority of Americans was at least passingly familiar with the Bible. But that's all the more reasons for us to recommit to the study of the Bible in our homes and churches. Somehow, the study of the Bible has become equated with an antiquated world view where tradition and superstition ruled. Historically, though, a renewal in Bible study has ushered in whole new eras where fresh air flowed freely and new light brightened the darkness. It was the rediscovery of the Scriptures that brought about Josiah's reforms (that's 2 Chronicles 34. Full disclosure: I had to look it up) and punctuated Nehemiah's reforms. It was the study of the Bible that convinced the Ethiopian official that he needed to come to Christ. (Acts 8) It was when Martin Luther began to study the Bible that he found his guilt resolved and, incidentally, touched off the Reformation. It was through the study of the Bible that John Wesley found his heart “strangely warmed,” that Dietrich Bonhoeffer understood the cost of grace and opposed Hitler, that Corrie ten Boom found the strength and will to suffer in Dachau. And it was the Bible's concern for justice that made Martin Luther King, Jr. sit still in a Birmingham jail and led him to march on Washington.

The study of the Bible hasn't been rendered obsolete. It can and should still be done creatively, powerfully, and provocatively. Our kids aren't so enamored with their Xboxes and iPads that they can't be touched by the words of the Bible. We adults aren't so busy and jaded that the Bible can't speak to us.

In season or out of season, whether people seem inclined to put up with it or not, may we “correct, rebuke and encourage—with great patience and careful instruction.” May we proclaim the word, as preserved in Scripture. And may our study of the Bible bring fresh air and new light into our lives, homes, and churches.