In the first year of Belshazzar king of Babylon, Daniel had a dream, and visions passed through his mind as he was lying on his bed. He wrote down the substance of his dream.
Daniel said: “In my vision at night I looked, and there before me were the four winds of heaven churning up the great sea. Four great beasts, each different from the others, came up out of the sea...
“While I was thinking about the [fourth beast’s] horns, there before me was another horn, a little one, which came up among them; and three of the first horns were uprooted before it. This horn had eyes like the eyes of a man and a mouth that spoke boastfully. (Daniel 7:1-2, 8) 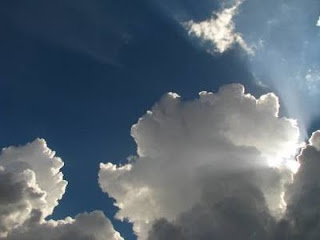 Jesus stood silently. Everyone present knew the two witnesses who had just completed their testimony had misquoted Jesus, twisted his words. But they also knew it wouldn’t matter. The court wanted to find Jesus guilty. The high priest wanted him crucified. This wandering teacher was too unpredictable, too subversive, too much a threat to the high priest’s tenuous relationship with the Romans. He had to go, and if the court needed to convict him on trumped-up charges, so be it. Jesus needed to speak; to defend himself, back the court into a corner has he had done time and again with the Pharisees. If he didn’t, he would die.
The high priest looked down at Jesus with the arrogant sneer of a man used to power. “What do you say to these charges, Jesus? How do you answer these accusations that you threatened to destroy the Temple and rebuild it in three days?”
Jesus stood silent.
“This court has the power to free you or put you to death. Answer these charges!” screamed the high priest.
Jesus stood silent.


“As I looked,
“thrones were set in place,
and the Ancient of Days took his seat...
The court was seated,
and the books were opened.
“Then I continued to watch because of the boastful words the horn was speaking. I kept  looking until the beast was slain and its body destroyed and thrown into the blazing fire.  (The other beasts had been stripped of their authority, but were allowed to live for a period of time.)
“In my vision at night I looked, and there before me was one like a son of man, coming with the clouds of heaven. He approached the Ancient of Days and was led into his presence. (Daniel 7:9-13)


The decorum and gravity of the court dissolved into a din of shocked whispers and outraged exclamations. Jesus remained silent, looking very much like a man who answered to a higher authority.  Finally, the high priest restored order. Stepping close to Jesus, he scowled into his face. Jesus fixed his eyes somewhere over the high priest’s left shoulder.
“Well, maybe you’ll answer this,” the high priest sneered. “Under oath to God - are you the Messiah? Are you king from David’s line - the Son of God?”
The trap was set. The high priest waited - waited for Jesus to walk into it.
Jesus’ gaze snapped into focus on the high priest’s face. The high priest tried to meet it, and found he couldn’t. He flicked his eyes around the room, took a step or two back. Finally, Jesus spoke.
“You have said so. But I say to all of you: From now on you will see the Son of Man sitting at the right hand of the Mighty One and coming on the clouds of heaven.”


He was given authority, glory and sovereign power; all peoples, nations and men of every language worshiped him. His dominion is an everlasting dominion that will not pass away, and his kingdom is one that will never be destroyed. (Daniel 7:9-14)


For a moment, the court was stunned. This peasant had turned the tables. He had as much as told them that they were on trial, not him. They were the beasts, the high priest just another arrogant ruler who had failed to recognize God at work - no better than the Babylonians or the Syrians or the Romans. He claimed that he was Israel, not them. He claimed that whatever they might do to him today, he would receive vindication, glory, and power from God and share it with those who truly were Israel.
There was only one thing to be done.
“He’s worthy of death,” the court shouted. They took turns, then, spitting on him. Striking him. Mocking him. “Prophesy to us, Messiah,” they laughed. “Who hit you?”
Jesus... stood silent.


“The sovereignty, power and greatness of all the kingdoms under heaven will be handed over to the holy people of the Most High. His kingdom will be an everlasting kingdom, and all rulers will worship and obey him.” (Daniel 7:27)
Posted by Patrick Odum at 4:05 PM