Jesus Has No Practice Squad


“Be dressed ready for service and keep your lamps burning, like men waiting for their master to return from a wedding banquet, so that when he comes and knocks they can immediately open the door for him. It will be good for those servants whose master finds them watching when he comes. I tell you the truth, he will dress himself to serve, will have them recline at the table and will come and wait on them....
"[T]he Son of Man will come at an hour when you do not expect him.”
-Luke 12:35-40 (NIV) 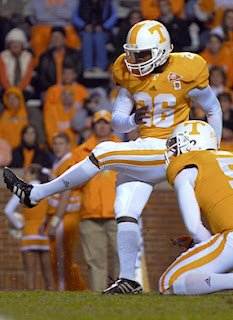 Derek Brodus assumed that he was going to have a typical Saturday night at his fraternity house at the University of Tennessee. The Vols were playing football against Middle Tennessee State on campus, but Derek wasn't going to the game; instead, he and some friends were going to watch on TV. They were settling in, waiting for the game to start, when the phone rang.
Brodus is a soccer player, and had walked on to the Tennessee football practice squad as a kicker. He didn't even have a uniform, as practice squad players don't participate in games. The voice on the other end of Derek's phone, though, belonged to someone from Tennessee's football office. They were sending campus police to pick up Derek immediately.
Tennessee had run out of kickers.
It was 6:10 p.m. An hour before kickoff.
Starting kicker Michael Palardy had injured himself during the week. Back-up kicker Chip Rhome pulled a muscle during pre-game and couldn't go. The football office told Derek to start walking toward Neyland Stadium - the campus police officer would meet him on the way.
Head coach Derek Dooley was thinking the same way you are: a frat boy, on a Saturday night? As Dooley put it, "an intoxicated Brodus is better than nobody. Get him. Just get him here. Give him a Breathalyzer." Fortunately, Brodus hadn't been enjoying himself too much.
While he put on his pads and uniform, he had someone help him stretch. Then he did a quick warm-up and ran out onto the field. In front of 100,000 or so fans, the guy who an hour before kickoff had been preparing to watch the game on TV kicked three extra points and a 21-yard field goal in Tennessee's 24-0 win.
What if Derek wasn't home when the team called? What if he'd had his phone off? Or just didn't hear it? Would anyone have blamed Derek if for whatever reason he wasn't able to get to the stadium to kick? Most likely, no one would have ever known, because there's no way that Derek Brodus could have expected the team to call. After all, how often does a kicker get hurt? Two kickers?
"Be dressed ready for service and keep your lamps burning," Jesus tells us who follow him. He uses the analogy of servants waiting for their master to come back from a wedding banquet. They might not know when he's coming, but they know he's coming and that he won't take kindly to having to wait for his servants to wake up and turn on the lights and unlock the gates for him. They and the household should be ready and waiting for him when he comes.
And all that's well and good. But then Jesus switches the analogy. Suddenly, his coming is  more like a thief coming at night. If a homeowner knows the thief is coming, he can take precautions against it. But that's sort of what thieves depend on - that the homeowner doesn't know. There’s no way to anticipate a break-in. They are unexpected, by nature.
The different analogies point to two things about Jesus’ coming that are equally true and  equally important. The first is that Jesus expects readiness from people who wear his name. Living in this world that values all things near, immediate, and sensory, we should nevertheless develop distance vision. Our worlds must extend beyond the things we can see, hear, taste, touch, and smell, beyond the things we can experience right now, beyond gratification that is immediate, beyond treasures that are tangible. This is perhaps the great failing of the Western church in our time: that we can’t see beyond concerns for our own standards of living and anxiety about our future standards of living enough to care for the poor and sick, love the alien and stranger, or proclaim the gospel of Jesus. In the terms of Jesus’ servant analogy, we’ve forgotten that the Master is coming back. Or we’ve convinced ourselves that he’s going to like the sweet rec room we’ve put in while he’s been away. Meanwhile, the household he’s left in our care is a wreck.
But the thief analogy reminds us that Jesus’ return is not under our control, within the sphere of our influence, or even open to our speculation. Some of us who wear his name seem to have been guilty of thinking that we’re privy to some inside information. We’ve predicted his coming so often that the people around us who don’t believe in Jesus can easily dismiss us - and him. We’ve predicted it so often with an untoward amount of joy and vengeance that they have trouble believing us when we talk like we know anything about the love of God. Jesus suggests that, while we shouldn’t be surprised by the fact of his coming, we very well may be shocked by the when and the how. It may be a lot farther away than we imagine. Or it may be much sooner. It may be nothing like we envision it. And we may well be astonished by who welcomes him and who cowers in fear. That’s as it should be. Imagining that his coming must be in line with our expectations is as good a way as any of not being ready.
So, may we simply do what he tells us. May we be always ready for service. Always clothed in the righteousness, peace, and love that Jesus has given us. May we always be about the business of his household: welcoming the sinners, the sick, the weak, the poor and proclaiming the gospel to them in word and act. When he comes, we might be surprised. But it will not be unexpected. And he’ll find us about his business.
I think he’ll get a kick out of that.1
We might even get extra points.2