Remember this: Whoever sows sparingly will also reap sparingly, and whoever sows  generously will also reap generously. Each man should give what he has decided in his heart to give, not reluctantly or under compulsion, for God loves a cheerful giver. And God is able to make all grace abound to you, so that in all things at all times, having all that you need, you will abound in every good work. As it is written:
“He has scattered abroad his gifts to the poor;
his righteousness endures forever.”
...Thanks be to God for his indescribable gift! 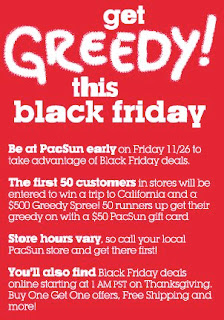 On Thanksgiving, presumably after enjoying a meal with family and friends, a woman in Porter Ranch, California, went into a Wal-Mart for a pre-Black Friday sale. She wanted to buy a discounted Xbox, it seems. As the store opened, and the mad rush toward the Xbox display started, at least ten shoppers suddenly began experiencing watering and stinging of the eyes, burning sensations on the skin, and pain in the throat. The woman had used pepper spray, apparently to clear other shoppers away from the display. In addition to those injured by the pepper spray, ten other shoppers were treated for minor bumps and bruises suffered in the ensuing confusion. The woman who used the spray got away. Police are checking security cameras and register receipts to try to locate her.
No word on whether or not she got her Xbox.
As retailers nudge the start of Black Friday earlier and earlier (even to Thanksgiving Night) in pursuit of greater profits, and as shoppers line up for the advertised bargains hoping to get more for less, maybe it’s time for people who believe in something more than greater profits and more stuff to offer a corrective to society’s sense of perspective. Given that Pepper Spray Lady doesn’t represent the values of most of the people around us, what she did still isn’t much more than a “logical” extension of the values that seem to be taken for granted by many in our world. Or, if you don’t buy that, it at least serves as an illustration of something we all know, but sometimes don’t really come to terms with: what we value determines how we behave.
So how about some new values as we head into the Christmas season? Or, rather, how about  we remind ourselves of some old values?
How about this one: “Whoever sows sparingly will also reap sparingly, and whoever  sows  generously will also reap generously.” The conventional wisdom of the world around us tells us, logically enough, that what we have depends upon our skill at getting. That’s what Pepper Spray Lady seems to have been thinking: “How can I get what I want, what I need, with all these other people wanting the same thing?” But Paul reminds us that what’s true in agriculture often holds true in the rest of life, too: Before you can expect to receive, you must learn how to give. If we can learn to give generously, we may be surprised to find that our generosity will come back to us.
Or what about this value: “Each man should give what he has decided in his heart to give, not reluctantly or under compulsion, for God loves a cheerful giver.” It sometimes seems that we give gifts at Christmas because we have to, or because it’s expected. We seem to be caught up in the monetary value of the gift, and whether those who receive our gifts will think we’re generous or not. It certainly seems that we often don’t give very cheerfully. Maybe we need the reminder that God loves those best who give with joy, happy for the opportunity to bless someone else. Sadly, it seems that sometimes our Christmas giving is empty of cheer.
And then there’s this value, maybe the most formative of them all: “God is able to make all grace abound to you, so that in all things at all times, having all that you need, you will abound in every good work.” While it seems that Christmas often reminds us of all that we have to do and buy, Paul wants us to remember the God who “make[s] all grace abound.” Whatever we may give, God gives first and best. What we really need comes from God, not from a store or a mall. Whenever we lose sight of God as the source of all that is good and necessary, we start to believe that it all depends on us and our lives become a frantic search for more, faster, and for less. And that leaves us little time or inclination to love others, or pursue anything outside of our own immediate interests, or praise God for his goodness and generosity.
And, of course, praise is the only worthy response to the “indescribable gift” that God  has  given us. He is the Original Giver, and in Jesus Christ has given us a gift that we have no vocabulary to describe. The grace, love, generosity, and hope wrapped up in that gift is far more than anything we could do for ourselves, far more than all the trinkets our world holds up as worthy of our desire.
So maybe that’s how, when our world heaves and swirls with unfulfilled desire, unmet need, and relentless want, we as people who are intimately acquainted with God’s indescribable gift can make the most difference. We can praise him. With our words, our actions, our contentment with what we have, our trust in his providence, we can declare our belief that he is the source of everything good and live lives characterized more by thankfulness and generosity than acquisitiveness and greed.
So let’s thank him, often and out loud. Let someone else have the last parking place at the mall or the last Xbox in the store. Let’s make sure that the way we prepare for and celebrate Christmas teaches our kids at least as much about cheerful giving as eager receiving. And let’s never imagine that God’s “indescribable gift” could ever be properly celebrated by stepping on or ignoring those around us.
And, please - watch out who you cross at Wal-Mart.
Posted by Patrick Odum at 7:22 PM