To the church of God in Corinth, to those sanctified in Christ Jesus and called to be holy, together with all those everywhere who call on the name of the Lord Jesus Christ - their Lord and ours.... 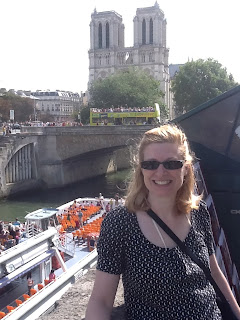 On a family trip to Paris this week, one of the things we've enjoyed is seeing churches. Paris is, of course, filled with historic churches. Their architecture is awe-inspiring, and the role they've played in the more than thousand-year story of the city is undeniable. It's been fascinating to tour them, photograph them, and learn their histories. Sacre Couer, St. Michelle, and, of course, Notre Dame: the names draw nods of appreciation and recognition.
Frankly, though, I expected to find them to be nothing more than interesting historical and architectural sites. I didn't imagine that I'd find thriving Christian communities.
And, well, I guess I didn't, exactly. To my surprise, though, I did find that these places are all pilgrimage destinations for some of the more mystical Catholic faithful from all over the world. Believers come from all parts of the globe to light a candle, say a prayer, go to confession or attend Mass. Not everyone is there just as a tourist; some are there to feel closer to God, or to find his healing or forgiveness, or on behalf of someone they care about. They have a sense of place to their faith, an idea that there are physical places where heaven brushes a little closer to earth, that I don't really understand.
I don't wish to negate those impulses, either, just because I don't necessarily understand them. Through the centuries, many Christians have done many things in the name of their faith that others didn't understand. That didn't mean they were wrong then, and it doesn't mean they're wrong now.
Still, it's not hard to see where that sense of place goes a little wrong.
When you have to push past people lined up at souvenir stands to get into the churches, it's hard not to imagine Jesus scattering rosaries and keychains and railing about turning his Father's house into a den of thieves. But, then again, would he? If that sense of place is so wrong, why would he care? For the same reason he cared at Jerusalem, I guess; merchandising in a cathedral probably makes it harder for some people to come to God, and for his Father to receive the honor he deserves.
I also wondered about the communities from which all the faithful came to Notre Dame or Sacre Couer. Do those communities, those churches, get the same kind of devotion? It's easier in some ways, isn't it, to devote yourself to a building thousands of miles away than it is to give yourself in love and service to fellow brothers and sisters in Christ right in your own town, your own neighborhood? Stone and wood and precious metals are beautiful and predictable. People are often, well, not. Sanctified in Christ Jesus and called to be holy as they may well be, people often disappoint, and do so on a grand scale. Sometimes it's just easier to think of a beautiful, majestic cathedral on the Seine as the church than it is a band of flawed people - like us - meeting in a storefront or corner lot or suburban strip mall.
And yet, back before cathedrals or corner lots in northwest Chicago or huge seeker-sensitive buildings in the 'burbs, it was those flawed people who Paul called the church. They owned no property together; some of them just opened their homes to the rest of them. They weren't incorporated, or tax-exempt, and they certainly didn't sell trinkets to tourists who happened by. They were just a band of women and men who "called on the name of Jesus" together. Some of them likely never met a Christian who they didn't worship with on Sundays.
Ironically, they might have had a better understanding of the larger world of believers than you and I do. Just as they were brothers and sisters with one another, so they were as well with "all those everywhere who call on the name of Jesus." They had a sense of place, but it was bound up with the people in every place who also wore Jesus' name. Where those people were, there was the church.
In our individualistic society, it's tempting to just dismiss the church as even relevant, to imagine we'd do just fine on our own. Yet, with no commitment to the church, our faith flags and falters.
But it's also tempting to imagine that our little structures, and he people who assemble there, are all there is to the church. It's easy to become arrogant, or narrow, or just unaware of others all over the world and throughout history who share our faith - sometimes in very different circumstances from us. We can learn much from one another.
Yesterday, we visited a building that was supposed to be a church, built by Louis XVI. Unfortunately for him, just before he finished it the Revolution came. Yet another church didn't seem relevant in Revolutionary France, and this one became the Pantheon - a temple to reason and crypt for some the great French luminaries of history.
That's what happens, I guess, when believers stop thinking the church to be relevant. We tend to abandon the faith, and deify Humanity.
Sunday, my family and I will visit yet another church. This one isn't a grand cathedral or beautiful chapel. It's a group of people who meet in just a regular building in Paris. We don't know them, and they don't know us. Yet, when we call on the name of Jesus together, when we share the bread and cup, they'll be family. And that, to me, will be a moment of more significance than anything that happened in any of those other churches.
I hope you'll have significant moments of your own this week, with living, breathing churches that serve the Lord, each other, and the world together.
Posted by Patrick Odum at 4:34 PM