Of Dropped Stones and Chicken Sandwiches

But Jesus bent down and started to write on the ground with his finger. When they kept on questioning him, he straightened up and said to them, “If any one of you is without sin, let him be the first to throw a stone at her.” Again he stooped down and wrote on the ground.
At this, those who heard began to go away one at a time, the older ones first, until only Jesus was left, with the woman still standing there. Jesus straightened up and asked her, “Woman, where are they? Has no one condemned you?”
“No one, sir,” she said.
“Then neither do I condemn you,” Jesus declared. “Go now and leave your life of sin.1
-John 8:6-11 (NIV)


I just wanted a chicken sandwich. 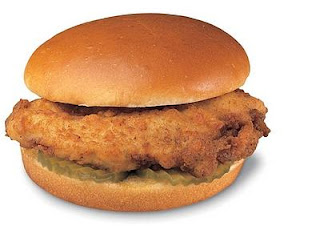 2 Non-religious people use other terms to label and marginalize those who disagree with their worldviews. Charges of “intolerance” and “hate” are currently two favorites.
Posted by Patrick Odum at 3:57 PM