Then people brought little children to Jesus for him to place his hands on them and pray for them. But the disciples rebuked them.
Jesus said, “Let the little children come to me, and do not hinder them, for the kingdom of heaven belongs to such as these.”
-Matthew 19:13-14 (NIV) 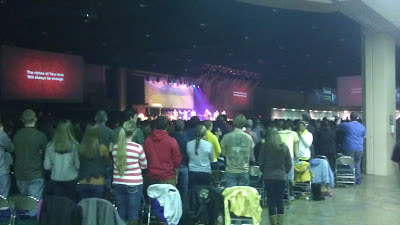 You know those people that free climb mountains, or jump out of perfectly good airplanes, or shoot down snowy slopes on skis or snowboards? People who wrestle alligators and go deep-sea diving and get bicycles and motorcycles and snowmobiles airborne in the X Games? Adrenaline junkies?
They’ve got nothing on me.
Last weekend, I hung out with 13,000 teenagers and their youth ministers and chaperones at Winterfest, a gathering for Christian teens in Gatlinburg, Tennessee.
In all seriousness, I had a great weekend. I knew I would. But there’s something surprisingly encouraging about being with that many Christian teenagers. I’d challenge anyone who has fears about the future of the church - and there are lots of those folks out there - to go to Winterfest next year and pay attention. Not to the speakers. Not to the style of singing. Not to the way the young men and women are dressed, or their general rowdiness, or to the unsettling way they tweet constantly during the group assemblies, or the fact that they don’t stop what they’re doing and genuflect whenever an “adult” walks by.
Instead, pay attention to their sincere love for the Lord. Pay attention to their faces in worship. Pay attention to the girls crying on each others’ shoulders in conviction, to the guys characteristically making jokes to cover the lumps in their throats. Don’t dismiss that emotion as mere teenaged histrionics, because to do so is to miss the fact that at an important time in their lives they’re open to the work God is doing in them.
Pay attention to the tens of thousands of dollars raised by two girls there who wanted to do something about feeding hungry children, and the hard-earned money flowing from teenaged hands to their bucket. Pay attention to the way they sat and listened and laughed and clapped for four “old men” who spoke to them - each for a pretty long time.
I’ve long noticed the principle that the cool devotional songs that I sang as a teenager have suffered the indignity of being published with musical notation in song books and actually used in worship services. What’s trendy and new to teenagers often becomes a part of the church’s life over twenty years or so. That being the case, I’m thinking that the church ought to start getting used to a few of the changes that are coming over the next couple of decades:

Technology is going to be ubiquitous. We’ve raised a  screen-dependent generation. There were screens everywhere; everyone in the large venue needed sightlines to at least two screens. What the printed page has meant to the church over the last 500 years, screens are going to mean to the church going forward. (The technology failed one of the speakers, and his presentation pretty much ground to a halt for the five minutes or so it took to get it fixed.)
And not just screens. You know how in some churches we tell people to turn off their cell phones? The Winterfest organizers encouraged the kids to tweet during the assembly. What I might tend to call a potential distraction, they viewed as an opportunity for participation, a way to create a connected community out of an isolated, passive audience. There may be times when believers need to get away from screens and technology, but those times will increasingly be seen as a novelty. Churches need to consider how we’re using technology, and how we can use it better to communicate the gospel and bring our people together.

Authentic relationships will be vital to healthy churches. Our teenagers don’t want superficiality. (Even though sometimes we think that’s all they want.) They want real relationships - and not just with each other. They want older believers to take an interest in them, to be real with them, to share their faith, teach them - and also to learn from them. They want their churches to be about more than ritual, habit, and form. And they value diversity and want to include those who aren’t exactly like them - even if they don’t know how to go about it. We need to think about what it communicates to the teenagers in our churches when we know their names, celebrate their accomplishments, and enjoy their company. And what it communicates when we don’t.

Depth will be valued. Teenagers don’t want someone to tell them what to think. They want to be taught how to think. They value the Bible, but they don’t want someone else to tell them what it means. They want to be challenged, not spoon-fed. They can handle deep sermons and lessons, and they can also detect propaganda and platitudes. They live in a complicated world full of difficult choices, and they don’t trust ready-made answers. They don’t need to be coddled, or to have the gospel packaged for their convenience. But they know in a second when a church’s theology and doctrine is a mile wide and an inch deep.
They don’t mind having their convictions shaken and tested, either. And they don’t mind being called on the junk in their lives. They just want it to be by honest, authentic people who seem to be wrestling with the same questions that haunt them. Contrary to our caricatures, they can go deep and handle being challenged. Shallowness, in fact, is what they can’t abide.

The church will find new ways to express the gospel. In twenty years, the church will still sing, and read Scripture, and share in the Lord’s Supper. Good preaching can still inspire and challenge this generation, but it won’t be your grandparents’ preaching. And check out David Bowden, who was one of the contributors to the Winterfest assemblies - slam poetry in church, imagine the possibilities! (Though, as an old fogey, I have to say that the knit cap sort of feels like overreaching for hipster cred...)
What did Jesus say about new wineskins? While we can’t change the gospel, the way we communicate it is open for experimentation. We know that, but sometimes we don’t consider carefully enough how much we confuse the form with the message. The gospel is the gospel, whether the preacher’s words rhyme or not.

In the next twenty years, as today’s teenagers grow to adulthood and places of leadership in the church, the church is sure to change. May we never be disciples who stand in the way of younger generations as they come to Jesus. May we be thankful for the power of the gospel to knit generations together. And may we always be able to recognize and thank God for the devotion and faith of younger generations.
Even if we don’t much like slam poetry.
Posted by Patrick Odum at 3:55 PM