As it is, there are many parts, but one body.
The eye cannot say to the hand, “I don’t need you!” And the head cannot say to the feet, “I don’t need you!”    On the contrary, those parts of the body that seem to be weaker are indispensable, and the parts that we think are less honorable we treat with special honor. And the parts that are unpresentable are treated with special modesty,   while our presentable parts need no special treatment. But God has put the body together, giving greater honor to the parts that lacked it, so that there should be no division in the body, but that its parts should have equal concern for each other. If one part suffers, every part suffers with it; if one part is honored, every part rejoices with it. (1 Corinthians 12:20-26) 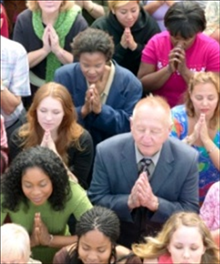 Everyone wants diversity.
It’s a shared value in our world. Unquestionably admirable. No one has to specify positive diversity, or good diversity, or desirable diversity. Just diversity. Every organization tries to display it. Every company touts it in their hiring practices and leadership structure. Every school, every university, sells itself with diversity.
You can tell it’s regarded as a positive thing in our culture because few dare to question it out loud. You can tell it’s a good thing in that, where it’s missing, folks try to cover up its lack. Everyone wants diversity. Churches included.
Maybe especially churches.
For churches, it’s different. For other organizations, diversity is often good business, or good public relations. It can be for churches as well, of course, but that’s not the only reason for it. For churches, it’s more than that. It’s gospel. The gospel calls us to diversity. Whatever makes human beings different, we’re the same in that God created us, Jesus died for us, and through him the Holy Spirit lives in us. For believers in Jesus, differences take on a milder hue in light of the gospel. Believers are members of one body - Jesus’ body. Distinctions between us are made secondary to the work of God in the world, and to our places within that work.
Those differences between us don’t disappear, though. That’s the flip side of diversity. Everyone wants it - but it’s hard. Everyone wants it, but there are a lot of factors working against it. Whatever lip service our culture might give to diversity, there are lots of realities that squash it and kill it. Even in the church.
It might be debatable whether or not Martin Luther King, Jr.’s pronouncement of  “11:00 on Sunday morning” as “the most segregated hour of this nation” still holds true, but the fact is that churches still find diversity hard. A recent study by Nashville, Tennessee - based LifeWay Research bears this out. The study asked church leaders if they believed that every church should strive for racial diversity. Not surprisingly, 85% of Protestant church leaders said yes. Asked the same question, 78% of Americans agreed.
Asked whether their church has more than one predominant racial or ethnic group, only 13% of the church leaders said yes. Asked whether they would be most comfortable visiting a church where multiple races or ethnicities were represented, 51% of Americans said yes.
Diversity is great as an aspiration. It seems harder to work out in reality.
Admittedly, diversity isn’t just a race/ethnicity thing. It can be about economics, or age, or gender. The bottom line, though, is that the gospel brings people who are different together. And if that’s not happening in church, then it’s probably because there are some unhealthy practices and attitudes that have made their way into the life of the church, and they can probably be grouped together under the heading, “favoritism.”
The truth is that we human beings tend to show favoritism to those most like us, or to those we most admire and want to be like. That means, usually, that we favor the majority race or ethnicity (whatever it may be). It means, usually, that we favor the wealthy, because we like their lifestyle and like to associate with them. It means that, all things being equal, we favor those who have power over those who don’t, those at the center over those at the margins, those most like us over those least like us.
Trouble is, God turns that on its head. And the gospel invites - even demands - that we do the same.
The gospel doesn’t just tell us why we should be diverse. It teaches us to treat those who are different in ways that bring us together. In Paul’s body analogy, he points out that the parts of that are “unpresentable” are treated with “special modesty,” and that the parts that are less honorable receive special honor. He points out, on the other hand, that there are some parts of the body that don’t need much special treatment.
You get the point. While our tendency might be to show favoritism to those most like us, to the admirable, to the powerful, to the important, the gospel demands that we show favoritism to those different from us, to the less admirable, to the weak, to the insignificant, and to the marginalized. It’s not enough to be “fair.” To be the kind of diverse body the gospel calls us to be, we have to show special honor to the parts that might lack it.
That might mean we honor other cultures in our churches beside the dominant one with our choices in worship songs or language. It will mean that we’ll give special thought and prayer about elevating members of those minority cultures to positions of leadership and decision-making.
It will mean covering those among us struggling publicly with sin, offering them the clothing of grace to hide their vulnerability. It will mean helping those who need help with dignity and sensitivity. It will mean that there is a responsibility that goes long with power and privilege in the church: the responsibility to protect, love, and serve with humility.
It will mean that “haves” will share with “have-nots,” that we’ll show hospitality. It will mean that those who have special privileges by virtue of their wealth, or reputations, or citizenship will share with those who don’t.
It will mean that we’ll celebrate with those who celebrate, and weep with those who weep, instead of using privilege as an insulator. It will mean that we’ll find ways to stand with those who need a friend, speak for those who have no voice, and affirm that we’re together because God wants us together.
Diversity in the church doesn’t just happen with the right hires or strategies. It happens because believers take the gospel seriously, and do the hard work of living it out by reach out in love to the marginalized, as Jesus did.


Then maybe, finally, diversity will be more than an aspiration.
Posted by Patrick Odum at 3:09 PM