A Lament for Mother's Day

Then Simeon blessed them and said to Mary, his mother: “This child is destined to cause the falling and rising of many in Israel, and to be a sign that will be spoken against, so that the thoughts of many hearts will be revealed. And a sword will pierce your own soul too.”
-Luke 2:34-35

Near the cross of Jesus stood his mother…. When Jesus saw his mother there, and the disciple whom he loved standing nearby, he said to her, “Woman, here is your son,” and to the disciple, “Here is your mother.” From that time on, this disciple took her into his home.
-John 19:25-27 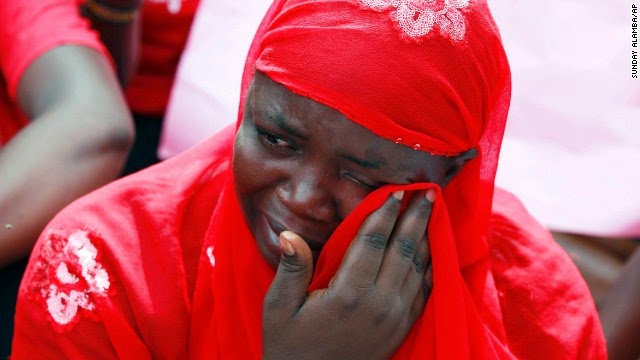 This Mother’s Day, I’m thinking of moms over 6,000 miles away from me in Chicago.
Oh, I’m thinking of my mom, just about a tenth of that distance away. I’m thinking of my wife, too. But on my mind this year are moms: 276 of them, for whom America’s Mother’s Day will be just another day filled with anxiety, fear, anger, and grief. In short, a day like every one that’s come and gone since April 14, when their girls were abducted from their school in Chibok, Nigeria, a wide place in the road in the rural northeast of the state.
Unless you’ve made a determined effort to avoid news the last few weeks, you know about the abduction of the girls from the Government Girls Secondary School by Boko Haram, a militant organization whose aims are - well, not worth writing about. They’ve threatened to sell the girls on the slave market. While Nigerian president Goodluck Jonathan says he thinks the girls are still in Nigeria, US and other intelligence organizations fear they have been divided into smaller groups and taken to neighboring countries.
Sadly, many of us in America see this as a “Muslim thing,” a skirmish in the ongoing war between “the good guys” (the Christian West) and “the bad guys” (Muslims). Of course, calling Boko Haram Muslim would be similar to calling the Ku Klux Klan Christian. Muslims all over the world are pointing out what we in America should already know: that Boko Haram’s aims are not “Muslim,” except in name, any more than the Crusader’s aims were Christian.
I can think of 276 moms who couldn’t care less right now about ideology, or Christianity vs. Islam, or America’s self-serving “culture wars.” Right now, they care about what most every mother cares about and works for and gives herself to accomplish: the safety or their children. Right now, they would all change places with their daughters if they could. Right now, they care about nothing in the world other than that their daughters come home.
To politicize this abduction misses the point. To make it a morality tale or use it as a case study on the violence of Islam is to trivialize it. It boils down to 276 families who wanted their daughters to be educated, to have opportunities that perhaps they themselves never had. It boils down to 276 moms trying to give their daughters better lives, and the fanatic wing nuts who couldn’t stand it, who couldn’t fit the education of girls into their stunted, pitiful, paranoid world views. The Nigerian government - which seems unsure of how to deal with Boko Haram - and the other governments of the world - who can’t seem to figure out how involved they should be - need to understand that this isn’t about them. It’s about something bigger: those girls, and the moms waiting for them. The world is watching this, and this is one of those moments when the world must come together to say, “Enough is enough. A line has been crossed. This is not acceptable.”
Here’s the thing: Boko Haram has been getting away with this kind of thing for years.
Imagine if a girls’ private school in, say, a wealthy suburb of Boston, or Chicago, or Los Angeles had experienced a mass abduction.
It’s easy to dismiss something happening on the other side of the world, in a part of the world where violence seems so commonplace. But once you start doing that, you start dismissing stuff that happens in the inner city, that doesn’t seem to affect your suburban life. Or you start dismissing stuff that happens outside the gates of your neighborhood. Or even on your own street.
But those mothers, those 276 Nigerian mothers, are on my mind.
At least some of them are Christian. At least 7 of them are part of my heritage, the Churches of Christ.
Maybe that helps to make it more immediate. But, I suppose, it shouldn’t. Whoever those girls are, whoever their families are, they’re children of God. They’re the work of his hands. Whatever they call him when they pray to him, or whether or not they pray to him at all, they’re his. And those men who took them didn’t just attack a nation, or a religion, or an ideology. They attacked him.
So I think Glenn Pemberton, a professor at Abilene Christian University, is on the right track when he posts this prayer, this psalm of lament, on his Facebook page:

God, with due respect, these girls are still alive;
please turn the camera of every news station on these girls
and on their desperate families….

Forgive us for not seeing this sooner,
forgive my blindness.
If these young girls were Americans,
we would be screaming for action, yesterday!

I know there are enormous cultural differences,
complexities I do not understand,
even so…please help us,
help these girls and their families,
and please bring these men to justice.

You will be blessed by reading the whole thing.
And I’m thinking of another mother in another wide place in the road on the other side of the world, two thousand years ago. A mother who had scarcely welcomed her child into the world before she was told of a sword that would pierce her soul - a sword those Nigerian mothers must understand well today. I’m thinking of a mom who stood at the foot of a cross and watched that son writhe and bleed and die. I’m thinking of his concern for her, and I’m thinking of his concern for other hurting mothers, and for the daughters they weep for, and for the captors who hold them. And I’m thinking my own circle of concern is pitifully small and ridiculously small-minded. And I’m thinking that if I wear his name, then this Mother’s Day, as I ask God to bless my mother, and my wife, and my mother-in-law, and the mothers in my church, that I must also remember to ask him to bless those hurting mothers in Nigeria. I must remember to ask him to act, through his own power, through the combined outrage of the world, through whatever means he chooses, to rescue those girls.


There are a lot of mothers right now counting on that.
Posted by Patrick Odum at 3:08 PM