Now there was a man in Jerusalem called Simeon, who was righteous and devout.  He was waiting for the consolation of Israel,  and the Holy Spirit was on him. It had been revealed to him by the Holy Spirit that he would not die before he had seen the Lord’s Messiah. Moved by the Spirit, he went into the temple courts. When the parents brought in the child Jesus to do for him what the custom of the Law required, Simeon took him in his arms and praised God…
-Luke 2:25-28 (NIV) 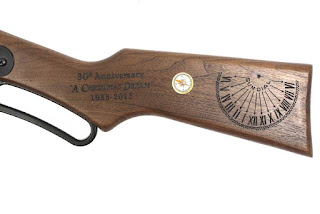 Do you remember, like I do, laying awake Christmas Eve? You seemed to lie there forever, too excited to be still, to close your eyes, much less go to sleep. The poem says “not a creature was stirring,” but you were certainly stirring, probably not with visions of sugarplums but Barbie or G.I. Joe or a new bike  or “a Red Ryder Carbine Action 200-shot Range Model air rifle with a compass in the stock and this thing which tells time” dancing in your head. Whatever you were waiting for, sleeping was out of the question. All you could do was lay there and wait. (For, like, 45 minutes, and then you were asleep. But it seemed like the whole night.)
That’s what anticipation does to you, doesn’t it? It’s a wormhole that slows down time.
I bought movie tickets weeks ago. I don’t ever do that; with the same movie showing on 75 different screens, why bother? But the movie I bought tickets for isn’t just any movie — it’s Star Wars, Episode VII. I hoped it would happen, even though there didn’t seem much reason to think so. And then when George Lucas sold Star Wars to Disney, I started to think it might happen. And then they announced it, and then the trailers started appearing. And now it’s almost here. The week’s going to crawl by.
One of the things that happens as you grow up is that you lose your sense of anticipation. Take Christmas, again, as an example. Now, if we lay awake before Christmas is because we’re making a list of all the things we still have to do. Wonder is replaced with dread. Joy gives way to fatigue. There are gifts to buy at malls full of people who are as stressed as we are. Decorations to put up, food to prepare, travel plans to make. At some point the problem with Christmas isn’t that it takes forever to get here. It’s that it doesn’t take long enough.
Simeon is one of the background characters of the Bible. He’s a part of the scenery. But when we meet him in the Gospel of Luke, we’re reminded that even the background characters in our lives have stories. Simeon’s story, says Luke, is that he’s been waiting. Maybe better, anticipating. He’s looking forward in hope for what Luke calls “the consolation of Israel.”
That’s an Old Testament thing. It’s a promise for those who pursue righteousness and seek God that the day is coming when he will wipe away the tears of his people, take them in his arms, and comfort them. The memories of their hardships will fade and be replaced by joy, gladness, and thanksgiving.
Sometimes we lose sight of that hope. We think that if we don’t console ourselves, no one else will. And so we lose our sense of anticipation over what God will do while we rush around trying to make life work on our own terms. In the process, we can easily run roughshod over others and add to the pain and sorrow in the world around us.
Simeon didn’t forget. He had probably lived a long life, long enough to see a lot of ugliness and experience a lot of grief. But he hadn’t lost his anticipation for God’s promised consolation. He had laid awake at night thinking about it. He had bought into it long ago. And so when the Holy Spirit nudged him that day to go the temple, he went. Maybe he wandered around for a while, not knowing what he was supposed to be looking for. But then he saw this young couple with a baby, and he knew.

“Sovereign Lord, as you have promised,
you now dismiss your servant in peace.
For my eyes have seen your salvation,
which you have prepared in the sight of all people”

In some impossible way, this child would be God’s salvation. He would bring comfort and consolation to God’s people. Simeon didn’t have to be alive for it — he had seen it. He knew that God’s plans sometimes take more than one lifetime to come to completion. But he had seen it all the same, staring into that baby boy’s eyes and feeling his fist around his finger.
Maybe it’s no surprise that Jesus called the Holy Spirit the Comforter, the Consoler. Jesus has sent him to us to stoke the fires of anticipation, to remind us that Simeon wasn’t wrong. Jesus is still the consolation of God’s people. He’s the one through whom millennia of anticipation are fulfilled. We’ve seen his salvation in Jesus, and we’ll see it in fullness when he comes again. And until then he lives with us and in us to remind us not to lose our hope.
So please don’t. Don’t sleepwalk through life, blind and deaf and dead to the signs of hope that Jesus will awake in you. Don’t make the mistake of thinking that consolation is something we can do for ourselves. Don’t lose your sense of joy and wonder in God’s salvation. And if you find yourself forgetting this Christmas, then go back to the beginning of the story, before the gifts and parties and what we’ve made of Christmas. Go back to a baby boy, and see in his face the consolation of God’s people. The end of death and grief and pain and hatred and violence. Your consolation.