[The kingdom of heaven] will be like a man going on a journey,  who called his servants and entrusted his wealth to them. To one he gave five bags of gold, to another two bags, and to another one bag,  each according to his ability.  Then he went on his journey. The man who had received five bags of gold went at once and put his money to work and gained five bags more. So also, the one with two bags of gold gained two more. But the man who had received one bag went off, dug a hole in the ground and hid his master’s money.
-Matthew 25:14-18 (NIV) 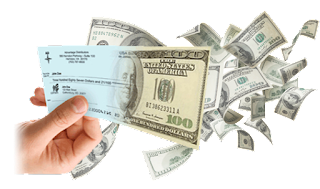 Sean Weatherspoon has changed jobs — and cities — a couple of times in the last few years. He’s moved from Atlanta to Phoenix and now back to Atlanta. And sometimes when you move, it’s hard to keep track of things.
Like, for example, a paycheck from 2015.
Sean, who plays linebacker in the NFL, was packing after being traded by the Arizona Cardinals back to the Atlanta Falcons when his girlfriend came across the the check: one week’s check for around $138,000. He apparently hadn’t even missed it.
Now, I have to admit to misplacing a check once or twice. But I knew pretty quickly that it was gone. And there was never one worth $138,000.
I think Sean might want to look into direct deposit.
Apparently Sean isn’t the only pro athlete to run into this problem, either. Former Cleveland Indians slugger Manny Ramirez once had the team contact them because their books were off by a million dollars or two: the value of a drawerful of paychecks Ramirez had apparently neglected to cash.
Jesus told a story to explain what it’s like to live under the reign of God, a story about a wealthy man who called the household staff together and gave them some cash to use to do some business on his behalf while he was away on a trip. He was the kind of guy, apparently, who expected his people to produce some results with what he’d given them, so when he returned he asked them to open the books. Two of his agents had doubled their master’s money, but it’s the third that Jesus is particularly interested in. This guy, concerned about how tough the boss could be when he didn’t get the results he wanted, pulled a Weatherspoon. He didn’t lose what he had been given, but he didn’t use it either.
In case the point of the story isn’t clear, it’s this: people who want to live under the rule of God need to use what he’s given them to do his business.
We can easily forget this, living as we do with a form of Christianity that more often than not seems to stress what we shouldn’t do. But life with Jesus was never supposed to be about hunkering down and holding on, digging in to our trench works and keeping our heads down while the battle rages around us. Personal salvation and piety has never been the goal for which Jesus came.
The marching orders sound more like this: “Proclaim this message: ‘The kingdom of heaven has come near.’ Heal the sick, raise the dead, cleanse those who have leprosy, drive out demons.” A heavy responsibility it is to do kingdom business, to preach the message of the kingdom of God coming near while showing exactly what that means, and what difference it makes. If it were entirely up to us, in fact, we’d think it was beyond us. And we’d be right. But it’s not — not entirely up to us, that is. “Freely you have received,” Jesus says. “Freely give.”
And so what we’re supposed to do is take what the Lord has given us, go out into the world with it, and use it to “heal the sick, raise the dead, cleanse those who have leprosy, and drive out demons.” We’ve been give much, but not just for ourselves and those we love.  The Lord has given to us freely so that we can give freely to the world around us. So that they might see what life in the Kingdom of God looks like.
So we mustn’t Weatherspoon it. When we fill our prayers with orders for the blessings we want God to bestow on us and on our loved ones, without any thought as to how he might want us to use the blessings we already have, we’re Weatherspooning it. When we’re too caught up in the urgency of day-to-day life  to notice the ways we might put what he’s blessed us with to work for him in the world, we’re Weatherspooning it. When we’re callous to the ways that sin, poverty, injustice, disease and death have defaced God’s creation, and callous to the ways in which we can put things right, we’re Weatherspooning it. When we’re so afraid of failure that we don’t even try, so intimidated by how bad things are that we don’t even try to do good any longer, we’re stuffing God’s blessings in a drawer.
Time for us to turn those drawers upside down and see what resources we’ve been hiding. Some free time, maybe, now that the kids are grown. Some discretionary income. Maybe you’re good at prayer, or have a lot of musical ability, or can drive a truck. Maybe you’re handy around the house, or exceptionally compassionate, or love children, or are a good listener. These are your bags of gold, your talents, and they’ve been given to you by the Lord so that you can invest them in his kingdom.
I don’t know what Sean Weatherspoon wants out of life, but I know this: in the drawer, that paycheck wasn’t going to help him get it. You know what your Lord wants. You know what he wants to happen in your world, in the lives of people around you. And between you and your church, he’s given you what you need to get busy with his business.  Freely you have received. Freely give.


What have you left in the drawer?