“Hear my prayer, Lord, listen to my cry for help; do not be deaf to my weeping. I dwell with you as a foreigner, a stranger, as all my ancestors were.
-Psalm 39:12 (NIV) 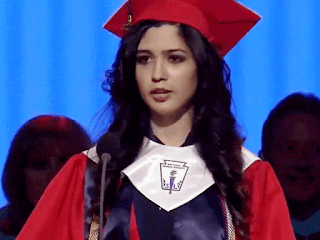 Larissa Martinez moved to McKinney, Texas, from Mexico City in 2010, when she was 12 years old. Her mother had to work long hours to provide for Larissa and her sister, and Larissa had to take on responsibilities for her little sister that most 12-year-old girls in America don’t have to think about. “School became a safe haven for me,” Larissa says, “because despite not having internet, a washing machine, or even my own bed, I always had knowledge at my fingertips thanks to the library at my school.”
Apparently, Larissa made good use of that library. She finished her high school career with almost a 5.0 GPA, and has a full ride to Yale in the fall. Last week, at McKinney Boyd High School’s graduation ceremony, Valedictorian Larissa Martinez spoke to her classmates and, as it turned out, a good portion of the world. Ironically for a girl who didn’t have internet access at home, her speech went viral.
In her address, Larissa identifies three “Unexpected Realities” that have marked her life. The first was being an 11-year-old girl with an abusive and alcoholic father who naively thought that becoming an American would solve all her problems. The second was, at 12, trying to fit into a new culture while having her intelligence and accomplishments questioned and unacknowledged. As for the third — here, I’ll let Larissa tell you in her own words:

“Well, after all of these years, I’ve finally mustered up the courage to stand before you and share a struggle I’ve had to deal with each and every day. Unexpected Reality Number Three: I am one of the 11 million undocumented immigrants living in the shadows of the United States. I decided to stand before you today and reveal these Unexpected Realities because this might be my only chance to convey the truth to you that undocumented immigrants are people too.”

I encourage you to watch Larissa’s speech. It will give you hope for the future, and it just might  change the way you think of undocumented immigrants. (Her opening joke about Beyonce and President Obama is pretty good, too.)
I know, immigration is a thorny political issue. Voices get pretty loud and strident on both sides of the debate, and both sides of the debate occasionally make some pretty good points as well. I don’t pretend to have answers; I don’t even know what questions to ask. Clearly, the system we have doesn’t work very well to deal with the sheer number of immigrants coming to our borders. (Larissa mentions in her speech that she’s been waiting for years for her application to even be processed.)
There’s a lot of space between those on one side who like the idea of a wall on the border, and those on the other who think we might as well do away with the border. But if you can listen to Larissa’s speech and still think that the immigration debate is simply a matter of law, then let me respectfully suggest to you that you’ve missed the point. Think of the myriad ways that Larissa’s life would be different if she and her mother weren’t living in America. Because they’re here, Larissa had teachers who didn’t ask for a green card, a school library with doors open for her.
Go back to the Old Testament and you start to notice a trend: God’s people have always been foreigners. Abram (Abraham) was told to leave his country and go to one that God would show him, and God promised him that one day he’d give the land which he lived in as a foreigner to his descendants. Moses was a Hebrew born in Egypt, and later lived as a foreigner in Midian. In view of their historic status as foreigners, God included in Israel’s Law a requirement that they should treat foreigners well.
God revealed himself to Israel as a God who “loves the foreigner residing among you, giving them food and clothing.” (Deuteronomy 10:18) Foreigners in Israel were invited to share in the joy of community celebrations, feasts, and worship, and they were not to be deprived of justice. They were to be provided for through charitable giving. God even promises to testify against those who treat foreigners unfairly.
Apparently, when Israel found security and prosperity in their own land it was easy for them to forget that they had once been foreigners in a strange land too.
So maybe, as God’s people, what we need to do before we can add something meaningful to the immigration debate is to remember that we are foreigners too. Whatever your birth certificate or your passport says, believers in Christ are to live as foreigners in this world. We’re citizens of a different country, and our hope is not in the security of our jobs or our property values or our children’s access to the Ivy League.
We’re called in Christ to cast our lot with the One who didn’t have a place to lay his head, and with those who through the centuries have looked with faith for God to build them a city where they would be truly at home. If our attitudes toward the foreigners among us don’t look much like God’s, then it may be because we’re too at home here, too invested in being secure and prosperous in our nice neighborhoods, in our kids’ schools not being “burdened” with too many ESL students. It might be because we’ve forgotten that, in the words of Larissa Martinez (but also in the spirit of the Bible), “immigrants are people too.”
That’s not primarily a political position. It’s not to say that there shouldn’t be immigration laws. None of us, though, are given the responsibility for enforcing whatever laws there may be. We are, however, given the responsibility to treat the foreigners among us with love, justice, respect, and care. We have to ask ourselves honestly how much of our attitudes toward immigrants around us comes from a desire to preserve our security as Americans. And whether that desire might conflict with our status as citizens of the kingdom of God.
Let’s not forget where our true citizenship is. Then we’ll remember how to treat foreigners among us.