From Judge to Friend 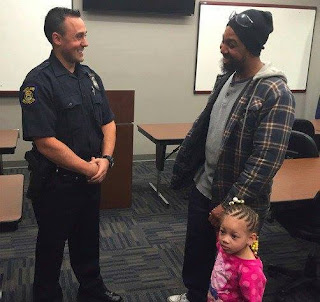 When Lavante Dell was pulled over by a police officer in Westland, Michigan, he probably had an idea of how it was going to go.
Lavante, a black man, was pulled over in the predominantly white Detroit suburb for having tinted windows on his car. As the officer, Joshua Scaglione, was walking back to his car to run Lavante’s license and registration, he noticed Lavante’s 3-year-old daughter in the back, belted in but not in a car seat. Officer Scaglione asked Lavante why the girl wasn’t in the appropriate seat, and Lavante began explaining that he couldn’t afford one. That’s when Officer Scaglione asked him to get out of the car. And this, no doubt, is where Lavante thought it could go bad. There are too many stories, after all, that start just this way, with a white police officer asking a black man to get out of the car. But Lavante got out.
Officer Scaglione  asked for some more information about his financial situation. Then he asked where he was going. Finally, he asked, “Can you follow me to Wal-Mart?”
And that’s how it came about that Lavante and Officer Scaglione walked into Wal-Mart like, as Lavante put it in a Facebook post, “we were best friends.” Officer Scaglione bought Lavante a car seat — after asking his daughter what color and design she wanted. (Pink, incidentally.)
Lavante was so surprised that he didn’t think about asking the officer his name, or even looking at his name tag. He posted on Facebook, then spent some time on the phone with the police department trying to track down the officer who had been so kind to him. And, eventually, he found Officer Scaglione. The Westland Police Department arranged a meeting with, of course, cameras present, though of course Officer Scaglione dismissed all the attention by saying he was just doing his job, and that giving Lavante a ticket would have just made his situation worse. Of his gift, he simply said, “You have a daughter and she is a Number 1 priority and you deserve it.”
Lavante’s takeaway from his experience is a bit cliched, perhaps, but still true: “never judge a book by its cover.”
Either Lavante or Officer Scaglione could have. Either could have taken a glance at the situation and assumed they knew all they needed to know about each other: a young black man who didn’t care about his daughter, a racist white cop who was never going to give a black man in a white suburb the benefit of the doubt. But by suspending judgement, the two of them (Lavante chose to cooperate, remember) wrote a story that judging by appearances could never have written.
Honestly, we judge by appearances so often we might not even know when we’re doing it. It’s how we process information — we relate it to something we already know. So you see a guy with a sign at an intersection, and you immediately think you know his story. Someone hurts me, and I immediately assume I know why. We see someone dressed well at church, and someone dressed shabbily, and we make all kinds of assumptions about success and morality and even faith.
Judging by appearances is easier, of course. It’s faster than gathering the information needed to make a right judgment. It’s the path of least resistance because it feeds our own preconceptions and prejudices.
But, of course, judging by appearances usually gets us on the wrong side. Judging by appearances has led us, hasn’t it, to taking the side of the tyrant against the tyrannized? It’s caused us to vilify virtue while glorifying evil and corruption. Judging by appearances has given the well-mannered, the eloquent, the educated, the charming a pass to do whatever they like, without accountability. It’s allowed free reign to those who look, speak, act, and dress like the majority.
Judging by appearances lets us dismiss uncritically any thought, any idea, any person that doesn’t line up with our experiences, assumptions, and prejudices. When we judge by appearances, the mistakes of those we dislike become character flaws while the deep-seated immorality of those we approve can be overlooked or written off.
We can, apparently, even mistake the work of God for the work of the Devil. And vice-versa, probably.
And so Jesus reminds us not to judge by appearances. In other places, he says not to judge at all. I tend to think in both places he means pretty much the same thing. Judging by appearances can be a handy way to dismiss someone, to deny him or her personhood, to in effect objectify them as a caricature of a human being. Though there are times when perhaps we must make a judgment about a person’s words, or actions — such as the judgment about Jesus’ words or actions that he invited — we’re never to let knee-jerk surface judgments cloud the picture.
The only way to avoid this, probably, is the way that Lavante Dell and Joshua Scaglione took. We have to be willing to get to know one another. We have to be willing to push past the surface impressions to the people underneath. We have to learn each others’ stories, become comfortable with the fact that all of us are big collections of mixed motives, past mistakes and hopes for the future, successes and failures, victories and defeats. When we do, we can start to see God’s fingerprints on one another, and to believe that every one of us is loved by him and depends entirely on him.
Then, maybe, we’ll start to treat each other with the generosity, grace, and love that Jesus was known for. And maybe we’ll be able to see the hypocrisy, selfishness, and violence around us — and in us — for what it is, too. The way that he did.


Maybe there’s someone right now who you’re judging by appearances, some situation that you haven’t looked at 6 inches below the surface. If so, you’re in no position to make a right judgment. Give judgment to the Lord, and instead get to know that person. Move toward her or him in a spirit of love and grace. And just see if, like Lavante and Officer Scaglione, you might find a friend.