Submit to one another out of reverence for Christ.
Wives, (submit yourselves) to your own husbands as you do to the Lord…
Husbands, love your wives, just as Christ loved the church and gave himself up for her…
-Ephesians 5:21-22, 25 (NIV)

Some things, the longer you do them the less you realize you know about them.
One of those things is marriage. You might have discovered this, or you might not have yet, but being married for a while basically only qualifies you as an expert on how to mess up a marriage. I know whereof I speak on this. As of last Wednesday, I’ve been married for 25 years.
I know what you’re thinking, and, yes, I was only 12 when I got married.
That doesn’t make me an expert in anything more than messing up, though. Seriously, I deserve no credit for having made it to my Silver Anniversary. That’s all Laura. I lucked out and married well above myself, to the most patient and loving, kindest, most understanding, most beautiful woman I know. Also, despite being among the smartest people I know, she said yes when I proposed. (So maybe she isn’t perfect — her taste in men may leave something to be desired.) You know that couple you see and think to yourself, “What is she doing with him?” Yeah, that’s us. 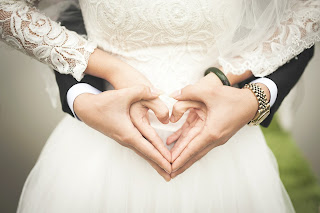 Thing is, she makes me want to be better. Fifteen years ago, on our tenth anniversary, I found myself asking her how I could be a better husband. (I don’t necessarily recommend doing that too often…) She kind of rolled her eyes and sighed: “Would you just take out the trash without me asking you too?” It dawned on me then that, yes, I could. It also occurred to me that I wanted to, because she wanted me to.
There’s some advice for you, children: marry someone who makes you want to be a better person, someone who makes you want to elevate your aspirations and improve your character. By all means,  marry someone who loves you for who you are, but never marry someone who will let you be content to never grow, stretch, or learn. A few years down the road, neither of you will be happy with you.
Like most topics in our world, discussion of marriage in our culture usually turns in the direction of self-actualization. That is, in our way of thinking marriage is valuable and helpful only to the degree that it helps me be the person I want to be, When it outlives that utilitarian function its value disappears. In short, marriage is about me, and if I outgrow my spouse then I should get out, or risk being stunted as well.
The Bible, though, includes marriage as one of the relationships governed by the mandate to submit to one another out of reverence for Christ. In other words, marriage isn’t about me. To marry someone isn’t to lock them in to a relationship in which my fulfillment, comfort, and amusement is the highest good. Instead, when I marry someone I choose to subvert what’s good for me.  I choose, instead, to put the good of my spouse ahead of my own good.
When Paul told the wives of his day to submit to their husbands, it wouldn’t have exactly been big news. Most wives in Paul’s time and place wouldn’t have had much choice in the matter of submitting. What’s news is why: they were to submit, not because their husbands or their society said so, but because of Jesus. The Lord who is head over the church asks them to. The rule for followers of Jesus is submit, like he did, and though wives were to be regarded as in no way inferior to their husbands, they were to submit to them as an expression of their submission to Christ.
It’s a text that gives us problems today, because we live in a different world. We read into that text things that Paul wouldn’t have intended because we don’t like that word submit. We hear him say, “obey all the outdated expectations of wives being home with the kids and in the kitchen.” We hear him say, “Put up with abuse and mistreatment.”
Again, telling wives in first-century Greco-Roman society to submit would have been as non-controversial as it is controversial in our day. The controversial thing is that he says the rule for all Jesus-followers in all relationships — including marriage — is submission to one another. Putting one another’s good above our own. We do this because of our reverence for Jesus, who has always put our good ahead of his own.
The truly shocking thing is that Paul tells husbands that they, too, are to submit to their wives, to love them as Christ loved the church — by giving themselves for their wives, in imitation of him. That’s the command that would have raised eyebrows.
I think I can honestly say I have never, ever regretted a time when I’ve put Laura ahead of myself, looked out for her interests above my own. That isn’t to say it’s always easy, or that I’ve always wanted to. But I’ve never looked back with regret when I’ve done it.
I’ve plenty of times regretted putting myself first.
So the only advice I have after 25 years isn’t my advice at all. It’s Paul’s: submit to one another out of reverence for Christ. Don’t read that as a demand that you stay in an abusive marriage and just try harder. Don’t think it means that your spouse has no responsibilities and shouldn’t have to answer for bad behavior. One-way submission is dangerous and abusive. But in a marriage where both spouses are submitting to one another our of reverence for Christ, there’s safety. There’s joy. There’s intimacy.


Thanks, honey, for twenty-five wonderful years. I’ll try to pick up my end over the next twenty-five!