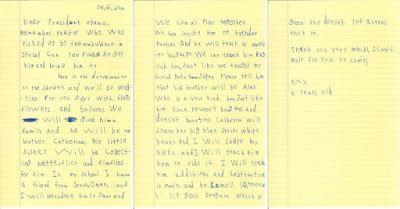 No matter who you are, what your politics are, the sight of a suffering child goes to your heart, doesn’t it? It appeals to our instincts to protect children from suffering, pain, grief, the loss of innocence. And so, if you saw the photo of pitiful little 5-year-old Omran Daqneesh, sitting in an ambulance shell-shocked and covered head to toe in dust after bombs reduced the Aleppo neighborhood of Qaterji to rubble, your heart probably broke. Doesn’t matter what you think should be done about the civil war in Syria and its refugees, if anything. To he human is to grieve over horror like this.
A boy in New York named Alex saw Omran’s photo, and he decided to do something about it. He sat down and wrote a letter to President Obama. Here’s the text:

Dear President Obama,     Remember the boy who was picked up by the ambulance in Syria? Can you please go get him and bring him to [my home]? Park in the driveway or on the street and we will be waiting for you guys with flags, flowers, and balloons. We will give him a family and he will be our brother. Catherine, my little sister, will be collecting butterflies and fireflies for him. In my school, I have a friend from Syria, Omar, and I will introduce him to Omar. We can all play together. We can invite him to birthday parties and he will teach us another language. We can teach him English too, just like my friend Aoto from Japan.     Please tell him that his brother will be Alex who is a very kind boy, just like him. Since he won't bring toys and doesn't have toys Catherine will share her big blue stripy white bunny. And I will share my bike and I will teach him how to ride it. I will teach him additions and subtractions in math. And he [can] smell Catherine's lip gloss penguin which is green. She doesn't let anyone touch it.     Thank you very much! I can't wait for you to come!Alex

There’s a video of Alex reading his letter to the President, just in case you aren’t teary-eyed enough already.
Look, there are reasons why children don’t run the world. The fact is, they have a lot to learn. Sadly, though, a lot of what they learn (from us, the grown-ups) is what they can’t do, what won’t work. They learn that refugee crises aren’t solved just by people opening their hearts and being generous. They learn that just sharing and learning from each other won’t always bring people together. They learn that some people are just different from them, and that people can’t cross borders just like that, and that Americans need to take care of Americans first. They learn…
Remind me again what kids like Alex need to learn from us?
Children, you see, are used to receiving. They can be generous because they know that what they have comes from somewhere beyond them, from moms and dads who can always give them more to replace what they’ve given away. Children who are loved and cared for aren’t insecure about that. (Even if they sometimes have to be reminded to share!)
That’s why Jesus said that God’s Kingdom is for people like children. That’s why he holds up children as the ideal subjects of the Kingdom. “Anyone who will not receive the kingdom of God like a little child will never enter it,” he once said. Receive, because the life God wants to share with us doesn’t depend on how good I am. He shares it because he’s good and generous and loving.
So we need to change and become like little children. In that specific way, children have it right. Of course, Alex doesn’t know that little Omran’s fate will be determined by a host of factors beyond his control. Of course the issue of Syria and its refugees is a complicated one. But what we can learn from Alex is that, complicated or not, we’re always at our best when we’re so secure in the generosity and grace of our Father that we generously include others in that circle of his grace and compassion.
Alex didn’t sit down and figure out how his family could take on another child. He just assumed that there was so much love and and generosity in his family there would plenty to go around. He shared freely because he had received freely. He has a bike, and school friends, and a family to share. He didn’t work to get those things. He doesn’t have to earn them, or even deserve them. They were just given to him. He has no doubt that there is more where that came from. So why wouldn’t he share?
Why indeed? See, we adults think in terms of going out and getting, of earning what we have. I worked hard for what I have, after all. If you don’t have as much, then the obvious conclusion is that you didn’t work as hard as me. You and I are in competition for a finite amount of stuff, and so, like Jesus’ original followers, we tend to argue about who is greatest.
But Jesus turns the order we think is established on its head. You’re great, finally, when you’re like this child, receiving the blessings God gives. Not figuring out how to get more of what I think I want, not scheming to make the world run according to my plans, not trying to out-hustle everyone around you — receiving what God wants to generously give, the love and grace to which the life and death and resurrection of Jesus testifies.


Then there’ll be room in your heart for those who are most in need. And you won’t think twice about opening your heart and inviting them in.