My brothers and sisters, believers in our glorious Lord Jesus Christ must not show favoritism. Suppose a man comes into your meeting wearing a gold ring and fine clothes, and a poor man in filthy old clothes also comes in.  If you show special attention to the man wearing fine clothes and say, “Here’s a good seat for you,” but say to the poor man, “You stand there” or “Sit on the floor by my feet,”  have you not discriminated among yourselves and become judges with evil thoughts?
Listen, my dear brothers and sisters: Has not God chosen those who are poor in the eyes of the world to be rich in faith and to inherit the kingdom he promised those who love him?
-James 2:1-5 (NIV) 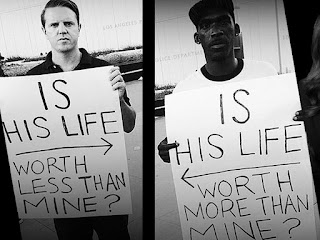 Colin Kaepernick, an NFL quarterback, refuses to stand for the National Anthem before games. “I’m not going to stand up to show pride in a flag for a country that oppresses black people and people of color,” he explains. He gets booed for expressing himself in this way.
The Black Lives Matter movement uses marches and organized protests to call attention to incidents involving black people killed, mostly by police, in Ferguson, MO, New York, Baltimore, Charleston, and Chicago, among other places. In response to the movement and their hashtag, other movements grow up around #AllLivesMatter and #BlueLivesMatter.
The color of a person’s skin — and, more precisely, the very different ways people of different skin colors often see the the world — still gives us trouble. Skin color, in America and in much of the world, can still keep us from communicating, understanding, and relating.
But it isn’t just about lack of communication. What Colin Kaepernick, what Black Lives Matter, what every person who has ever put themselves at risk to advance the cause of civil rights for all people have understood is that racism is alive and well. It is perhaps, in most cases, below the surface now. Instead of being codified by law it is entrenched in many of our power structures, in our assumptions and habits, and in the ways whites enjoy an inherent advantage in the world over blacks or Hispanics or other minorities.
Here’s something to consider: “When you’re accustomed to privilege, equality feels like oppression.”
That sentiment explains white anger toward Affirmative Action, or why the All Lives Matter movement popped up, predictably, in the wake of Black Lives Matter. It’s why, in comment sections all across the internet, white people accuse anyone who dares to call for an end to the entrenched racism in our society of “reverse racism.” When you’re used to the advantages that the color of your skin gives you, it’s hard to listen to anyone suggest that those advantages should be taken away, or given equally to others.
One of the core truths about God that the church has always held is that he “does not show favoritism but accepts from every nation the one who fears him and does what is right.” It’s easy for white people to read that text as saying that God wants everyone to be treated equally, all the time. I suppose, in a perfect world, that’s exactly what would happen. But this is not a perfect world. So fairness and justice might demand that some who have been cheated — by accident of birth, skin pigment, geography, and so on — of the fair chance that should have been theirs should expect the historically privileged to look particularly after their interests.
The Bible is full of demands that God’s people look after the widows and orphans. God’s expectation that those who have material things should show special regard for those who don’t is one of the clearest, most unambiguous themes in Scripture. So there you have it: God, who shows no favoritism, still looks with special favor on those who are marginalized and oppressed by society.
And, oh, yes: he expects that his people will as well.
Sometimes that will mean, as in the hypothetical situation from James, that we not show special attention to those who don’t need it. The practice of flattering and currying favor from those already in power and who already enjoy privilege shouldn’t ever be evident among people who wear the name of Jesus. It’s ugly and unworthy of the One who spent his time with the sick and broken and blind and poor and metaphorically thumbed his nose at those in the seats of honor.
It means listening when those in our world who are treated unfairly because of the color of their skin, or the number of their chromosomes, or their country of origin speak out against the treatment they’ve received. It means giving them the respect of admitting that they may see some things we don’t see, that they are acquainted with some ugliness in the world that the rest of us don’t know. That they’re not trying to get something for nothing, but only want the same chances that we enjoy. Not to have their rights trampled because of their skin color. To work at a job for a wage that will give their families food and shelter. To get an education that will better their situation. To live in a safe neighborhood.
It means recognizing that sometimes showing God’s favor for those who are marginalized will mean acknowledging our own privilege. I know, you don’t feel like anyone ever gave you anything. If you’re educated, financially secure, and living in a safe place it has to do with how hard you’ve worked. I don’t deny that. But someone with a different skin color, or who comes from a different place, or was born in different circumstances could potentially work twice as hard as you and do half as well. And where the reason for that is injustice, God demands his people to be willing to try to set right what is wrong.
In the kingdom of God, there should be no favoritism. Does your church have in leadership positions some who have been historically denied those positions? Do you serve the poor and uneducated with respect, dignity, and compassion? Do you lend your voice and assistance to those who have no voice or power? Do the biggest givers at your church have the loudest voice? Or do you “clothe with greater honor” those members who are “less honorable”?
The church has not always been on the right side in the battles in our country over civil rights.