The one who has an ear had better hear what the Spirit says to the churches.
-Revelation 2:7 (NET) 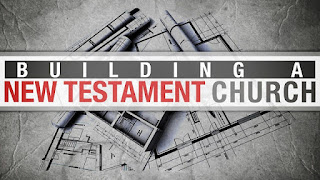 I grew up hearing a lot about the “New Testament Church.” The group of believers among whom I was raised stressed the importance of restoring the church described in the New Testament. We especially focused on a few particular characteristics that we supposed we saw in the Bible, and noted the absence of those characteristics among the other denominations, flavors, and brands of Christianity that dotted the landscape of Chattanooga, Tennessee.
This was in the 1970s and 80s, before the megachurch movement eroded and smoothed out denominational loyalty and distinctiveness. Our focus was on what made us different from those other churches — and, not surprisingly, more biblical. While “they” had been afflicted with centuries of tradition, “we” were simply an incarnation of the New Testament Church. You could open your Bibles and find us, we liked to say.
Please understand: I came to know Jesus among these people. I have no doubt of their love for the Lord. The faith of many of those men and women trivializes mine. Many of them have gone on to be with the Lord, and I don’t mean to insult them or demean them. This is only to point out how our understanding of what makes a church faithful, biblical, or whatever adjective you want to use can be subject to change.
Mostly, we were well-meaning. But, if you listened to us get descriptive about what made a church a New Testament Church, you might walk away thinking that the New Testament Church was all about baptism (adults, by immersion, for the remission of sins), worship music (vocal and congregational only — no instruments and no choir), the frequency of the Lord’s Supper (every Sunday), church organization (local elders, with no higher organization), and the distinction between clergy and laity (no Pastors, Reverends, Fathers, and so forth, and no vestments. We could call our Preacher or Minister “Brother.”). Roughly, that order corresponds to the emphasis placed on them. And, to be honest, any sermon or class series I ever heard on the New Testament Church would begin and end with that list.
That is, until I was in my early 20s, studying to be a minister at one of “our” universities.
Jim Woodroof was a former missionary and minister in Churches of Christ who had come to teach at the school I was attending. He taught a class called, yep, The New Testament Church. I imagine it was intended to be all about the characteristics I mentioned a couple of paragraphs earlier. But Jim did not teach it that way.
The most interesting (and, in hindsight, obvious) difference in Jim’s class was that he started his discussion of The New Testament Church with Jesus. (The emphases I had heard growing up came mostly  from Paul.) There was a historic component to the class, so we learned some things about how other believers who had come before us had felt the need to restore The New Testament Church, but had maybe emphasized different points. We learned how, often, we read the Bible through lenses colored by our own places, times, and situations. And we were reminded how Jesus exposed as hypocrites religious people who thought they were right and everyone else was wrong. It was a formative semester for me.
I thought of my own history with The New Testament Church this week as I read Scot McKnight’s blog post about a new book by James Thompson called The Church According to Paul. McKnight’s post includes a list from the book of ten observations about Paul’s churches.
Some of the items on the list jibe with the lists I heard growing up. Number one, for example, is that Paul “nowhere mentions administrative institutions that coordinate or have authority over the activities of the local community.” We would have agreed with Thompson’s #7 that the church is not “a theater for entertaining attendees; rather, it is a body in which all participate.” I’m smiling even now at how irrationally happy it makes me to see the concerns of my childhood church reflected in this list. Others — like number 8: “the competition between the churches and the struggle for market share in metropolitan areas undermines the united witness of the churches” — reflect concerns about the same things expressed in different ways. (Our response to the “competition” and “struggle for market share” among churches would have been to position ourselves as the only one who were getting this New Testament Church thing really right.)
Other items on Thompson’s list, sadly, don’t correspond to much of anything I heard growing up. Of particular note, his #5, where the local church is to be “a place for the care of the most vulnerable in the society.” That’s not to say we didn’t do that, but we wouldn’t, I think, have spoken of it as integral to the identity of The New Testament Church. And then there’s his #9: “The ecclesial vision of Paul challenges the churches to engage in ecumenical cooperation in the context of the diversity of cultures.” Yeah, that one we didn’t even much try to do.
All this to say, I guess, that this business of being the New Testament Church is about a lot more than just copying a few practices that we think we see in Scripture. I’m enough of a product of my heritage that I still think it’s a worthy goal. But I’m also enough of a product of my heritage that I sometimes say, “Wait, which New Testament Church do you want to restore?” Because, as I recall, not one of them was perfect. In fact, the reason we know anything about them today is because someone wrote them a letter telling them some things they needed to know in order to be more faithful to their Lord.


So maybe that is the mark of a New Testament Church: that we can listen to our Lord when he tells us we need to change. That, as painful as it may be, we can face up to our failings, repent of our sins, and move forward as his people again. That we don’t give in to the arrogance of thinking we have arrived, but know that the quickening pulse of the Holy Spirit within us and among us will always break down walls, heal the broken, lift up the defeated, and bring down the proud. And that to be the church our Lord intends for us to be is to be the people among whom He is free to move.