For he himself is our peace, who has made the two groups one and has destroyed the barrier, the dividing wall of hostility, by setting aside in his flesh the law with its commands and regulations. His purpose was to create in himself one new humanity out of the two, thus making peace, and in one body to reconcile both of them to God through the cross, by which he put to death their hostility. He came and preached peace to you who were far away and peace to those who were near. For through him we both have access to the Father by one Spirit.
-Ephesians 2:14-18 (NIV) 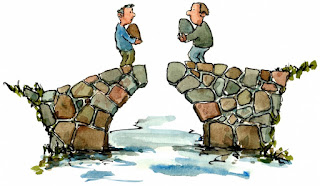 
Ignore those who would divide, and you’ll have a lot more time and energy to devote to the One who brings us all together.
Posted by Patrick Odum at 2:56 PM