How Things Should Be

The Spirit of the Lord is on me,
because he has anointed me
to proclaim good news to the poor.
He has sent me to proclaim freedom for the prisoners
and recovery of sight for the blind,
to set the oppressed free,
to proclaim the year of the Lord’s favor.”
-Luke 4:18-19 (NIV) 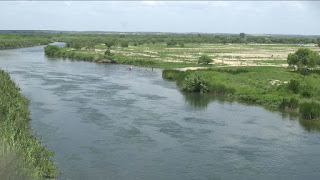 Óscar Alberto Martínez Ramírez was just 26 when he died. His daughter, Valeria, was just a month shy of 2 years old when she died with her arm around his neck. Their bodies were found last week in the shallow water and undergrowth along the bank of the Rio Grande, near Matamoros, Mexico. There was nothing between them and the United States but the river. It might as well have been a wall.
Óscar left San Martin, El Salvador, in April, along with Valeria and his wife, Tania. They made it to Matamoros about a week ago, where they intended to apply for asylum in the US. That’s something to note about their case: they intended to enter the US legally. But they heard that Mexico would crack down on migrants in response to threats of trade tariffs from the States. They found that with the sheer number of asylum-seekers and the reductions in the number of migrants the US allows to apply for asylum each day, it could take weeks to even begin the process. That’s when they decided to cross the river and figure out what to do from there.
Witnesses say Óscar took Valeria across while Tania waited on the Mexico side. He got Valeria safely to the US side, then went back for his wife. Valeria, unfortunately, went into the river after him. He went back to get her, and the current took them both.
Isabel Turcios, a nun who directs the Casa del Migrante shelter in Piedras Negras, has seen it many times. She says that those who work for her shelter warn migrants not to try their luck in the Rio Grande, but often their warnings aren’t heeded. “People get desperate and cannot keep waiting. They just want to cross.”
“They always tell me that if God wants them to make it then somehow they will make it. It’s not how things should be.”
No. No, it isn’t. I think surely everyone can understand that, can’t we? I mean, we’re told that there are rapists, murderers, and terrorists massing at our border, just waiting to get in and prey on us, the good people who live on the right side of the border. Strange, then, that what we keep hearing about are kids kept without their parents in abysmal conditions while the government — the one that’s of the people, for the people, and, oh yeah, by the people — wrangles in court over the definition of “safe and sanitary.” Our political leaders keep telling us about the dire consequences of migration to “our way of life” (Whose way? Defined by whom?) Strange that they can’t offer statistics for any of those dire consequences. Politicians win elections playing to our fear of an army of migrants coming across the border to invade our country.
Strange that all we keep pulling out of the water are the bodies of toddlers holding on to their daddies.
Parents shouldn’t have to wade into a raging river to provide for and protect their children. But they will, you know they will if they’re desperate enough, because so would you. Sister Isabel is right, it’s not how things should be. But it’s how things are.
As Christians, though, one thing we should be quite clear on is the difference, the Rio Grande-sized divide,  in our world between how things should be and how they are. We’ve always held that distinction in our minds. Our Scriptures and songs proclaim it. In fact, the central story of our faith is all about that wide discrepancy between things as they are and things as they should be.
Sometimes we’ve dealt with that discrepancy by pointing to the coming of Christ as the time when things will be made right, when we’ll no longer have any use for that phrase, “It’s not how things should be.” There’s truth and hope in that, of course. But, to be honest, we’ve also sometimes used that hope as a way to stifle the objections of those who are hurt most by things not being as they should be. Some of us use that hope, in fact, to say that our faith has no place for those aspirations that things should be better. We should just buckle down, have faith, and not make trouble. “Our hope is not in this world,” after all.
The thing you might notice is that the Christians who say this with the most volume and conviction are often those who seem to have the most invested in the way things are, and who fear they’ll lose the most from how things should be.
Bruce Springsteen’s song of a few years ago, Matamoros Banks, seems prescient. Unfortunately, it’s just that what he was singing about back then hasn’t changed:

For two days the river keeps you down
Then you rise to the light without a sound…
Your clothes give way to the current and river stone
'Till every trace of who you ever were is gone
And the things of the earth they make their claim
That the things of heaven may do the same.

But, really, did the one we follow think that the things of heaven and the things of earth should be so far apart? Did he teach us that it doesn’t matter if the inequities of where a person is born and how much money they have takes away every trace of who they ever were? Didn’t he teach us to pray, “Your Kingdom come/ Your will be done on earth as it is in heaven”?
Jesus came proclaiming “the year of the Lord’s favor;” that the blind could see, the oppressed could have relief, prisoners could go free, and that there was actually good news for the poor. We believe that time will be culminated and brought to completion when he returns, but we believe (because he believed) that it started when he came the first time. When he healed someone, when he raised the dead, when he showed love and compassion for the weakest in his world, when he died for our sins and rose for our redemption, he was proclaiming that the year of the Lord’s favor had commenced.
How could those of us who follow him not do the same?
I believe there is still hope in the gospel of Christ for Oscar and little Valeria. I believe a day is coming when they will wake to security, peace, and joy that they never found in this life. I hope I’ll get to meet them then, if only to see them smiling and laughing and enjoying being with each other and with Tania. But that hope doesn’t make it OK that they died, nor that some of us who wear Jesus’ name could shrug it off, or object that it’s just the way things are.
Protest. Write decision-makers. Vote, or don’t vote. Those are the tools of a democracy. But we depend on something greater than that. Pray. Add words of hope, gospel words, to the debate. Proclaim the year of the Lord’s favor, then show our world what that looks like. It looks like love, grace, acceptance, compassion.