A Revolution of Washing Feet

When he had finished washing their feet, he put on his clothes and returned to his place. “Do you understand what I have done for you?” he asked them. “You call me ‘Teacher’ and ‘Lord,’ and rightly so, for that is what I am. Now that I, your Lord and Teacher, have washed your feet, you also should wash one another’s feet. I have set you an example that you should do as I have done for you. Very truly I tell you, no servant is greater than his master, nor is a messenger greater than the one who sent him. Now that you know these things, you will be blessed if you do them.

Several years ago — nearly twenty now, I guess — I saw something at a ministry conference here in Chicago that’s 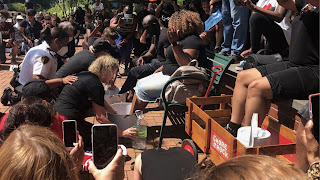 stuck with me all this time. I was at a seminar or workshop or something on racial issues, and at the end of the presentation, several black church leaders came up onto the stage and were seated. Several white church leaders then came to the stage with basins of water. Each knelt in front of one of the black church leaders and washed their feet. If I remember correctly, someone read John’s account of Jesus washing his disciples’ feet aloud.

It was, to me, a light bulb moment that I probably should have had years before that: racism cuts against Jesus’ example of loving service. If we’re his servants, then we can’t expect to avoid the kinds of sacrificial love that our Master literally embodied. We should do for each other what Christ has done for us, and having skin of a different color doesn’t exempt us from that requirement.

But I vividly remember the conversation around me after it was all over. Far from being touched by it, some in the audience were furious. They felt that they were being made to feel guilty for racism that went on long before them, for being white, even. But their anger felt all out of proportion. It was just a simple ceremony, one modeled by Jesus. I wondered what was going on under the surface that called forth that level of hostility.

I thought about that because of a story I saw on social media this week. During a demonstration in North Carolina, a group of white civilians and police officers got together to wash the feet of black religious leaders. They all joined in a prayer of repentance for racial injustice. (This is biblical, by the way — you might remember that Nehemiah prayed to God in repentance for national sin that was going on long before his time. It isn't about taking sole responsibility for that sin. It’s about dragging it out into the open and announcing before God the intention for change.)

Anyway — like at the conference 20 years ago, I was impressed by the simple and profound display of love, compassion, and humility that demonstration signified.

Also like at the conference — some people didn’t see it that way.

I saw the story because a social media acquaintance posted it with this caption: “I'm gonna tell you right now...I won't wash the feet of anyone... I don't care what color you are or what you think I owe you. This is just disgusting.” The acquaintance doesn’t really claim to be a Christian, so I can’t really hold that statement against him. If anything, I think he kind of gets it. Washing feet, in Jesus’ day or in ours, is not the way to promote your brand or gain influence. It’s the act of a servant. It was a privilege the wealthy and influential enjoyed at the expense of the poor and powerless. For someone in a position of privilege to wash the feet of someone of lower status was to overturn class distinctions. The disciples likely had a very similar view — that’s why Peter is so upset about Jesus doing it. It’s upsetting in our world for some of the same reasons.

The other responses to the post were, if anything, even more telling: “Insane,” one person wrote. There were some that were equally (and literally) dismissive. And then this one: “…(I)t should be the blacks who wash the feet of the cops since they are the ones protecting them from each other,” which is so blatantly racist that it makes the fact that he was also complaining about the demonstrators asking forgiveness for something they didn’t do just drip with irony.

So judging by the reaction, I think the demonstration was a very effective symbol of what it will take to challenge the settled racism that is still so much a part of our world.

If you’re a follower of Jesus, then make no mistake; Jesus expects from you a radical love that flouts convention, overturns social hierarchy, and that will sometimes make people downright angry. Washing the disciples’ feet was just a shorthand for what his whole life had been about. At the cross, he knelt and washed the undeserving. He ate with the sinners and touched the lepers and in doing so insulted the prejudices of the pious. “I have set you an example that you should do as I have done for you.” When we see racism in action, we can’t deflect responsibility by saying, “but I’m not racist.” Neither are we allowed to tut-tut from the sidelines. His example calls us to be servants instead of looking for another way to be served, and to serve in ways that might make others turn their noses up.

If you follow Jesus in this way, it will expose the prejudices in your own heart. (Don’t look so shocked and insulted; we all have them.) If you move into the world in the posture of a servant, sooner or later you’ll hesitate because you’ll be asked to serve someone that you don’t think highly of. You’ll have to ask yourself why serving them seems so especially repulsive; what are your perceptions, where do they come from, and how does following the example of Jesus in serving help to dispose of them?

No, you didn’t create the racism in our world. But you don’t get credit for that. You don’t get credit, either,  for the ways in which you’ve personally avoided wallowing in its evil. You’re part of a world in which it’s entangled in almost every subject, every institution, every topic of conversation. Go into that world as a servant, determined not to look for privileges and credit, but to extend love, compassion, and kindness.

And, yes, there are times when that will look insane to the people around you, and they’ll say so. It happened to Jesus; one of the disciples whose feet he washed that night left the table and betrayed him. You’ll offend their sense of order, or your example will make them see a little too clearly what’s in their own hearts or disrupt the tidy sense they have of themselves as somehow superior. That’s OK, though, servants don’t answer to anyone but their Lord. Continue to go about your business, quietly and consistently. Your job isn’t to win arguments. It’s to serve like Jesus served. That’s awfully tough to argue with for very long.

In fact, you might just find that the Lord is calling you to serve your toughest critics. If so, do it joyfully. Do it the best way you can, as you imagine Jesus would if he were here.

Serving like Jesus won’t make racism go away overnight. But it will begin to undermine it, as those of us who have enjoyed a privileged position in our world exchange that position for servants’ work.

Jesus promises we’ll enjoy a blessing when we do what we know we should.

Maybe that blessing will be a world in which no one is excluded because of the color of their skin.