"In Prayer at the Place of the World’s Pain"

On the evening of that first day of the week, when the disciples were together, with the doors locked for fear of the Jewish leaders, Jesus came and stood among them and said, “Peace  be with you!” After he said this, he showed them his hands and side. The disciples were overjoyed when they saw the Lord.

Again Jesus said, “Peace be with you! As the Father has sent me, I am sending you.” And with that he breathed on them and said, “Receive the Holy Spirit.”

At my alma mater, Harding University, the largest building on campus (I guess?) is the Benson Auditorium. George Benson was a longtime President of the university, responsible for much of the growth of the school in the middle of the twentieth century. Before that, he was a missionary in China. For much of his tenure at Harding, though, Benson resisted efforts to desegregate the school. Disregarding student and faculty pressure to integrate (to be sure, there would have been some pressure from the same directions to hold to the status quo), he refused to admit black students until 1963, when the impending Civil Rights Act would have required Harding to admit blacks or lose federal funds.

Benson was well-known, in those days, for a line he often delivered when discussing integration: “The blackbirds and bluebirds, the blue jays and mockingbirds, they don’t mix and mingle together, young people!”

Earlier this week I received a link to a petition for taking Benson’s name off the auditorium. 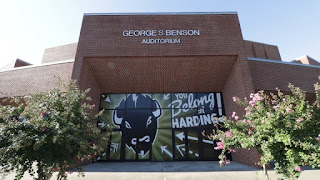 I’ve expected that for a while now, actually. Benson did good in the world. But he’s also a cautionary story that we all have feet of clay, that there are ways in which we all need to learn and grow, and that none of us get out this world without wreaking some havoc. (Not to mention that maybe we should tap the brakes on putting peoples' names on stuff.) Whether or not I signed the petition isn’t material here, but I understand why it was circulated. Removing Benson’s name wouldn’t negate the good he did for Harding, in the world, and in God’s kingdom. And to have it in big bold letters on the side of a building where students of all races are required to attend daily chapel is probably just too painful and too lacking in compassion for those who were refused entry, or who would have been under his presidency, just because of the color of their skin.

Recently, I’ve heard Christians react in anger that their pancake syrup is going to have a different name. Maybe that’s because it’s just easier and more comfortable for us to get angry about perceived slights than actual injustice and inhumanity. Maybe that’s why we get hung up on the tearing down of monuments and the renaming of buildings while essentially shrugging off the institutional mistreatment of human beings as “history.” But history isn’t neutral, and how we affirm or challenge history today says more than we’d like to admit, maybe, about who we are and how the history we’re writing will be viewed by our children and grandchildren.

Harding’s current president has responded to the petition to rename the Benson Auditorium by saying, in part, “It is important, as we wrestle with the difficult issues of our time, that we not forget ‘weightier matters’  like justice, mercy, and faithfulness.” He seems to equate the question of what name will be on the Benson with the small issues of rule-keeping that Jesus mocked the Pharisees for. He doesn’t seem to recognize that what name students going to worship see on the building has everything to do with justice, mercy, and faithfulness.

But I think it’s easy for all of us to shrug and say, “Who really cares what’s written on the building?”or “What does pancake syrup have to do with racism?” when what we mean is “Who are you to make me feel uncomfortable?”

That, of course, is the wrong question.

This week I also got to be part of a Zoom meeting with N.T. Wright.

You probably don’t know Wright, so I’ll put this in a way you might get. If you’re a Cubs fan, imagine you get to sit in on a Zoom meeting with Ernie Banks. If you like baking, imagine those people from The Great British Baking Show. Wright is probably the best-known and most-read New Testament scholar in the world. I’ve struggled through most of his books, even the big thick ones. It was the coolest Zoom meeting I’ve ever been in, and I’ve been in one with Barack Obama.

Wright was addressing a group of ministers and elders from Churches of Christ on the theology of the pandemic and racial tensions in our world. He started by saying (much more eloquently than I will) that the church is filled with the Holy Spirit so that we can be a kind of a case study in what life as God intends it should look like. That being the case, the church should have been a role model and an example of racial justice all along, not playing catch-up with the rest of the world out of shame.

And then he went on to say, in reference both to matters of race and the fear and loss brought on by the pandemic: The church’s mission is to “be in prayer in the place of the world’s pain.”

Instead of that, sometimes we try to defend buildings and statues and pancake syrup.

Or we pass along conspiracy theories about why businesses are closed and we have to wear masks.

Or we think we have to defend God or win arguments.

I love that story in John where the risen Jesus finds his disciples hiding behind locked doors out of fear. They’re terrified. Thomas is doubting. They’re sheltering in place trying to wait out uncertain times. And Jesus comes to them. He offers them peace. He sends them out to continue his work with the power of the Holy Spirit. He even condescends to their doubts.

Jesus comes when we’re afraid and doubting, hiding, trying to keep our heads down and our profiles low.

Like now, in this turmoil over racial injustice that should have been dealt with years ago.

He comes and he shows us his hands and his feet and his side. He reminds us that he’s the same Jesus who was crucified for our fear, our doubts, and for our unresolved sins.

And then he fills us with his Spirit and sends us out to do his work in the world.

So the last thing we should do is cope with the discomfort and fear we’re feeling by holding onto versions of the past that crowd out God’s work in the present. I think that’s part of our struggle; many of us aren’t used to living with this much fear and uncertainty. Feel it. Own it. Recognize it as part of existing in a broken world. (There are many voices that could teach us much about living with constant fear, aren’t there?)

But also recognize Jesus. See the wounds on his body that testify to his love for this world - and also that love and sacrifice go together. Receive his peace. Receive his Spirit.

Then go out into the world to do his work.

You likely won’t get a building named after you.

Maybe the legacy you’ll leave in our world will last even longer than that.