When God Gets A Hold of You...

I am obligated  both to Greeks and Non-Greeks, both to the wise and the foolish. That is why I am so eager to preach the gospel….

For I am not ashamed of the gospel,  because it is the power of God  that brings salvation to everyone who believes: first to the Jew, then to the Gentile. For in the gospel the righteousness of God is revealed — a righteousness that is by faith from first to last, just as it is written: “The righteous will live by faith.” 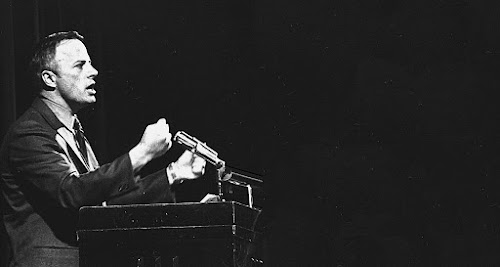 Photo Courtesy of The Christian Chronicle

Earlier this week, I got word that Jimmy Allen had died.

You might not know who that is. In the 60s and 70s, he was arguably the best-known evangelist among Churches of Christ. Allen traveled around the country holding evangelistic meetings — around 1400, by his estimate, resulting in about 10,000 baptisms. His style might not be very popular today — arguably his most famous sermon is called What Is Hell Like? — but the fire and brimstone he preached at his meetings was intended to give his audiences a chance to hear and respond to the Gospel of God’s love.

In his own words, Allen believed the Gospel “was too good for me to keep my mouth shut.” He meant that, too. He shared it in front of audiences of thousands, but he also shared it on airplanes, in restaurants, at his kids’ school. He even said that he regularly picked up hitchhikers just so he could talk to them about Jesus.  (Wonder if any of them asked to be let out of the car short of their destination?)

“Seems to me like this is what Christians are supposed to be doing,” he would say.

By the time I knew Jimmy Allen, it was as a Bible professor at Harding University, where he taught for about 40 years. Every one of those years, I guess, he taught the book of Romans. The joke at Harding was that Paul the apostle — who wrote the book — couldn’t manage better than a B+ in Allen’s Romans class. (I will neither confirm nor deny that I got an A.)

I didn’t know much about Dr. Allen’s background; I think most of us secretly believed he sprang fully-formed and preaching from his father’s forehead or something. I’ve since learned that he never knew his father, and that his mother was killed in an accident when he was still a boy. He grew up in rural Arkansas, cared for by his grandmother and working in the fields to earn a few cents. He didn’t know Christ until he came to school at what was then Harding College. Maybe his background made him that much more ready to hear the story of God’s unconditional love in Jesus. When he heard it, it changed him, and he never seemed to want anything more than to see it change others.

Allen emphasized God’s grace in that Romans class. For some of us, the idea that we’re saved because God is full of grace — and not because we get everything right — was, well, a revelation. I can remember him saying, passionately, “If you get a hold of Romans, God will get a hold of you.” It was obvious to anyone who heard him preach, or who took that Romans class with him, that God had gotten a hold of Jimmy Allen.

I guess that’s why he also said, often, “I would rather teach Romans than eat when I’m hungry.” He wanted God to get a hold of his students as well.

Despite his reputation as a fire-and-brimstone preacher, Allen was a person of great kindness and grace. I recall him saying at least once that he never believed anything bad that he heard about someone, and that if the person ever proved that it was true, he didn’t delight in it. That kind of spirit is in short supply in our world, and sometimes hard to find even in the church. But I believe it’s the way of Christ.

I was hyper-sensitive to traditionalism when I took Dr. Allen’s Romans class. I was young, thinking I knew it all and especially where the Old Guard was wrong. I probably thought Dr. Allen was one of the ultra-conservative Old Guard; wrongly, as it turned out. He sort of messed up my “Liberal/Conservative” map, and it finally dawned on me why when I heard him in class one day take down people who bragged about not having  changed any of their views on the Bible in twenty-five years. He called people who make that claim stagnant, and dared to say that they hadn’t spent much time in the Bible in that quarter century. In saying that, he was stepping on the toes of some of his colleagues. But it was nice to hear him say that it was to be desired that the Bible change our minds the longer we study it. “In teaching others, we are continually asking them to change from error to truth,” he said. “We should be willing to practice the same.” I’ve never forgotten that. My thinking about some things — maybe a lot of things — has changed in the years since I knew Dr. Allen. He probably wouldn’t have agreed with all the changes, and I’ve come to believe he was mistaken about a few things too. If anything, though, I appreciate the gospel that changed his life even more than I did back then. And maybe that’s the best way to evaluate changes in your views: Do they help you to better understand, appreciate, and internalize the wonderful story of Jesus?

That story was always, to Dr. Allen, about more than salvation from his sins. He understood that the gospel calls us to be colonists of the kingdom, instruments of God’s healing in the world. In the Sixties, when it was far from popular in the south to be committed to racial equality, Dr. Allen was publicly supportive of civil rights. He used his pulpit as one of the most well-known evangelists in Churches of Christ to bring the issue of racism to light. I imagine it cost him some meetings, but to him it wasn’t secondary to the good news of God’s grace. For him, it was obvious that if we’re all saved because of God’s favor toward us, then none of us are more than or less than any other person.

Jimmy Allen’s life reminds me of the obligation we have as believers, gospel-formed people, to preach that good news to all people. Sharing the gospel is not a good idea; it’s a responsibility. It’s what Christians are supposed to be doing. You won’t do it like I do. I don’t do it like Dr. Allen did. Jesus wants the gospel proclaimed in your voice, performed in your actions, and no one can do that better than you.

The gospel reveals God’s righteousness, Paul says. It shows us that, in spite of our unrighteousness, God is faithful from beginning to end. “While we were still sinners, Christ died for us,” he says. Through Christ, God demonstrated beyond a shadow of a doubt that he is righteous and can be trusted to act in love toward us, no matter what.

Dr. Allen’s obligation is finished. His duties are discharged. Many, many people heard of the faithfulness, righteousness, and love of God as seen in Jesus Christ. May we follow his example in never being ashamed of that good news. May we never discriminate, but proclaim it to all people, believing that it is the power of God for salvation. Our words. Our actions. But when they tell that story, they are filled with God’s power.

If God has gotten a hold of you, tell it.