When Racists Write Our Worship Songs

God has put the body together, giving greater honor to the parts that lacked it, so that there should be no division in the body, but that its parts should have equal concern for each other. If one part suffers, every part suffers with it; if one part is honored, every part rejoices with it. 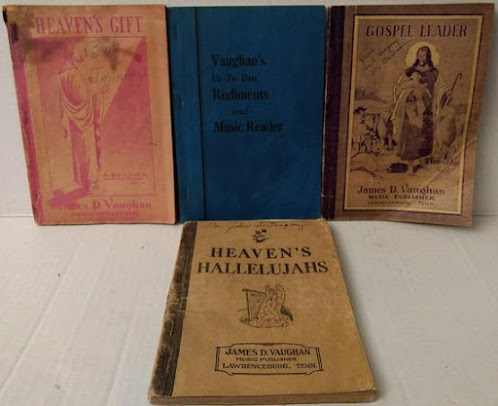 Rachel Martin has written a really interesting post for Oxford American called “Hoods in My Hymnal.” She writes about a Southern gospel music festival she attended last year in a little town in Tennessee, Lawrenceburg, whose claim to fame in the Southern gospel world was that it was the town where James D. Vaughan built a music-publishing business and pretty much invented Southern gospel music in the process.

By most accounts, Vaughan was a man of deep faith, good works, and constant prayer. His songwriting or publishing credits include God Holds the Future in His Hands, Beautiful Star of Bethlehem, and He’s My King, among others. Martin hoped to get, as she puts it, “a nostalgic essay,” out of her weekend. It was definitely not what she expected when, at the local library to get some information on Vaughan, the librarian casually mentioned, “I’ve always suspected James D. Vaughan ran the local Klan.”

“So much for my fun, easy story,” she wrote.

The evidence certainly does show that Vaughan had some association with the Ku Klux Klan. In addition to the Southern gospel music for which he became known, Vaughan’s name appears on such ditties as “Wake Up, America, and Kluk, Kluk, Kluk,” which features such lyrics as “the right will surely win, we’re winning day by day, Each night thirty thousand put on the K.K.K.” She discovered that Vaughan moderated Klan rallies, that his quartets sang at them, and that he broadcast them on a radio station he owned. Several other songwriters’ names are on Klan-supportive songs that Vaughan published.

Martin writes that she was “shaken” by her discovery that some of her favorite music was now tinged by racism. “What should I do with this knowledge?” she asked. The rest of the article describes her attempts to work through the implications of it through conversations with several other people who have musical, cultural, and faith connections to Southern gospel music. I highly recommend reading the post, but I’ll include her own summary of her conclusions here:

We can’t jump to solutions because we have yet to find the right questions. We can’t trust the answers our guts give us because all of our guts—every last one—have been acclimatized to a world of inequality and injustice. We must be more interested in learning about the silenced parts of our history than in writing a cohesive narrative, more anxious to listen than to speak, more eager to give grace than to cast judgment.

Only then can we begin to disentangle the hoods from the relics in our attics, the laws written by our governments, the lessons taught in our schools, and the songs of worship canonized in our hymnals.

The conversations we’ve been having aren’t easy, are they? Statues and flags that expressly prop up the legacies of folks who were fighting a war against our country in support of slavery are one thing. It would be nice if the cancer were so easily excised by dismantling a few monuments. What we learn, though, as we pay attention to our history is that racism can’t be carved away like that. It runs too deep and has spread too widely.

Martin points out what we should have known: Southern gospel music is a tainted legacy. John Newton was a slave trader before he wrote Amazing Grace. Martin Luther’s anti-Semitic writings almost certainly influenced further anti-Semitism, including the kind practiced in Nazi Germany. Most denominations are touched in some way by racism. You don’t have to kick over many rocks to find it.

So what do we do about that? Do we “cancel” songs and songwriters when we discover the racism in their pasts? Do we simply shrug and say “They were a product of their time”? Do we only embrace those, like Newton, who acknowledged and repented of their racism?

I don’t think the “product of his time” argument holds up to close scrutiny. While many influential people in the South in Vaughan’s day were part of the Klan, many were not. “Everybody was doing it” wouldn’t have been a good excuse when you were a kid, and it isn’t for adults. We’re all influenced by the times we live in, but we’re all responsible for our choices. It’s too easy to let bad behavior slide by as a product of the time.

But the speed with which we cancel the good work of those whose pasts hold some reprehensible acts sometimes seems too easy as well. It lets us feel good about being on the right side without asking the really tough questions about our world or ourselves. We might very well choose not to use some music because of the racist views or actions of their creators, but let it be a community decision made of careful thought, with acknowledgement that our own hands are hardly clean, either.

So what then? What do we do when we discover that more of our worship music is written by racists, or misogynists, or whatever? What if we discover that one of the editors of our favorite Bible translation has used racial slurs, or that a respected author has disparaged Asians?

It seems to me that we — and by “we” I mean white Christians — often are asking the wrong questions in circumstances like this. We’re asking “Should I feel bad about this?” Or maybe we’re asking, “Why should I have to give up something I like?” Paul reminds us that there are better questions to ask. He says that God gives “greater honor to the parts that lacked it” in the church. That is, he wants those in the church who through no fault of their own are disregarded and discriminated against to receive special honor from the rest of the church (and not merely equal treatment). We should have “equal concern for each other.” Most to the point, I think, for this discussion: we should suffer when another part of the church suffers (instead of disregarding that suffering), and we should rejoice when they receive honor (instead of resenting it).

We should be, in all our churches, confronting the legacies of racism. Our ancestors’ sins are not ours, but they often have much to do with the pain our sisters and brothers of color feel. We should recognize that suffering and suffer with them, knowing that if healing doesn’t come easily for them, it shouldn’t for us either.

So here’s my thought: White Christians, who throughout church history in most places and times have had most of the power and honor, should simply defer to their Black sisters and brothers on questions like this. If using a song causes even one of my brothers and sisters of color pain, then how could I possibly feel good about singing it? Why wouldn’t I share their pain and offer them the “greater honor” of hearing them and giving up something — even something important to me — for them?

Martin is right, I think, when she says, “all of our guts—every last one—have been acclimatized to a world of inequality and injustice.” Not by our choice, perhaps, or not completely by our choice, but acclimatized nonetheless. It takes love to instead condition our guts to share in the suffering of others, and rejoice when they receive long-overdue honor.

It takes love. Thankfully, we follow the one who loved us to the point of death.

May we love in the way we ought to have learned from him.