Blessed are the poor in spirit,

for theirs is the kingdom of heaven.

Blessed are those who mourn,

for they will be comforted.

Blessed are the meek,

for they will inherit the earth.

Blessed are those who hunger and thirst for righteousness,

for they will be filled.

Blessed are the merciful,

for they will be shown mercy.

Blessed are the pure in heart,

for they will see God.

Blessed are the peacemakers,

for they will be called children of God.

Blessed are those who are persecuted because of righteousness,

for theirs is the kingdom of heaven. 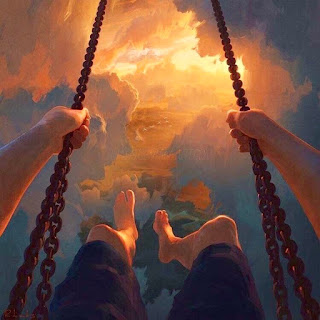 There are a couple of houses in my neighborhood, in the next block over, that have looked like the houses to be at this summer. They’re twin houses, built side-by-side on what used to be a single lot. Young families have moved into both of them, and this summer the front yards of those houses, and the apartment building next door, have been filled with kids.

I walked by there today and counted 10 kids running around these small city lots. Two were on a swing suspended from a tree. A few were playing hopscotch or something on the sidewalk. A couple of boys were chasing each other with water guns. A group of older girls were standing around giggling about something. Three parents lounged on the front porches, talking and loosely supervising.

What it looks like is that these parents, facing a long summer of social distancing and working from home, decided just to turn their houses into an informal summer camp. Every time I walked by there this summer, the kids were out playing. The parents were talking. In the absence of other demands, other appointments, they were all taking the time to get to know each other, enjoy being together — to, surprisingly enough, have fun.

While many of us will remember 2020 as a long slog through uncertain times, I think those kids — and maybe even their parents — will remember a summer spent enjoying sunny days and good friends.

They’ll remember that they were blessed.

Funny thing about blessings: they often seem to come when you’re not looking for them, in the places you don’t expect to find them. Maybe that’s because blessing and expectation seem to be inversely proportional. By definition, blessings are unanticipated. The more we look for them, the more we try to organize our lives to produce them, the more they elude us. Even when good things might happen, they don’t feel so much like blessings. Just the expected outcome.

Maybe that’s why Jesus said that, in the kingdom of God, blessedness is for the poor in spirit, or the grieving, or those who have no standing to advocate for their own interests, or those who need justice so badly that they can taste it. Blessedness is for those who care enough about others’ hurt to feel compassion, the uncomplicated who want nothing more than to see God’s face, and those who work hard for peace but who aren’t surprised or deterred when for their efforts they get insults, violence, and rejection. None of the people he mentions to open his Sermon on the Mount about life in God’s kingdom are looking for blessedness. None of them are expecting it in their current circumstances. Yet, he says they’re blessed.

He doesn’t mean that they just need to hang in there because they’ll go to heaven when they die. By “kingdom of heaven,” Matthew means what the other Gospel writers mean when they say “kingdom of God.” They’re blessed, Jesus says, because when God reigns, when his will is done on earth as in heaven, then they will receive what’s lacking and experience the blessedness of God. Of course, there’s a sense in which God’s will won’t be done on earth as in heaven until Jesus returns. Until then, there’s always an element of anticipation to our faith. We’ll always have a “looking-forward” orientation.

But there’s also a sense in which God’s kingdom has already come. His second coming will complete God’s reign, but his first coming inaugurated it. That was his message: “Repent, for the kingdom of God has come near.” When we obey Jesus and turn our attention to the things of God, then he reigns in our lives. His will is done — imperfectly, inconsistently, in fits and starts — in the part of the world we inhabit and influence. As Jesus takes shape in our lives, so does the kingdom of God.

And with it, the blessedness of the kingdom.

That’s what the church is — people in whom the kingdom of God is taking shape. And, together, as we treat each other as the King requires and get busy with the King’s business, the kingdom takes on more definitive outlines. Christ creates in us a community of people in which those who mourn are comforted, the meek are honored, those desperate for justice are satisfied, mercy is given and received, God is visible, and God’s children live together in peace.

It isn’t child’s play. The work we have to do shouldn’t be trivialized. It requires swimming against the current. But we can do it, and in doing it make a difference in our neighborhoods and ultimately, the world.

In troubling times, may we be the place everyone wants to be.