Saying Yes to the Lord

…Don’t you know that all of us who were baptized into Christ Jesus were baptized into his death? We were therefore buried with him through baptism into death in order that, just as Christ was raised from the dead through the glory of the Father, we too may live a new life. For if we have been united with him in a death like his, we will certainly also be united with him in a resurrection like his. For we know that our old self was crucified with him so that the body ruled by sin might be done away with, that we should no longer be slaves to sin—because anyone who has died has been set free from sin.

Now if we died with Christ, we believe that we will also live with him. For we know that since Christ was raised from the dead, he cannot die again; death no longer has mastery over him. The death he died, he died to sin once for all; but the life he lives, he lives to God.

In the same way, count yourselves dead to sin but alive to God in Christ Jesus. 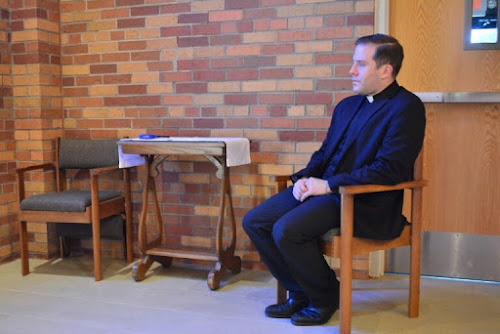 Maybe you caught the story of Father Matthew Hood last week. Father Hood is a priest in the
Catholic Archdiocese of Detroit who stumbled upon an uncomfortable revelation: while watching a video of his own baptism in 1990, he discoveredthat the deacon who performed the baptism got the words of the liturgy wrong.

I suppose that would just be a little unsettling, exceptfor the fact that the mistake made Father Hood’s baptism invalid according to the Church.

Which meant his ordination as a priest was invalid.

Which meant that any sacraments he has performed were invalid.

Thankfully, I guess, he’s only been a priest since 2017. In addition, baptisms in the Catholic Church don’t have to be performed by a priest (just as long as the words are right!), so the baptisms he’s done remain valid. But there are some people in the parishes Father Hood has served whose marriages, confirmations, and so forth may have to be revisited. The Archdiocese in contacting those folks who might have been affected. Matthew Hood has been baptized, confirmed, and re-ordained to the priesthood. So all’s well that ends well.

Oh — he words the deacon who baptized Matthew got wrong? He said “We baptize you…” instead of “I baptize you…”

I know, that seems kind of picky. “We” sort of takes in the family and friends present, doesn’t it? It includes the community in what is very much a community event. When I first read the story, I as a non-Catholic was thinking something very close to what you might be thinking: Why in the world does one word said 30 years ago make such a difference as to invalidate a priest’s baptism, ordination, and ministry?

So I did a little research, and it turns out — as you might have guessed — that the mistake isn’t so innocuous as it seems. The position of the Church is that “When a man baptizes, it is really Christ himself who baptizes.” (Second Vatican Council) Baptism is a sacrament in the Catholic Church, by which they mean that God actually does something when the rites are carried out. The “I” in the baptismal formula isn’t the one physically administering the water and saying the words. It’s Jesus himself. That being the case, there isn’t much wiggle room in the wording of the liturgy.

“So what?” you say. Understandably so. Unless you’re Catholic — and maybe even if you are — all this seems like much ado about nothing. As a non-Catholic, this story too easily confirmed my prejudices and assumptions about Catholicism: that it’s bound by tradition, that it cares more for its traditions than it does Scripture, that it values its institutional identity over people. Those prejudices and assumptions have been proven wrong every time I’ve ever researched some Catholic doctrine. It wouldn’t surprise anyone to learn that I often don’t agree with their conclusions, but the Catholic Church has reasons for everything they do, reasons that go back much farther than some of the reasons my tribe of believers does what we do. Prejudices do nothing to contribute to understanding, appreciation, and dialogue. Instead of finding fault and looking for the worst in those we disagree with, may we instead assume that they want to please the Lord too, and give them the benefit of the doubt.

The story also reminds me that actions, even small ones, are important. I share the belief of the Catholic Church that baptism matters, though my fellowship of churches practices the total immersion of adult believers. We don’t really talk about baptism — or anything — as a sacrament, but if you pin me down I think I do have a sacramental theology about it. It seems to me that in that small thing of a believer being immersed in water — an act many dismiss as symbolic of something that already happened when a person “asked Jesus into their life” or whatever — that God does something. He sends his Spirit. He shares his life. He forgives sin. He adds us to the church. Though our cultural tendencies these days lead us to dismiss the importance of religious rituals in favor of being “spiritual,” things like baptism, communion, church attendance, and so forth — and the words we say about those things — matter. They can be the means by which God pours his grace into our lives. He certainly can and does work through other means too, but we cut ourselves off from acts like these at our peril. While I don’t worry a lot about the words used in baptism because I don’t have centuries of tradition to defend, I do believe that if God really does something in it then it must matter.

I also appreciate from this story that the rituals we practice have importance to the whole community of faith. My baptism isn’t just about Jesus and me — it’s about Jesus and me and all the members of the church or churches that have formed me in Christ and helped me to come to the point of faith. It’s about my connections to the body of Christ worldwide. It’s about my place in the ancient story of God’s salvation, and those who came before me. It’s about those who will continue the story after I’ve gone to be with the Lord. The individualistic ways we tend to celebrate and think of baptism, communion, church attendance, Bible reading, prayer, and so forth need to be challenged by ways that are more based in community, in sharing with each other, and in listening to each other.

Finally, I was so impressed with Father Hood’s reaction to all of this. He had nothing but grace-filled words to say about the “pastoral care” and reassurance he received from the Archdiocese. When he was asked whether or not he’d had any thoughts before his reinstatement that this might be an opportunity to rethink his vocation, he said no. “The grace and freedom to say ‘yes’ again was a joy. It was a grace the Lord gave to me, being able to say ‘yes’ to the Lord again, in some ways for the first time.”

Every day, we get opportunities to say “yes” to the Lord: to bless the community of faith and to live out the new life to which our baptisms have opened us. May we all be as eager as Father Hood to accept our vocations as priests, along with all of our brothers and sisters in Christ.