Are not two sparrows sold for a penny? Yet not one of them will fall to the ground outside your Father’s care. And even the very hairs of your head are all numbered. So don’t be afraid; you are worth more than many sparrows. 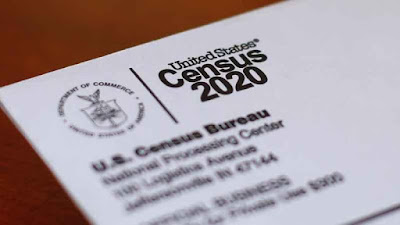 Earlier this week, the Supreme Court ruled that the 2020 Census could end on Friday. The effort to count every person in the country, required by the Constitution, had already been delayed by the pandemic. The new deadline, set for October 31st, was deemed too late for the Commerce Department to deliver the results to the President by the deadline required by law, so the Secretary of Commerce, Wilbur L. Ross, Jr., ordered the deadline moved to September 30. After legal challenges, the Supreme Court ordered the count stopped at the end of this week.

The Census, of course, is essential for determining representation in Congress and the distribution of government funds. Many experts worry that ending the count early could cause “irreversible damage to efforts to achieve a fair and accurate census.” Justice Sotomayor, the lone dissenter in the Supreme Court decision, wrote, “the harms associated with an inaccurate census are avoidable and intolerable.”

The problem is that it takes a while to count everyone. It’s possible to respond to the Census online, by phone, or by mail, but not everyone does. So Census workers go out into neighborhoods and knock on doors and ring bells to fill in the gaps. Many of the people who the Census could most help — racial minority groups, poor people and young people — are underrepresented in the mail, phone, and online responses. Immigrants who are out-of-status don’t show up sometimes, whether by their choice or by being overlooked. So the need for an adequate timetable.

While the Census Bureau claims that they’ve counted 99.9% of households, most experts outside the Bureau seem to dispute that number. It does not represent the number of households that have competed the form. It probably takes into account any household checked off the list, even if it’s just on the word of neighbors about who lives at a particular address. The fact that the administration has already announced that it would try to exclude those who are out of status from the final count makes it additionally questionable that the report is actually intended to represent the actual number of people living in the United States.

I don’t know, maybe you think that’s as it should be. I don’t, personally. One of the important things that I think living in this country should mean is that, quite literally, everyone counts. We haven’t always lived up to that ideal, of course. In our early years, only white men counted. Black men were eventually counted as ⅗ of a person, and in 1868 were finally told they counted as whole people. Women finally counted enough to be allowed to vote in 1920. It wasn’t until 1964, almost in my lifetime, that Federal Law finally came to reflect the ideal that everyone should count, whatever their race, gender, religion, national origin, or sexual orientation. And, of course, the fact that laws are on the books doesn’t mean that, every day, people don’t still get the message that they don’t count. We can, and should, do better. The Census should be one means of doing better, a strictly data-driven, non-partisan exercise to make sure that people are counted so that the government can, hopefully, do a more effective job of governing.

I wonder if the group of enslaved people concentrated in Goshen, in Egypt, had been counted on the most recent Egyptian census before God told Pharaoh to let his people go?

I wonder how the Babylonians counted the people they forcibly captured from Israel and dispersed in their cities? I wonder if they bothered to count them at all? Whether they did or not, God counted them and knew their number when he brought them home. He knew who didn’t make it, too.

I wonder if Jesus was counted in a census? I wonder if the census-takers got the news that a baby boy had been born to Mary and Joseph? I don’t know if he counted to the Romans at his birth, or even to his countrymen. Yet God said “This is my Son.”

I know at his death he counted only as a troublemaker, one more pretender king to be dealt with as ruthlessly and efficiently as possible. Only the few disciples and family members present at the cross seemed to care much about his death. Yet God raised him up.

People count with God. Even the people who aren’t counted by anyone else. Especially them.

Jesus, of course, pointed out that if God takes care of the birds, he certainly knows and takes care of us. “Every hair on your head is numbered,” he said. God knows us. We count with him, however unimportant the world might tell us that we are. He knows our failures, he knows our shortcomings, he knows the things no one else wants to know. And he chooses to love us and to be faithful and generous to us.

I want you to know that because there are a lot of ways in this world that we can get the impression that we don’t count. Sometimes it’s because of the people we elect to represent us. Sometimes it’s because we don’t measure up in some way or the other to what everyone else seems to think matters. Sometimes the people we’re closest to give us the impression what we don’t count, and sometimes we even convince ourselves of it. But I want you to know, if you don’t already or if you need reminding of it, that you count with God. Whatever your skin color is, whatever your gender (and whether or not you feel confident about that), wherever you’re from, whatever your bank balance says, wherever you live, whatever you wear, whatever your sexual orientation or political party or church affiliation (or lack of one). To God, you count. You matter. He cares about you: what you’re going through, where you’ve been, where you’d like in your wildest dreams to go.

I want you to know as well that because you count with God, you count with me. Oh, I’m not going to be perfect at that, I’m fairly sure. Still, that’s my aspiration. It’s the church’s aspiration too, and sometimes we even get it right. We want to reflect the way God cares about people in the way we care about people. We don't think we deserve any credit for that — it’s just what God expects of us.

May you always count, and always know that you count, in the eyes of the people who matter most to you.

And may you always know that you count with God.

And may we as God’s people always show those we know and come in contact with that they count. That they matter. That they’re seen and heard, that God knows them and cares about them, that he’s shown it in Jesus and through his church.

Whether our government acknowledges that all people count or not, we know what God thinks.