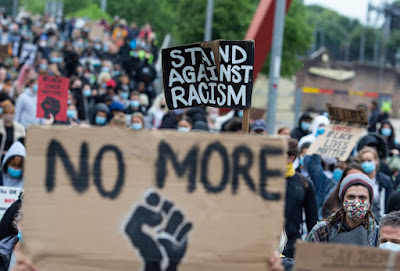 A friend shared with me this week a document he put together for his church on systemic racism.

My friend, Greg, is a husband and father of adult children. He’s a former Marine helicopter pilot. He retired a couple of years ago from a career as an executive of a Fortune 500 corporation. He was an elder at the church I serve. For his next act, he intends to begin formal study of the Bible so he can more effectively help people come to know Jesus.

And he would hate it that I just felt compelled to list his qualifications so maybe you’d listen to what he says.

Because that’s part of the problem: Black people and other people of color are often required to demonstrate that they’re “one of the good ones” before their voices are heard when it comes to racism. Greg related to me in a conversation we had recently that seemingly innocuous questions that they were asked as they visited churches trying to find a home after their move — “What do you ?” “Where do you live?” — can for people of color carry with them  a subtext — “Are you one of us?”

That’s something I don’t think I’ve consciously intended when I’ve asked those questions — though, maybe, sometimes. Usually, in that situation, I’m wondering if this person lives in the neighborhood and therefore might potentially come to be a part of my church. And so I relate to the question you might be thinking right now: “Well how would I know that? How would I know how someone else might hear that question?”

The answer, of course, is that Greg just told us.

See, white people like me tend to get defensive when we hear someone talk about systemic racism. We come at it thinking we have to defend our own record on racism. We come at it feeling like we have to defend our country, or our race. At worst, we accuse our accusers of being racists themselves because they bring up the subject to begin with. At best, we throw up our hands in frustration and ask how we’re supposed to fix the problem if we don’t even see it. We need to stop it. When Blacks and other people of color tell us about their experiences of racism, they don’t need us to fix it or tell them why they’re mistaken. They need us to listen, sympathize, show compassion, and do better.

Greg pointed out in the document how Black people in our world are “always on guard” and “always understanding vs. being understood.” Think about that for a moment. At work, at school, at a store, taking a walk in your neighborhood, even at church — think about having to always be on guard because of your skin color, knowing that someone might be watching you, wondering about you, questioning your qualifications to be there, maybe even with their hand in a pocket on a phone with the “9” and “1” already dialed.

Imagine always having to work to understand other people and behave in ways that will steer you around conflicts, with no confidence that those same people understand you.

Earlier, I shared Greg’s “qualifications” in part because I want you to understand that this is a guy who has worked hard, served his country, been educated, was successful in his career, has a strong family, and has shepherded a church. He’s a guy who seems to have a big chunk of the American Dream. Still, he sees the racism that’s deeply entangled in our American Dream.

This is why he sympathizes with athletes who kneel during the National Anthem, knowing that it isn’t about the military but about those for whom the promise of America is still denied. That’s why he points out that the phrase “Black Lives Matter” should be affirmed by all, without qualification — and that to push back against it without trying to understand where it comes from is part of the systemic racism that it challenges.

Greg writes: “Fifty-two years ago Dr. Martin Luther King, Jr. marched with black sanitation workers holding signs that read, I Am A Man. Did that mean that white men were not men? Of course not, but racism was preventing the sanitation workers from living their version of the American Dream.”

A couple thousand years ago, a guy named Paul wrote, “I have become all things to all people.” He wrote those words in a world in which the big racial divide was between Jew and Gentile. The church of his day was divided as well, between the Jews — through whom Jesus came, and through whom God had initially revealed himself through the Scriptures and through the Law — and the Gentiles, who were coming to Christ at an increasing rate and who might not have the same inborn reverence for the Scriptures. Jewish people were the early leaders. There was discrimination against the Gentiles. But Paul, a Jew, said he would become “like one not having the Law” in order to help the Gentiles hear the gospel of Jesus. He’d go out of his way to understand them. Listen to them, hear them. Sympathize with them. Speak up for them with the leaders of the church. He didn’t do this because he had suddenly developed an ambivalence toward his own people. He did it because that what was necessary for the gospel to he heard, for healing to begin, for God’s work to be done in the world.

What is necessary for God’s work to be done in the world today isn’t any different. We — the church, especially — need to hear what Black people and other people of color in and outside of the church are saying to us about racism. We need to respond to this moment in history in the right way. We don’t need to be defending ourselves, our country’s history, our political system, or our churches’ records. That doesn’t get the work of God done in the world. That doesn’t communicate the love of Jesus or open our communities, our nation, or ourselves to the presence of the Holy Spirit.

Instead, may we commit ourselves to being “slave[s] to everyone, to win as many as possible” — not to our politics, or our way of seeing the world, or to our way of thinking, but to the gospel. May we bend over backward to hear what people of color are saying about justice. May we listen carefully to those who don’t have the confidence in the rule of law that we might have. May we listen with compassion when Black people talk about the times they’ve been made to feel weak and powerless, and may we lift our voices with them.

If we can’t do that, why would anyone want to hear the gospel from us?

If we can’t do that, why would anyone believe words about the love of Jesus from our lips?

They wouldn’t, and they shouldn’t.

And may we, finally, share together in all the blessings of the gospel.