You are the light of the world.  A town built on a hill cannot be hidden. Neither do people light a lamp and put it under a bowl. Instead they put it on its stand, and it gives light to everyone in the house. In the same way, let your light shine before others,  that they may see your good deeds  and glorify  your Father in heaven. 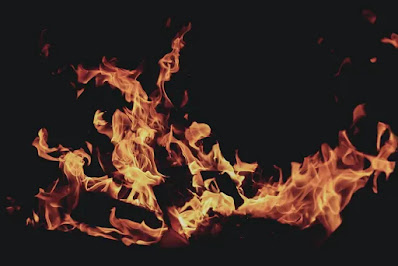 Last Sunday, demonstrations against the government of Chile, corruption in the national police, and economic inequality turned violent in Santiago. Protestors set fire to two churches in the parish of the national police, cheering and recording while the spire of one of them collapsed. The two churches are possibly burned beyond repair. As the images were shown on TV, the Archbishop of Santiago, Celestino Aós, said, “Violence is evil, and whoever sows violence reaps destruction, pain and death. Let us never justify any violence, for political or social purposes.”

Protestors had something of their own to say. One said it succinctly by posting a photo of herself inside one of the churches, with what looks like a pulpit on fire behind her. The photo is captioned with these words, from Spanish anarchist Buenaventura Durruti: “La única iglesia que ilumina es la que arde.”

In English, “The only church that illuminates is a burning church.”

I don’t really know why the protestors chose those two churches, though being known as the parish of the national police might have contributed. I know there is an ongoing clergy sexual abuse scandal in Chile in which 360 accusations have been made against Catholic officials, leading to the 2018 resignation of every Chilean bishop. A recent study shows that the percentage of Chileans who say they trust the Church has dwindled from 51% to 13% in 20 years. It seems like a sure bet that the Catholic Church in Chile has been a part of the problem as much as they’ve been a part of the solution. Whether or not burning down a couple of church buildings is appropriate justice I leave for others to decide — and, ultimately, God.

I’m interested in the slogan on that photo: “The only church that illuminates is a burning church.”

It seems to me that the church — the institutional church, I mean — in a lot of places is completing a journey. At one time, the church was at the center of a community, a city, even a country. The church had leverage, influence, even power. It functioned as a fortress for the status quo and as a gateway for change.

Eventually, though, the power of the institutional church started to wane. People began to look elsewhere for counsel, guidance, and leadership. Churches became known as quaint organizations that upheld a past that was seen as more and more irrelevant. And easier and easier to ignore.

The church pushed back against this. They discovered political power. In America, what’s today known as Evangelicalism is more political now than ecclesial and bears little resemblance to the term evangelical. In hitching our wagon to political influence, though, the church compromises our identity. And, not incidentally, make ourselves a target for the anger of those on the other side of the political spectrum.

And so the church is increasingly perceived as part of the problem. Protestors believe that the only way for the church to have any relevance is as an effigy for the corrupt society they think we’re an essential part of. That we’ll only illuminate when the property that we own goes up in flames as an example to the rest of society.

Thing is, I don’t think Jesus would disagree with those words, “The only church that illuminates is a burning church.”

It’s right there in Matthew, isn’t it, in that famous “sermon on the mount?” “You’re light for the world,” he tells his disciples. But they own no property. They have zero political influence, zero connections in high places. They aren’t famous, or influential, or even very persuasive. They’re a motley little assortment of regular guys (including a few fishermen, a bookkeeper, a tax collector for the occupation government, and a terrorist who’d have liked to stab some government guys in the back) following an itinerant teacher and healer on a decidedly low-budget mission. Yet he calls them light for the world.

“You can’t hide a town built on a hill,” he goes on to say. The spiritual descendants of those disciples have tried, though. We’ve formed corporations and bought property and built impressive and beautiful structures all over the world — and then turned all our attention to filling them and maintaining them. “You don’t light a lamp and then cover it up,” he says. I wonder, though, if what we own and the shortcuts to influence we’ve sought haven’t become gilded bowls that hide our light instead of allowing it to be enjoyed by everyone in the house.

Even as I write that, I know it’s unfair. I know it doesn’t take into account the uncountable churches and disciples of Jesus who have done faithful and wonderful work for the Kingdom. Still, it’s hard to deny that the world is having a hard time seeing the church’s light. If we’re hiding it, if we’re covering it up, that’s on us, not them.

So how do we let that light be seen? It’s easy, at least in the conception: “let your light shine before others,  that they may see your good deeds and glorify your Father in heaven.” That’s how it’s supposed to work. Good works done faithfully by disciples of Jesus should lead to people glorifying God. In that, we’re pretty much just following Jesus, who “went around doing good.” He announced that God’s kingdom was brushing near to us and that it was a kingdom for all of us. But he also showed what that kingdom looked like: no more sickness, no more death, no more hatred or fear or sorrow or sin. And he wants his disciples to do the same.

Jesus wants burning churches — disciples burning with the fire of good works who can light up the world around us. It isn’t our nice buildings that will bring glory to God (though we can use them in ways that do). It isn’t political power that Jesus wants the world to see (though we should use our votes to do good for those around us, not just ourselves). It isn’t influential, well-known preachers or membership rolls full of the most impressive names or doctrinal correctness or even evangelistic zeal that Jesus says will set us ablaze with a light that our world can’t deny. It’s good works. Simple. Obvious.

How are we supposed to be the church in a world in which churches are seen as part of the problem? Same way we’ve always supposed to have been the church.

Let’s be known in our communities for good works. If our buildings are burned, may our communities miss us — and may we continue to show love, grace, compassion and kindness. May we get out from under our bowls, may we be a city on a hill whose lights no one can miss. May we be known for good works done with smiles and the name of Jesus on our lips — may we be known for good works and not the scandal, corruption, manipulation, and hunger for power that many people in our world think of now when they hear the word “church.”

Not everyone will glorify God because of it, I know. But if they don’t may it never be because of us.