Toward an Unbiased Reading of the Bible

“How foolish you are, and how slow to believe all that the prophets have spoken! Did not the Messiah have to suffer these things and then enter his glory?” And beginning with Moses and all the Prophets, he explained to them what was said in all the Scriptures concerning himself. 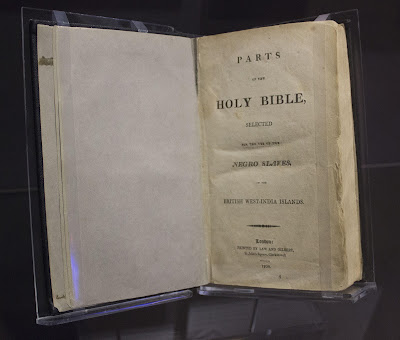 In the early 19th century, a Bible was published in England for use in the British West Indies (the British territory in the Caribbean). Maybe it would be more accurate to call it a “Bible,” because it actually contained about 10% of the Old Testament and about 50% of the New. Even its title acknowledged that, if this was the only Bible the reader had access to, they wouldn’t be getting the whole story. That was intentional, you see.

The title of the work was Select Parts of the Holy Bible for the use of the Negro Slaves in the British West-India Islands. The parts of Scripture that weren’t included, of course, were left out in case they might cause the readers to get the idea that no human being should be considered as having lesser value or should be held in captivity by another. That couldn’t be allowed, of course.

The existence of that “Bible” would be merely interesting if it hadn’t been used by Christians to put a religious veneer over a horrific practice. It illustrates the extremes to which people will go to find in Scripture confirmation of what they already believe. Thomas Jefferson famously cut and pasted (literally) a “New Testament” out of the teachings and life of Jesus — without any of his miracles or his resurrection. At a church I worked with years ago, a friend once answered my objections that a text he was using to support a position didn’t mean any such thing with, “I know, but I like to use it that way.” Well, sure. A Bible that supports what we already believe to be true is much to be desired.

Of course, as I point fingers at others, I have to admit the likelihood that at one time or another I’ve come to the text expecting to find what I was looking for, which is frightening since every week I stand before a church and speak to them what is supposed to be the word of God.

But here’s what I’ve come to realize: We all tend to see what we want to see in the Bible. If you want it to be a “love letter” from God, then you’ll be inclined to see those things in the Bible that emphasize God’s love and overlook the parts that don’t seem to be about that. Ditto if what you expect from the Bible is a pattern to follow. Same if you want reinforcement for your political agenda, or your sect’s doctrinal peculiarities, or confirmation that your list of sinful behaviors is the same as God’s. We all tend to look at the Bible as a magic mirror, reflecting back what we imagine we look like. None of us — not even preachers — are exempt.

That’s because of something called confirmation bias. Simply put, we have a tendency to see what we expect to see. We believe what we already think is true. We doubt anything that doesn’t fit within our already-settled beliefs. We dislike being wrong. We subconsciously want to protect our self-esteem from having to admit we may have something more to learn, so we’re always motivated to prove our opinions and our tribe’s positions to be correct. Combine that with our talent for finding faults in others while overlooking our own, and you have a recipe for disaster when it comes to discussion, dialogue, or collaboration. Frankly, it’s amazing we can ever get anything done together, as convinced as we all are that what we already believe is the unvarnished truth.

Conspiracy theories and fake news are confirmation bias at work, by the way. We amplify, exaggerate, and even create “evidence” to support what we already believe. The more emotionally charged or deeply entrenched the belief, the more likely it is that confirmation bias will occur. That’s why our social media pages turn into flame wars, or more likely echo chambers where we surround ourselves with people who think just like us, ingest only sources that support our opinions, and conveniently, feed our confirmation bias.

So don’t imagine for a moment that anyone simply reads the Bible and does what it says, as we’d sometimes like to believe. It’s never that simple. As surely as Jefferson or the publishers of the “Slave Bible,” there are parts that, for all intents and purposes, we take a razor blade to. There are parts that we inflate beyond all sense of proportion to become Doctrines of Extreme Importance. And then there are whole themes in Scripture that we can just cast aside in pursuit of evidence for what we already believe to be true.

And if we find some other people whose confirmation biases more or less look like ours — well, we call that a denomination, and we buy a church building and slap a sign on it, and spend our time raging about how wrong everyone else is and congratulating ourselves for being right.

So, it’s hopeless, then? We’re doomed to never learn anything new from the Bible? To never be challenged because of the unassailability of our confirmation biases? No, I’m still somewhat confident that we can read Scripture without our confirmation biases calling all the shots. For starters, we can be self-reflective enough to see that tendency in ourselves and know that what we believe about this or that text in this given moment may or may not be absolute truth (and probably is not). We know to be suspicious of ourselves and our motives, especially around a text or an issue in which we’re emotionally wrapped up. Before you settle on something you’re sure is right, let someone poke holes in it — preferably someone who’s different enough from you that they might not share your confirmation bias.

That’s the second thing: the Bible is supposed to be read in community. Our ability to own private copies (sometimes specialty Bibles that make sure to feed our confirmation biases) and enjoy “quiet time” alone with God can make us forget it, but the Bible is for the church together, and we haven’t read it until we read it that way. Others in the community will call your biases into question. They’ll challenge what you assumed to be true. They’ll make you think about the lenses through which you read the text. If you can go into those moments with enough humility and trust that God loves you and thinks you have great worth whether you have the Bible all figured out or not, your confirmation biases will be stretched and ruptured. (And that’s a good thing!) Church should be (though it sometimes isn’t) a really good and safe place to confront biases. If you can’t listen to a sister or brother in Christ who sees things differently from you, who are you going to listen to?

Connected to that, we need to give those who disagree with us about this text or that one the love that God requires. To paraphrase Paul, our Bible reading is clanging gong and crashing cymbal without love (and at least as annoying). Are people who believe differently from me really as stupid or ungodly as I’m making them out to be? Knowing and loving people who see things differently can help us overcome our biases.

Don’t forget, though: It isn’t entirely up to you. God’s Spirit is in you and with you as you engage with the Bible, opening your eyes. Read with your heart open to him and expect his guidance. The same risen Jesus who helped open the Scriptures to his disciples on the road to Emmaus is still living and will open them to you on the roads you travel. Be ready when he does, because that kind of experience, so I’ve been told, tends to set your heart on fire.