You are the salt of the earth. But if the salt loses its saltiness, how can it be made salty again? It is no longer good for anything, except to be thrown out and trampled underfoot.

You are the light of the world.  A town built on a hill cannot be hidden. Neither do people light a lamp and put it under a bowl. Instead they put it on its stand, and it gives light to everyone in the house. In the same way, let your light shine before others,  that they may see your good deeds  and glorify  your Father in heaven.

Our Father in heaven, let your name be revered. Let your kingdom come. Let your will be done — as in heaven, also on earth. 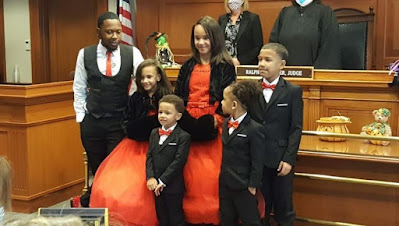 In America, we wait for a President to be elected.

Really, we’ve already elected him. It’s just taking a while to find out who we’ve elected. When the counting and legal challenges are done, I hope anger will cool and disappointment will settle. I’d like to believe, at least, that we’re still a country that can elect a President without coming apart at the seams. We always have been, at least in my lifetime. Some of the rhetoric, though, makes me wonder a little if we still are.

In the middle of all the politics and legal maneuvering, I ran across a story that I think we all need to hear. Maybe you missed it, but I think there’s something in it that’s important for us to remember. Especially those of us who are believers in Jesus.

Robert Carter is a young man who grew up in the foster care system in Cincinnati, Ohio. In that system, he no doubt learned some hard lessons about government. There are lots of kids growing up here in America right now who are learning the same kinds of lessons: that it doesn’t matter who’s in power, they’ll still be poor. That their schools will be underfunded. That when they get to school they’ll be hungry, unless some of those school meals that they hear some of their classmates complain about and make fun of are available. That they’ll be cold in the winter and hot in the summer. That they won’t be able to get medicine when they’re sick. That their parents, if they know them both, will work like slaves and they might still have to leave their apartment in the middle of the night because they’re behind on the rent. Or maybe that their parents won’t be part of their lives because of addiction or the legal system or the violence in their neighborhood.

Robert learned some of those lessons. In the foster system he was separated from his 8 siblings, one of whom he didn’t see for 14 years. So last December, even though he’s single, he took on the responsibility of being a foster parent to three boys: Robert Jr., Giovanni and Kiontae. That’s quite a responsibility in itself for a single parent, but Robert believed that his background made him uniquely suited for fostering the boys.

It wasn’t that simple, of course.

As he got to know his foster sons, he learned that they had two sisters, Marionna and Makayla, who were also in the foster system. They’d meet up from time to time, and all of them would cry when they had to go their separate ways.

So Robert worked, and saved.

He bought a bigger house.

And just this week, with Robert and the five kids in their finest coordinated outfits, they listened to a judge tell them they were, all six of them, officially a family. Robert has legally adopted them all. Just so they don’t have to be apart again.

Now, I think a feel-good story is much needed in 2020, and especially in the middle of a contentious election held during a raging pandemic. But this is more than a feel-good story. It’s a prescription. Better, it’s a mission.

While we wait for an announcement and watch election returns, let’s not forget what we really ought to be watching and waiting for. And praying for. God’s kingdom. To be a believer is to want God’s kingdom to come.

Some of my social media friends have reminded me of that this week. Their posts have said, in effect, “Whoever wins the election, I’m going to keep loving my neighbor and believing that it’s really God who’s on the throne.” That’s a good reminder. I would hope every Christian would affirm those words. We watch and pray for God’s kingdom to come.

Maybe it isn’t quite enough though. See, there are real people whose lives are drastically affected by political events like an election. Businesses — and livelihoods — can be lost. So can health care. Tell the people who come into our church's food pantry that politics don’t matter when they’ve lost a job due to increased health care costs, or when the program that keeps them from having to choose between buying groceries or prescriptions is cut.

Whoever wins the election, there will continue to be people who are utterly failed by those in power.

And so we must do more than watch and pray for the kingdom of God, because Jesus makes clear the kind of kingdom he means. This isn’t a kingdom where we’re all taken to heaven to avoid the messiness the world. The kingdom Jesus announced was coming, the one he told us to watch and pray for, is a kingdom in which God’s will is done — in which conditions on earth mirror what life is like in heaven.

That’s why Jesus says we’re to be salt people and light people whose influence for good is noted and in whom God is glorified. People like Robert Carter, who promised to be a dad to five kids who desperately needed him. People like friends of mine who have fostered and adopted children of their own. People who serve our world in ways that perhaps make a more lasting difference than a Presidential election. People who love like Jesus did: who love those who are most in need with a self-giving, sacrificial abandon.

People who watch and pray for the kingdom of God, but who work for it too.

As you watch and pray for God’s kingdom, then, find ways to work for it. We don’t create it with our actions. We don’t qualify for it with good deeds. It only comes at all in Jesus, and will only come fully when he appears. Still, when you find ways to create space in which his will is done, you give our world a glimpse of what that kingdom looks like.

And you might just get a few others to believe in that kingdom and to watch, pray, and work for it alongside you.