Christmas With the Gospels: Mark

Jesus and his disciples went on to the villages around Caesarea Philippi. On the way he asked them, “Who do people say I am?”

They replied, “Some say John the Baptist;  others say Elijah;  and still others, one of the prophets.”

Peter answered, “You are the Messiah.” 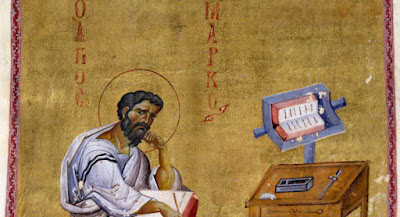 As we wait for Christmas, I thought I’d take four weeks here to take a wide-angle look at each of the Gospels, the four stories of Jesus’ life from the New Testament.

It’s interesting that we have four. A bias in our understanding of story and information is that multiple accounts that differ in some of their details can’t possibly be accurate. We’ll look a little more closely at the process through which our Gospels came to be in later posts, but for now it’s important to note that the church has long accepted four accounts of Jesus’ life that differ in many details and have been shown to be notoriously difficult to harmonize. Beyond those details, though, each Gospel seems interested in its own themes and presents Jesus in different (though complementary) ways. Part of the value of taking a long view of each Gospel is to note some of these themes and ways of presenting Jesus that can get lost.

The Gospel of Mark is probably the earliest written of the four. Mark moves — the author frequently uses the word euthus — “immediately.” It starts off at a sprint, no birth story here — “The beginning of the good news about Jesus the Messiah, the Son of God.” From the jump, Mark wants his readers to know who he thinks Jesus is. We’re moved quickly through Jesus’ baptism by John (where God calls Jesus his Son), his time in the wilderness “being tempted by Satan” and attended by angels,  to his dramatic return to Galilee preaching that “the kingdom of God has come near” and that his hearers should “repent and believe the good news.” Fifteen verses in, and we already know who Jesus is and what he wants us to do! Mark moves us along quickly; he doesn’t editorialize much, and even Jesus’ teaching is scarce.

There are many allusions to and even quotations of Scripture, but they’re rarely highlighted. One exception is the first one, the quotation from Isaiah (with a pinch of Malachi and Exodus), which concludes,  “Prepare the way for the Lord, make straight paths for him.” Mark is doing far more than just introducing John the Baptist; he’s announcing in Jesus that exile is finally ending. Jesus is building a highway in the desert along which his people can march to freedom. He’s re-establishing God’s rule over his people, in full view of the nations that at present dominate and oppress them. From his baptism, through Galilee and eventually Jerusalem, Jesus is entering hostile territory — healing disease, casting out demons, withstanding Satan’s temptations — and announcing the presence of God’s kingdom. In doing so he’s bringing hope, but also judgment. Thus, “repent and believe.”

We’re made to identify with the first disciples Jesus calls, following Jesus enthusiastically because we’re sure of who he is. His miracles, laid end-to-end through much of the first part of the book, overwhelm us. He heals a cross-section of sick people, many of whom the religious leaders offer no solace to. Sometimes his healings clash with their expectations about acceptable conduct.

While we begin the Gospel with the other disciples following enthusiastically, as the roller-coaster ride continues we also share in their increasing confusion. This guy isn’t who we thought he was. Maybe the best (worst?) example is the response of the disciples to Jesus’ question about his identity. They can answer who people say he is, but their understanding of who he is is hazier; Peter, their spokesman, gets one of Mark’s two titles right (“Christ” but not “Son of God”), then rebukes Jesus when he explains that being the Christ involves suffering, rejection, and death. "Get behind me, Satan," is Jesus’ response to Peter’s big revelation. He also tells his disciples that they shouldn’t tell anyone what they think they know of who he is.

In contrast to Peter, the rest of the twelve, and the religious leaders (who say Jesus is of “Beelzebub”), the demons know him, obey him and are subject to his authority. Those outside Israel confess him, though they re less obedient than the demons and testify to who he is even though he says they shouldn’t. In fact, in the scene in which Peter confesses Jesus to be Israel's messiah, Mark tells us that Jesus "sternly ordered them not to tell anyone about him.”

Scholars who study Mark sometimes call this the "messianic secret." While the other gospels often feature Jesus being pretty open about who he is, in Mark he’s more coy about it. It seems that this has something to do with the importance given in Mark to Jesus’ death as a necessary part of his identity as Christ and Son of God. Chapters 8-10 provide a pivot point for the gospel; there, Jesus predicts his suffering, death, and resurrection three times (8:31-9:1, 9:33-37, 10:32-45). After each prediction, the disciples demonstrate how little they understand and Jesus teaches them what it really means to be a disciple. They will have to “deny themselves and take up their cross and follow” instead of being concerned with preserving their lives (8:34-35). After the other two predictions, they show their ignorance by arguing about who is the greatest and seeking positions of power in God’s coming kingdom, to which Jesus says things like "those who would be great, must be the least," and "those who would be first, must be last.”

In Mark, Jesus’ death is not principally about the forgiveness of sins. (Jesus has the authority to forgive sins apart from his death.) It’s the expected outcome of living a Kindom-centered life in a world that honors other kings — for Jesus and for those who would follow him. Christ’ blood in Mark is less about the sacrifices of the Law and more about the Exodus story in which the blood of the passover lamb painted on the door posts serves as a sign of God’s covenant. Jesus offers his blood in the last supper as the blood of the new covenant (14:24), reaffirming the theme of a second Exodus we saw in the opening lines of the gospel.

Unlike the other gospels, Mark gives us no resurrection appearances. There’s nothing at the end except an  empty tomb, a young man in white robes who tells the women about resurrection, and a planned meeting with the disciples in Galilee, where the story begins. (In other gospel accounts they’re told to wait in Jerusalem.) The gospel ends with the women saying nothing to anyone "for terror and amazement seized them" and "they were afraid" (16:1-8).

The only human voice in the gospel to confess Jesus as Son of God is a Roman centurion (15:39). At the heart of the new Exodus is the Christ’s death, and Mark doesn’t let us hear him confessed as God’s Son until that moment. Jesus lives up to his identity as the one who brings about God’s deliverance of his people at the moment of his death. God shows that this mission of Jesus’ is still right on track by raising him from the dead and calling his disciples to meet with him to find out how to be a part of it.

May we hear Mark clearly on this point, and may we live with the expectation of meeting with the risen Lord and allowing him to teach us how to be his followers in proclaiming the good news of the Kingdom.