The Foreigners Among You

When a foreigner resides among you in your land, do not mistreat them. The foreigner residing among you must be treated as your native-born. Love them as yourself, for you were foreigners in Egypt. I am the LORD your God. 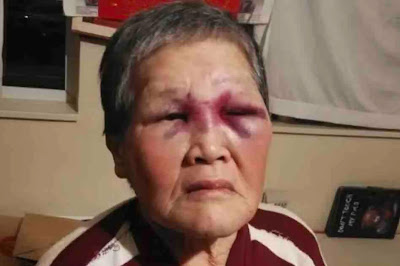 Xiao Zhen Xie was attacked last week as she walked near 7th and Market in San Francisco. It happened in broad daylight, at around 10 AM. A man later identified as Steven Jenkins hit her 83-year-old companion and then her before fleeing. He was quickly caught and arrested. The attack left her with a swollen eye that she can’t see out of. It left her companion, Knoc Pham, with a broken nose and neck fractures. The attack was unprovoked, and a possible racial motive is being investigated.
After the attack was reported nationally, someone started a GoFundMe to help with Zhen Xie’s medical bills and other expenses. Money started pouring in, and earlier this week the fund had accumulated nearly a million dollars. That’s encouraging.

You know what’s even more encouraging?

Zhen Xie has refused the money. She is insistent that it be given to the Asian American community to combat racism, her family says."She insists on making this decision saying this issue is bigger than her," an update on the GoFundMe page read. "This is my grandma, grandpa, and our family’s decision. We hope everyone can understand our decision.”

I think everyone does understand. We understand unselfishness when we see it. We understand a determination to not be made bitter and hateful after experiencing something so reprehensible. We understand when a person can see beyond their own pain to an opportunity to perhaps make a difference to someone else who’s suffering. We understand the difference it makes when someone sees herself as part of a larger community.

There are those in our country — hopefully few — who’ll tell you that immigrants are nothing but a drain on our resources. There are those in the church — hopefully even fewer — who’ll say it. Sometimes those attitudes even produce violence. As we look at the real issues going on at our southern border, at overwhelmed workers doing their best to deal with an untenable situation, some who would never say such things or act violently might wonder if it wouldn’t just be easier to not have to cope with immigrants at all. They might wonder if it’s worth it.

Zhen Xie gave away life-changing money. Clearly she didn’t come to America looking to get something for nothing. She gave it away to help the larger community because she wanted to contribute something to the city and nation that she calls home now. I have no idea what her citizenship or status are. She’s an American in the ways that matter, the ways that count.

I hope you have the privilege of knowing a lot of immigrant families. I do. Immigrant families live in my neighborhood. They’re part of my church. Can I tell you about a few?

There’s the husband and wife whose son died of COVID last year. She posted recently, “The more time passes the more I miss you son. It's a lie that time heal wounds. Simply with God's help you learn to live with pain.” Every day she posts prayers, Scripture, and encouragement for others as she learns with God’s help to survive and carry on. Her hope and faith shame me and strengthen me and show me how to trust God more completely.

There are three of the guys I serve with as elders and ministers, three of the best guys I know. They’re devoted to the Lord, the church, their families, and their communities. I know very well what that devotion often costs them. They serve with compassion, with joy, with love, and with faith. Much of what I know about ministry and pastoral care I’ve learned from them.

There’s another guy at my church who came to the US from a refugee camp in Guinea. He’s never expected help, but is always gracious and thankful if he receives it. He works hard and his contribution to the life of the church can’t be overstated. He has urged us for years to be mindful of others in faraway parts of the world who are in the situation he was blessed to be saved from.

There’s the guy who came to the US to work so that he could send money back to the church that he planted in his home country. A church that his wife and children are tending to there while he lives here. He misses them deeply. What a sacrifice.

And there’s the guy who’s come to my city to work for the Illinois Department of Health on COVID. His family is in another state; he’s only able to see them occasionally. He’s recently filed a waiver that would allow him to be fast-tracked for permanent residency since he has “exceptional ability” and is working “in the national interest.” He does, and he is, and we’re better because he’s here. I’m privileged to be able to pray for immigration officials to look favorably on his application.

The thing is, I could go on and on. I could name many more without even straining, many more people who have come to American to build lives for themselves and those they care about and whom I’m better for knowing.

God told his people in the Old Testament that they were to love the foreigners among them as they loved themselves, their own countrymen. They were supposed to be able to identify with foreigners, having been resident aliens in Egypt themselves. In fact, they were never supposed to feel like the Promised Land belonged to them: God brought them out of Egypt and gave the land to them, so they were to live there “like foreigners and strangers.”

When the writer of Hebrews wanted a way to describe people who put their faith in God’s promises instead of what they can gain in this life, he borrowed that phrase aliens and strangers — meaning that Christians ought to be able to relate to and sympathize with the immigrants among us if for no other reason than we should  know what it’s like to be away from home.

Maybe that’s sometimes our problem though: feeling like we’re away from home. The truth is that it’s easy to start feeling at home with our lifestyle, our standard of living, the way our neighborhood looks, our kids’ school, our property values. And then it’s easier to believe it when people in positions of power tell us that we should be afraid that these other people might take away what we love.

When you feel that way, remember that if our home is in heaven we have nothing to lose. That’ll let you concentrate instead on meeting all the wonderful people that could be a part of your life because they’ve come here from somewhere else.