What We Saw on Mulberry Street

Love is patient, love is kind. It does not envy, it does not boast, it is not proud. It does not dishonor others, it is not self-seeking, it is not easily angered, it keeps no record of wrongs. Love does not delight in evil but rejoices with the truth. It always protects, always trusts, always hopes, always perseveres. 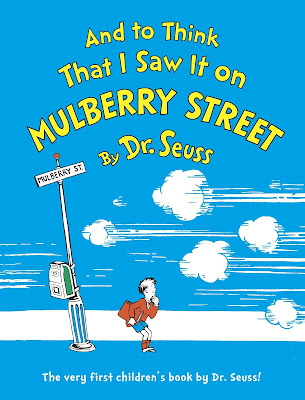 When I was a kid, Dr. Seuss was my jam. And To Think That I Saw It On Mulberry Street was my
favorite.

It’s true. My mom — and probably my dad — read it to me a lot. When I was able to read on my own, I read it a lot. There are still sections, to this day, that I have memorized.

So if you were following the news about Dr. Seuss this week, you can imagine that it sort of caught my attention.

In case you missed it: Dr. Seuss Enterprises, the foundation which has continued publishing the good Doctor’s books after his death, announced this week that they would be pulling from publication six titles that contain images of a racist and insensitive nature. “These books portray people in ways that are hurtful and wrong," Dr. Seuss Enterprises told The Associated Press in a statement. “Ceasing sales of these books is only part of our commitment and our broader plan to ensure Dr. Seuss Enterprises’ catalog represents and supports all communities and families.”

The titles affected are If I Ran the Zoo, McElligot's Pool, On Beyond Zebra!, Scrambled Eggs Super!, and The Cat's Quizzer.

Oh, and my favorite too. And To Think That I Saw It On Mulberry Street is on the list.

Of course, the decision by a publishing company to no longer publish titles that it owns and with which it can presumably do what it wants has caused all manner of anger, cries of censorship (if so, it’s self-censorship), and long diatribes about the evils of “Cancel Culture.” To be clear: Doctor Seuss books aren’t going away. If you want to read Scrambled Eggs Super! to your kids or grandkids, no one is going to kick down your door and haul you off to some Seussian nightmare of a jail. The organization has made a decision to remove a few titles from publication after listening to feedback from teachers and parents and consulting with a panel of experts. With everything else happening in our world, it should have been a fairly minor piece of news that might have had a few people scratching their heads and wondering what about Dr. Seuss is racist. But somehow, in this polarized world, Dr. Seuss has become the latest hill to die on.

I shouldn’t even dignify the whole thing by writing about it. But I’m already into it now.

First of all, the anger and “outrage” over the decision is predictable. It really isn’t even about Dr. Seuss — it’s about our discomfort with a world that’s changing. Some of us, Christians included, are bumping up against the reality that “things that used to be alright” aren’t any longer. We don’t know where we stand in such a world. We don’t know how far those changes are going to go. We wonder what else that we used to do, like, read, watch, listen to, and participate in will one day be declared Not OK. Or even suffer the indignity of the dreaded cancellation. Somehow we’ve come to believe that our personal rights to have what we want, when we want, whether it bothers anyone else or not are superior to, well, everything else.

And then right after that, I remembered exactly which image is the one that’s in question. I’m not kidding; even before I read which one it was, I could see it in my mind. I might have read Mulberry Street a few times to my son, but I’m pretty sure I remembered it from when I was a kid. Which says something about how influential those books are to young readers, and why Dr. Seuss Enterprises is right to take this seriously.

Look, the image in question doesn’t seem to be mean-spirited. You’d have to ask the Doctor about intent, and he’s not with us any longer. But it is an exaggerated caricature of an Asian person, with a bit of verse that reinforces a stereotype. I don’t think it contributed to prejudicing me against Asian people, but then again no one ever thinks they’re racist.

But this is the thing: What I think about Mulberry Street is irrelevant.

This is, I think, what we don’t understand if we’ve never been part of a minority. What we think is always most important. The way we want things done is the right way. What we say is offensive is, and what we say is not offensive isn’t, and if people are offended when they shouldn’t be then they just need to have thicker skin. What we intended is what should be heard and understood, and if you hear something in a way we didn’t intend then you just didn’t understand it. I don’t mean to be a jerk. I’m as guilty of it as anyone else. But it’s true. It’s the only way to explain why we can’t just hear it when someone who’s part of a minority says that something we’ve said or done is offensive. It’s the only way to explain why our knee-jerk reaction is so often to justify it and tell them why they’re wrong to be offended and even turn the blame around on them instead of just saying we’re sorry and doing what we can to remedy the situation.

Mulberry Street, if you’ve never read it, is about a kid named Marco who’s been tasked by his dad to pay attention to what he sees on his way home from school. Thinking what he actually sees — “just a plain horse and wagon on Mulberry Street” (it was written in 1938) — isn’t interesting enough, Marco turns it into a huge parade. Maybe that’s a parable. Maybe we prefer not to admit what we see: that some things are insensitive, have always been insensitive, and should have been dealt with decades ago. Maybe it’s more fun for us, and less embarrassing, to create a big parade out of Cancel Culture, censorship, and faux outrage.

I get it. I like Mulberry Street. But if an image in a kids’ book is offensive to a community of people, then I think we ought to call the plain horse and wagon what they are and get rid of that image.

If you’re a Christian, then I think we’d agree that we must deal with other people from an ethic of love. Let me just remind you of what Paul says about love. He says, among other things, that it’s patient. Patience is required to hear someone. He says it’s kind: What’s the kind response to this story? He says love does not boast and is not proud: In what ways does this story expose my pride? It doesn’t dishonor others — by demeaning them with an image, or by insisting that their offense at the image is misplaced. It isn’t self-seeking or easily angered and it keeps no record of wrongs — so let’s drop the Cancel Culture misdirection. It doesn’t delight in evil but rejoices with the truth.

Even when the truth stings a little.

Christians, let’s not make this a thing. This isn’t about censorship or the limitation of rights or Marxism or whatever fever dream we’re taking shots at this week. This is about people trying to do a good thing by making the world a little more accepting, a little more loving for people of all races and ethnicities.

Surely we can affirm that.