Another Easter on the Road


How foolish you are, and how slow to believe all that the prophets have spoken! Did not the Messiah have to suffer these things and then enter his glory?
-Luke 24:25-26 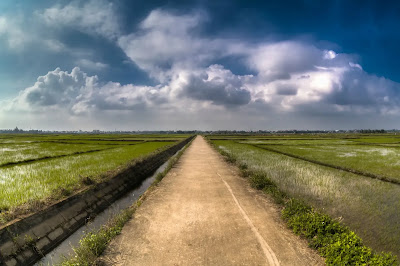 You could see it in their stooped shoulders, in the dark circles under their eyes, in the lines of worry on their foreheads and in the downturned corners of their mouths. You could see it in the shuffling way they walked, in their grave expressions and subdued gestures.
You could hear it, too, in their vocabulary: “They crucified him, but we had hoped that he was the one who was going to redeem Israel.” We had hoped. They had dared to imagine that God was going to bring about the long-anticipated freedom of Israel through Jesus. Whatever aspirations these two had - nationalistic, religious, political, economic - whatever aspirations they had were bound up with him. Tied to his fate. A week earlier, as crowds welcomed him to Jerusalem with waving palm branches and shouts of “Save now,” it must have seemed to them that all those hopes were on the verge of fulfillment.
Today, they're entombed with the body of their friend and teacher. Today their hearts are as empty as his tomb apparently is.
“We had hoped.” I imagine you've walked where they walked. Bet you've even said the words, haven't you?

To live in this world is to travel roads that turn unexpectedly, that traverse places you'd rather not go, and that seem to end abruptly in places that were never your intended destination. It's really a testament to the human capacity for hope that we keep getting disappointed; it's such a common part of our lives that you'd think at some point if would stop surprising us. But surprise us it does, and when it hits us in the gut and leaves us gasping for breath, one of the first things we'll always wheeze out is that, often against all odds, we had hoped.
Last year around this time, I wrote this:

“Rarely does something new come without trauma. That’s what unrelenting positivity sometimes overlooks. To get to Passover, Egyptians died. Egyptian parents, wives, and children mourned for the rest of their lives. As the Israelites praised God for leading them out of slavery, many Egyptians must have wondered what kind of God does that at the expense of so many lives.
“To get to Easter, you have to go through Good Friday. “

I wrote that when, I think, most of us still hoped that by this Easter, we’d be able to celebrate Jesus’ resurrection all together in our church buildings. That we’d be able to hide Easter eggs and have lunch with family and friends. Things are better, but we aren’t there yet. Some of us can be together, and that’s great and we’ll enjoy it, but inevitably some will still be missing. Some can’t be out yet due to their own poor health or the poor health of people they live with. Some will be missing due to other struggles that might have nothing to do with the pandemic. And there are some, of course, who have passed on since last Easter. We’ve spent our last one with them.
It’s understandable if dashed hopes send us back home, like those disciples on the road to Emmaus. Whatever the reason they might have been going to Emmaus, one thing is clear: the disciples are in Jerusalem. The text doesn’t say it explicitly, but it certainly looks like they’ve given up. To be honest, it’s understandable. What’s left for them? The disciples were all around because Jesus was; now that he’s gone, what’s the point? Might as well go somewhere else. There are lots of other roads to walk.
What do you do when hope is all in the past tense – when your present is bleak and your future nonexistent? One of the options, surely, is to give up hope, even to curse God. Who's to say that, pushed so far, they wouldn't do exactly the same? Not a claim I can make with complete confidence.
There is an alternative. But it's not intuitive. It's not one that we can come up with on our own.
It involves a change of heart, a widening of vision, and it requires the intervention of someone who sees things from a higher vantage point. “What are you discussing together?” a stranger asks the two discouraged disciples. And they tell him. They tell him about Jesus, and they tell him about their hopes, and they tell him about the cross and the tomb. But their hopes are so far gone that not even the fact that his tomb was found empty that morning can retrieve them. That's why they need him.
That's why we need him too; without him, our ruined hopes are overwhelming. Jesus reminds these two disciples that nothing that has happened is outside the boundaries of what God has already said must happen. “Foolish,” he calls them, “slow to believe,” because they should have realized that God's plans would not be derailed by something as trivial as a cross and a sealed tomb. They should have recognized that God wouldn't leave them alone to pick up the pieces of shattered hopes.
It takes a while, but finally their eyes are opened and they recognize the One who has been with them all this time. “Were not our hearts burning within us while he talked with us on the road and opened the Scriptures to us?!” they exclaim to each other.
All it takes is resurrection.
Today is Easter, the day when the church especially recalls that Jesus' tomb was empty. But if today looks a little more bleak than Easter should, if it's hard for you to hear the shouts of “He is risen!” because of the incessant thumping of “I had hoped” in your heart, then I want this to be more than the usual Easter for you. I pray that it will be a day when you come face to face with the risen Lord. I hope that he will open the Scriptures for you and help you to see that your lost hopes do nothing to derail the work of God in your life, and even that sometimes lost hope is necessary so that you will have room for the new hopes he wants to give you. I pray today that you will recognize him as he breaks the bread, hear the reassurance of the church that Jesus is alive, and that your heart will be set aflame again with hope, joy, anticipation, and excitement.
Jesus is risen, and that means that there is no place where God is not, no lost hope that cannot be restored or replaced, no discouragement that cannot be transformed into anticipation. Jesus is risen, and that means that sickness, sin, and death are defeated. Jesus is risen, and that means he walks with us in our discouragement and reminds us of the hope that because he lives, we live too. Jesus is risen, and in his empty tomb we see beyond a shadow of a doubt that wherever the road you travel might take you, he is never more than a step away. Jesus is risen. So hope lives, too.