I have told you these things, so that in me you may have peace. In this world you will have trouble. But take heart! I have overcome the world. 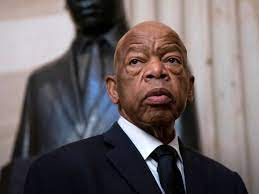 John Lewis. Lewis, who served as a Representative from Georgia’s 5th congressional district from 1987 until his death in 2020, was a leading voice in the fight for civil rights for Black people in the 1960s. As chair of the Student Nonviolent Coordinating Committee, he helped organized the 1963 March on Washington and the first of the marches from Selma, Alabama, to Montgomery across the Edmund Pettis Bridge in 1965. There, Thomas suffered a fractured skull after the marchers were ordered to disperse by State Troopers and instead stopped to pray.

Lewis continued to lead protests during his time as a Congressman, and was arrested at least three times: twice while protesting the Darfur genocide outside the Sudanese embassy, and once at a sit-in at the Capitol in support of immigration reform.

The quote I’ve been thinking of is this one:

“Do not get lost in a sea of despair. Be hopeful, be optimistic. Our struggle is not the struggle of a day a week, a month or a year. It is the struggle of a lifetime. Never, ever be afraid to make some noise and get in good trouble, necessary trouble.”

It’s hard to deny that there’s trouble in our world, our country, our city. You don’t need me to catalog all those troubles for you, I imagine. There are a lot of people in a lot of trouble. We’re all, I suppose, in some trouble. But the trouble I see in our world, most of it, is a product of our selfishness, our shortsightedness, our stubborn refusal to listen and see and care. It’s the result of corruption. It’s the result of the strong running roughshod over the weak. In my view, the trouble I see around us by and large is caused by a lack of love, a lack of grace, a lack of compassion, and a lack of will to see justice done. The trouble we have has come about because we’ve made essential things expendable and trivialized truth, honesty, kindness, peace, patience, faithfulness, and righteousness as unrealistic and unattainable.

It isn’t, in short, Good Trouble.

Good Trouble is the kind of trouble Jesus was in for when he spoke up at the house of Simon the Pharisee in defense of a woman everyone knew was “wicked.” Or when he told the religious folks of his day that the prostitutes and tax collectors were entering the Kingdom of God ahead of them. Or when he made them the bad guys in the parable of the tenants. Or when he drove the money-changers out of the Temple courts.

It was Good Trouble when he ate with Zaccheaus, when he touched a leper, when he opened his mouth and said “Blessed are the poor….”

And it was Good Trouble when he poked his nose out of his own tomb.

Maybe we forget that about him. Maybe that’s why, with exceptions here and there, the church doesn’t seem to be in the business of making Good Trouble anymore. More often we want to fit in. We become very chameleon-like, just copying the patterns and colorations of the world around us so that we don’t upset anyone. We must always own up to the fact of history that, in many of the worst atrocities our world has known, the church has been complicit, at least as the silent partner of those in power. And, still, the pressure is strong to toe the line and not make trouble.

Now, if when we’re opening our mouths all we’re saying are church-ified versions of the same words that have brought all this trouble on the world, then staying quiet is the right choice. But we have other words in our lexicons, Spirit-inspired words, gospel-colored words that bring healing and hope and grace. And Spirit-inspired, gospel-colored actions. And we ought to be speaking those words and doing those things and embracing the “necessary trouble” that it causes for us.

The early church, I guess, hadn’t had the time we’ve had to forget that Jesus promised us trouble in this world. In Acts 17, Paul and his colleagues are in the city of Thessalonica, where they’re dragged before the city officials and accused of “caus(ing) trouble all over the world“ and “saying that there is another king, one called Jesus.”

Would that it could be said that the church was causing trouble all over the world:

In Afghanistan, where a two-decade war has apparently accomplished nothing and a humanitarian crisis looms.

In every country, where a year and a half of pandemic has destroyed lives and wasted economies that will continue to destroy lives for years to come, while politicians grandstand and use the crisis to compete for votes.

At our borders, where human beings continue to gather to take a shot in the dark to escape from the poverty and violence that threaten their families, while the loudest voices raised cast them as villains out to destroy “our” country.

Within our own cities and towns, where we’re mortgaging future generations to pay for our own excesses in violence and corruption, and where people of color aren’t sure they can rely on the people sworn to protect them.

We ought to be causing trouble in those places and many others as we tell everyone who’ll hear us about another, King, Jesus, and show them what his kingdom is all about by creating among us communities of peace, service, compassion, grace, righteousness, and love. All things that will cause trouble in a world that runs on their opposites. Those who cling to power never want to hear about another king.

If you’ve been with us on Wednesday nights, you’re familiar with Amos 5:13, where God says of the Northern kingdom of Israel, “the prudent keep quiet in such times, for the times are evil.” I don’t think the prophet was saying that’s what should happen, just that it was happening. It is tempting to keep quiet in evil times. I know I’ve been guilty of it. It’s just easier. Or maybe, as Rep. Lewis warned, it’s because we despair of making a difference.

Instead of thinking how to make life easier for us and for ours, instead of being preoccupied with not making waves, what if we just accepted that being a follower of Jesus in such times will cause trouble? That, if we’re like him at all, we will be Good Trouble-makers.

But never forget that the trouble he caused, he caused by giving himself: by serving the poor and marginalized, by loving his enemies, and even by giving his life to break the power of sin and open the door to another way, another Kingdom.

Don’t be afraid of a little Good Trouble. Serve someone no one else is. And tell them Jesus sent you.