Do not judge, or you too will be judged. For in the same way you judge others, you will be judged, and with the measure you use, it will be measured to you. 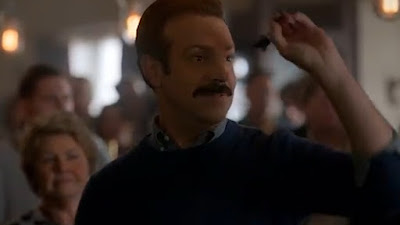 Lately, I’ve been watching the TV show Ted Lasso. Now, let me tell you up front that the language is rough. With a capital R-O-U-G-H. Very salty, to the extent that I hesitate to recommend the show to anyone. Having said that, it’s maybe my favorite show to watch right now.

Ted is an American football coach hired by Rebecca, the vindictive owner of an English Premier League football team, to get back at her horrible minority-owner ex-husband by running the team he loves into the ground. In a scene late in season one, Ted is playing darts in a pub with said ex-husband, Rupert. If Rupert wins, he can set the starting lineup for the team’s upcoming game. If Ted wins, Rupert isn’t to go anywhere near the owner’s box when Rebecca is there.

With Rupert ahead, they come to Ted’s final turn, and he asks the pub owner what he needs to win. “Two triple-20s and a bull’s-eye,” comes the answer — three incredibly difficult shots. As Ted lines up his first toss, he says this:

"You know, Rupert, guys have underestimated me my entire life and for years I never understood why. It used to really bother me. But then one day I was driving my little boy to school and I saw a quote by Walt Whitman. It was painted on the wall, and it said, 'Be curious, not judgmental.' I like that.”

"So I get back in my car and I'm driving to work and all of a sudden it hits me. All them fellas that used to belittle me, not a single one of them was curious. You know, they thought they had everything figured out, so they judged everything and they judged everyone. And I realized that their underestimating me -- who I was had nothing to do with it. Because if they were curious, they would have asked questions. Questions like, 'Have you played a lot of darts, Ted?’"

"To which I would have answered, 'Yes, sir. Every Sunday afternoon at a sports bar with my father from age 10 until I was 16 when he passed away.’"

Ted then stares at the board for a second and, of course, throws a perfect bull's-eye to win.

You know, all my life I’ve known that Jesus said we shouldn’t judge or we’d be judged. I’ve thought about that text a lot. Wrestled with it. I’ve gotten frustrated at the way church people ignore those words, and then realized that of course in getting frustrated I might be guilty of ignoring those words myself. I’ve struggled with how to call out evil for what it is — as Jesus did — without getting into the judging business.

What I’ve never considered, in all this time, is what I just learned from Ted Lasso (and Walt Whitman) — that the opposite of judgment is curiosity.

That episode made me go back to the Gospels to check on how many of Jesus’ words end with question marks. Not counting rhetorical questions, here’s a partial list:

Who do you say that I am?

Do you want to get well?
Why are you so afraid?

Are you going to leave?

What is written in the Law? How do you read it?

Do you love me?

Maybe you can come up with others. Now, you might argue that Jesus already knew everything he needed to know, that the questions he asked were just set pieces designed to elicit a response. I don’t know that I agree with that — there are certainly at least a few events in the Gospels that seem to surprise him. But even if that’s so, two other things are as well. One: He still asked questions.

Because we aren’t, we need to ask questions. To people who haven’t come to the point of belief in Jesus, we need to ask who they think he is — and really be interested in the answer. Not so we can dismantle it and “prove” to them why they’re wrong to not believe, but so that we can understand where they are, and why. Maybe we need to ask if they believe, because maybe they do and we just haven’t seen it.

To a sister or brother in Christ who disagrees with us about something the Bible says, let’s remember that question, “How do you read it?” Again, not so we can slam them as heretics, but so we can begin to see their point of view and understand how they got there. Maybe we’ll learn from them. Maybe they’ll learn from us. Likely both. But neither can happen if we’re so set in our judgment that we lose our curiosity.

“Why are you afraid?” “Do you want to get well?” Those are questions that get to a person’s motivations and deepest hidden feelings. They’re much to be preferred over statements like “You can’t live in fear” or “Do what I tell you.” You ask those questions because you want to know why a person is where they are in their lives, what’s got them frozen or stumbling in the dark. Questions like those invite conversations and help us get to know one another better.

“Who touched me?” Questions like that one help us to uncover the people in our lives who brush up against us in the crowd — people we might easily overlook or pay little attention to. We need to be willing to look with curiosity into the eyes of the people around us, wondering who they really are, what makes them tick, and why they do and value and prioritize the things they do. Much of the time, what you’ll probably find is that they aren’t as strange or repulsive or evil or unpleasant as you may have thought at first glance. You might even begin to understand them and even, as Jesus did, to like them.

Oh, not always. But you won’t know if you aren’t curious, genuinely curious about them. One thing’s for sure: if you’re curious about them, you’ll begin to see them as people God loves. And who knows what might happen then?

Be curious, not judgmental. The next time you have an impulse to make a pronouncement, ask a question instead. It just might help you to see the speck in your brother’s eye and the plank in yours with greater clarity.