Cursed is the one who trusts in man, who draws strength from mere flesh and whose heart turns away from the LORD. That person will be like a bush in the wastelands; they will not see prosperity when it comes. They will dwell in the parched places  of the desert, in a salt  land where no one lives.

But blessed  is the one who trusts  in the LORD, whose confidence is in him. They will be like a tree planted by the water that sends out its roots by the stream. It does not fear when heat comes; its leaves are always green. It has no worries in a year of drought  and never fails to bear fruit.” 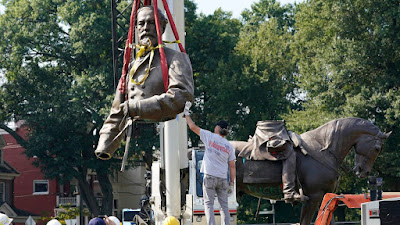 Growing up in a southern city near three Civil War battlefields, I lived with Confederate monuments all around. I remember vividly when I was a kid climbing on the cannons that (I guess?) marked gun emplacements on Lookout Mountain, Missionary Ridge, and Chickamauga battlefield. I recall statues too, though I didn’t pay nearly as much attention to those as a kid and couldn’t really tell you who they memorialized. (After I moved to Illinois, I did notice on a visit back to Chattanooga a monument honoring a company of Federal troops from Illinois that had served in Chattanooga, so maybe not all of the statues honored Confederate personnel.) There was a museum on Lookout Mountain that contained huge dioramas of the battles fought there; the museum was called The Confederama (the name has mercifully been changed to The Battles for Chattanooga Museum). I think my grandfather or someone once bought some imitation Confederate money and a gray military cap for me there.

I also grew up hearing the set of myths called “The Lost Cause” that did their best to redeem those fighting for the Confederacy. In this telling, the Civil War wasn’t really about slavery, but states’ rights. (I still remember my junior year history teacher, Miss Hodges, who was an amazing lady and usually on-the-money historian, insisting that slavery was just “the horse they rode into battle.”) Of course, the Lost Cause proponents never point out that of the states that seceded, exactly none of them listed any “states’ rights” issues other than slavery as their reason.

I read books from my school library about the great heroism and character of Thomas “Stonewall” Jackson and, especially, Robert E. Lee. Lee — or at least the character named Robert E. Lee portrayed in those books — was something of a hero of mine for a while, even. I’ve since learned, of course, that admiring Lee requires a person to ignore or explain away all kind of unsavory details about his life. He refused to honor his father-in-law’s wish that his slaves be released upon his death. He finally released them when forced to by the courts. He wrote that slavery in America, while not ideal, was better for Black people than their homes on the African continent had been and necessary for their improvement as a race.  And, in spite of his stated belief that Blacks were better off in slavery, he allowed and even encouraged — and may have committed himself — atrocities against them as a General and as a slaveowner.

For many reading this, of course — most, I would hope — the idea that we shouldn't honor a man or a group of people who fought against our nation for the stated purpose of opposing the institution of slavery will not seem too revolutionary.

Still — the impulse to honor our heroes is compelling, isn’t it?

Then it’s all the more horrifying when our heroes turn out to be, well, human. And sometimes, pretty awful humans.

How many movie and TV stars have we had to “cancel” in the last few years as we discover more about the mistakes they’ve made and the people they’ve been? And would that have been half as traumatic if we hadn’t glorified them for being attractive and entertaining in the first place?

Political figures get the hero treatment, too, though we’ve seen over and over where that can lead us.What if we could see our elected officials as just that — people we’ve chosen to work on our behalf? What if we stopped putting them on pedestals, literally and figuratively? Maybe we could see their successes and their mistakes with more perspective.

Sometimes church leaders undeservedly get the blame for our anger and disappointment, but just as often (at least) they unfairly get credit for a growing church or a thriving ministry. One after the other in recent years, we’ve seen booming churches led by outsized personalities come crashing down in scandal and corruption. But what if we could let go of the idea that our faith and the church’s health depends on any human being?

Jeremiah reminds us that when we trust in human beings — any human being — we have to live under the “curse” of spiritual malnutrition. Treating people — any person — unreservedly as a hero is asking to exist in a parched and barren world. The people we put on our pedestals, that we build memorials for and name buildings and highways after, are just people, after all. They will disappoint us sometimes. They will fail us. They will do wrong, and hero-worship will make us blind to the fact that they are fallible and that they aren’t always heroic, any more than we are. We’ll be left defending and excusing horrific behavior. It’s time to let go of the adolescent idolizing of celebrities, politicians, athletes, business leaders, and church leaders that’s rampant in our society.

The prophet reminds us that we already have someone in whom we can trust, and that he will never fail us. We’ll never be disappointed by his sins. He’ll never overlook us or ignore us. When we trust in him we’ll never be without nourishment. What we’re looking for when we turn wrongly to our “heroes,” God will give us generously and fully. We won’t have to fear the things that cause even our heroes to wilt and dry up.

As Christians, we have a hero who never sinned, who never failed, who never brutalized anyone and never used power to control and manipulate. In fact, he sacrificed his life for us. He’s the one in whom we ought to trust. He should replace all our other heroes on the pedestals we’ve erected for them.

That will free us up also to not hate our heroes when they do let us down. We’ll see that we all have feet of clay, that there are ways in which we all need to learn and grow, and that none of us get out of this world without wreaking some havoc. We’ll be able to forgive those who let us down, and hope and pray for recovery and repentance and redemption for them.

As Richmond, Virginia, removes a huge statue of Robert E. Lee that’s witnessed to the persistence of the Lost Cause myths for over a century, maybe we can all learn to tap the brakes on building monuments to human beings — on our streets, in our parks, on our mountainsides, and especially in our hearts. May the only monument we raise be the cross. May our hero be Jesus. May the world see only him when they look at us. May they hear only his name on our lips.

If he’s our hero, we will never fail to flourish.