Do not merely listen to the word, and so deceive yourselves. Do what it says. Anyone who listens to the word but does not do what it says is like someone who looks at his face in a mirror and, after looking at himself, goes away and immediately forgets what he looks like. But whoever looks intently into the perfect law that gives freedom, and continues in it—not forgetting what they have heard, but doing it—they will be blessed in what they do. 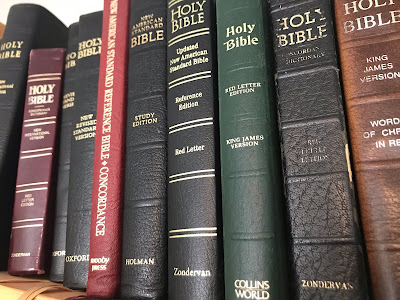 Every now and again, someone will ask me about Bible translations. Sometimes the question takes the form of which translation is the “best” (English translations — I’ve yet to have anyone ask me about translations into other languages!). Sometimes it’s more personal and immediate: someone is having trouble reading the translation they have and is wondering if there’s one that’s easier to read. Sometimes someone might ask questions like, “Why are there so many different Bibles?” (Usually because they’ve had the frustrating experience of trying to follow along in their own Bible with a reading in a class or worship service that comes from a different translation.) The confusion is understandable: there is a literal ton of English translations of the Bible available — even more so as digital reading of the Bible begins to outpace paper and binding books. Sometimes when people go to find a Bible to read, they don’t really pay attention to what “version” they have. (Usually, Bible publishers will call their translations “versions” — like the King James Version or the New International Version or what have you.)

So I think I’ll write a few posts about English Bible translations here. (I may also ask my colleagues Carlos Estrada and Paul Chae to write about Spanish and Korean translations.) A couple of caveats:

With that out of the way, on to it.

A former professor of mine, Klyne Snodgrass, has this to say regarding translations of the Bible:

“Reading the Bible in English is like kissing your wife through a screen. You can't feel the full power of God unless you read the Bible in the original language[s].”

Dr. Snodgrass was not trying to get us to throw away our English Bibles. The point he was making was actually a very simple one: When you read the Bible in English, you aren’t actually reading the Bible. The Bible was written over the space of (conservatively) 300 years. Some of the Old Testament dates back much further than that in oral or written form. The last word of it was written (conservatively) over 1,900 years ago, 500 years or so before there was a language that even remotely resembled our English. Dr. Snodgrass was reminding us in his kissing-through-a-screen analogy that, while English translations of the Bible are important, necessary, and a great blessing, they are translations. None of them can be said to be inspired by God in the way that the original texts of the Bible were.

No one who has ever tried to translate the Bible has been completely faithful to the text. If it was even possible, doing so would give us a jumble of words that would leave us all bewildered and frustrated. Which wouldn’t be faithful to a text that intends to be understood. Even the most “literal” of translations takes some liberties and has to make decisions about which meaning of particular words the author most likely intended. For instance: Is it better to translate, in Matthew 10:22, “for my name’s sake” or, less literally but maybe more understandably, “because of me” or even “because you are my followers”? Is it better to translate in 1 Peter 1:13, “gird up the loins of your mind,” and risk misunderstanding, or to translate by using a more understandable (but technically less accurate) English phrase like “prepare your minds for action”? What you would choose in each case, and why you would choose it, is the real work behind Bible translation.

This is why translation of the Bible is like kissing your spouse through a screen: it might be something like a real kiss, it might even be kind of nice if it’s the best you can do, but it’s nothing like doing it without that screen between you. You’d do it if you had to. But you’d rather have full contact.

Maybe we’d be all better off if all English Bibles had to be sold with a sticker that said something like,  “Warning: This isn’t actually The Bible. It’s a translation. Reader discretion is advised.”

Of course, unless we’re going to take enough Greek, Hebrew, and Aramaic classes that we become as fluent in those languages as we are in English, we’ll still want to read our English translations. But even if you do become fluent, you’ve just kicked the can down the road because even reconstructing the “original” text of the Bible is an ongoing process. We have no actual original manuscripts of any part of the Bible. What we have is thousands of copies of copies of copies — most in bits and pieces — that experts have to painstakingly compare and reconstruct.

So we need to approach this question of translation with more than a little humility. Read your Bible in whatever translation you choose. Recommend it to others. But don’t fight with others about their choice of translation, and don’t get too proud of the one you like.

Please remember: God’s blessing isn’t promised to those who merely listen to the word, but to those who do what it says. Questions of translation - of how we listen - are secondary to questions of obedience. “What do we do with what we hear?”, this is by far the more important question facing believers. Every translation of the Bible succeeds or fails at the point of communicating Scripture to human beings. Every human being succeeds or fails at the point of putting Scripture into practice in our lives.

So the next few posts will deal with some strengths and problems of well-known and popular English translations. I may even include a few less popular ones that you might want to know about.

The Spirit of the God whose words come to us through the pages of the Bible lives in us. May we know him without any kind of screen between us. And may he help us to be doers of his word.