I planted the seed,  Apollos watered it, but God has been making it grow. 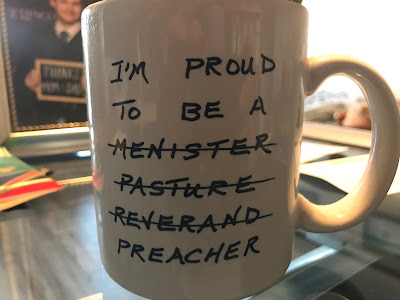 I’ve had a coffee cup sitting on my desk for 30 years or so now. I don’t much drink coffee, but I like the cup, so it’s full of pencils and pens. I can’t remember exactly where it came from, but scrawled on the side in blue are these words:

I’M PROUD TO BE A  MENISTER  PASTURE  REVERAND  PREACHER

I guess the joke is that for a guy like me, who can’t even spell those other titles, PREACHER is just fine.

In my own little neck of the Christian woods, Preacher and Minister are used much more than Pastor or Reverend. (I didn’t even have to look up the spelling!) The gist of the argument has been that Reverend isn’t a biblical title and Pastor applies to elders, though I think the main point of it is to differentiate ourselves from groups that use those titles for their clergy.

There’s another one that we do use sometimes that I’ve never intentionally applied to myself: Evangelist.

While in the New Testament evangelist just means “one who announces good news,” in our world it means…something else. It calls to mind bad suits and blow-dried hair and smarmy appeals for money in the name of Jesus. It makes people think of someone trying to sell the faith like a used car with too many miles on it. “Evangelist” is what those guys who roam the country selling miraculous cures call themselves. It's also the title worn by the perpetrators of some of the best-known church scandals of the last 50 years. I do believe that Christians should be all about announcing the good news of Jesus. But that word just doesn’t communicate anything good outside of the church.

Even the word “evangelism” has been tainted by it. While in church we still think of that word in a positive sense, I can assure you that no one outside the church thinks of it that way at all. The vast majority of the non-Christian world would consider evangelism manipulative. (And sometimes it has been.) I think the attitude of most of our non-Christian friends and neighbors about being “evangelized” (ugh) is summed up by a quote attributed to George Carlin: “Religion is like a pair of shoes.....Find one that fits for you, but don't make me wear your shoes.” Trust me, if the shoe was on the other foot you’d feel the same way.

Here’s a secret, though; in my experience, most of us who are Christians don’t like the idea of evangelism either. It leaves a bad taste in our mouths. It does feel manipulative. It borders on coercion. And it can bring us into conflict with friends, family members, people with whom we have to work. Sometimes we’re made to feel guilty about it — we love people more than we love God, we don’t care about the lost, we don’t really believe in the gospel. But the fact remains that most of us don’t like “evangelism” and therefore don’t do it.

Doesn’t it feel good to admit that?

Listen, I don't think it’s a bad thing to want to avoid conflicts in the name of Jesus! What good does it do to have fights with people about the gospel? What good does it do to win an argument with your dizzying intellect and comprehensive Bible knowledge if the only thing your “target” takes away from the encounter is that Jesus makes people into jerks? Some of us derive far too much satisfaction from people disliking us, thinking that it’s persecution because of Jesus when it’s really just that you haven’t been very likable.

“But the gospel’s too important to worry about peoples’ feelings,” you say.

Exactly. It is important. Which is exactly why you should worry about their feelings.

Still — we have that nagging sense, don’t we, that the gospel should be shared? We still believe that as Christians we should tell others about Jesus, even if we know more about how we don’t want to do it than how we should.

I had a conversation with someone just this week, in fact, about that very thing. So maybe, in slightly adapted form, what I said to this person might be helpful to you, a person who believes equally that the gospel should be shared and that the way the church has often gone about it has been counterproductive.

First of all, it seems to me that, as in most things, how you listen is more important than exactly what you say. I think that it’s often best to begin conversations about faith by asking a person what he thinks about God, Jesus, church, etc. Sometimes we’re in a hurry to talk about what we believe, but finding out what the other person’s beliefs are will often open doors to further conversations that leading with your own beliefs will slam shut. And not with an agenda; don’t ask if the only reason you care about the answer is as leverage to get them to come to faith.

Sometimes something like “Did you grow up going to church?” can start some discussions, especially in the right context, like maybe you’ve just mentioned something happening at church, or talking with someone from church. That can also be something people don’t want to talk about, though, depending on their experience.

Or if that seems too deep too fast, you could just ask them if they want to come to church with you. That’s just a “yes” or a “no,” and maybe a little easier than jumping right into a deep conversation about faith and stuff like that. It can also lead to more, at their pace. A lot of times they’ll ask “What kind of church is it?” That gives you the chance to say more, and you can be as specific or general as you want. (My next post will be about being a visitor-friendly church.)

I’d also want to emphasize that the context of their lives makes a difference in how you approach them. The gospel is more than just, “You’re a sinner, and Jesus died for your sins. Now admit you’re a terrible person so Jesus can save you!” Sometimes people are feeling like terrible people, and the gospel can be very good news to them. But there’s so much more to it. Know what people are going through: illness, grief, depression, work problems, family issues, or what have you. Then you can talk to them about how your faith has helped you in times like those.

But, listen, please — none of this should be read as strategy. Paul reminded the church in Thessalonica that he didn’t share the gospel with them from “impure motives”; “nor are we trying to trick you,” he assures them. People to whom you would tell the gospel story are human beings, and the gospel doesn’t need our embellishment. I’ve been guilty before of treating people more like sales prospects that human beings. Don’t make that mistake. Listen and ask questions because you care. Hear what’s being said. Then ask God to give you words that will lift up Jesus and communicate the good news free of prejudice — even your own.

Finally, I’d want to remind you of this; God is involved in this process. Sure, he’ll use your words — but he’ll also help you know what to say. Maybe you’ll be the one to plant the seed of the gospel in the corner of a person’s heart. Maybe you’ll water it. But if and when it takes root and germinates — well, that’s God.

Just be a preacher. Just be one who tells the good  news of Jesus as only you can, when you can.

That will be more than enough.