Later, knowing that everything had now been finished, and so that Scripture would be fulfilled, Jesus said, “I am thirsty.” A jar of wine vinegar was there, so they soaked a sponge in it, put the sponge on a stalk of the hyssop plant, and lifted it to Jesus’ lips. When he had received the drink, Jesus said, “It is finished.” With that, he bowed his head and gave up his spirit. 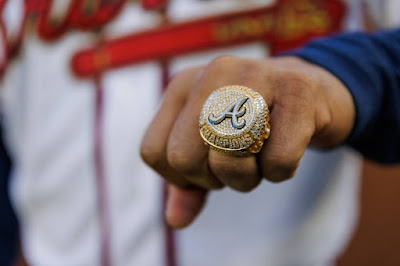 Atlanta’s Major League Baseball team won the World Series last year. As a lifelong Atlanta fan, having endured four World Series losses in the 90s, I was taking nothing for granted. Yes, they had a 3-2 lead in the Series. Yes, the score in Game 6 was 7-0 with two out in the ninth. But until Dansby Swanson fielded a grounder hit by Yuli Gurriel and threw to Freddy Freeman to end the game, as far as I was concerned the outcome was still in doubt.

The players, coaches, and other personnel received their World Series Rings last week. They’re ridiculously massive and elaborate, with 755  diamonds, 19 rubies, a white pearl, and a flip-up top that hides a replica of Truist Park, their home stadium, complete with micro-LED lights. Not something you’d wear to the grocery store — or probably anywhere else, for that matter. For symbolic value, though, they’re pretty effective. They’re visible tokens that the team accomplished what they wanted to accomplish. They’re reminders to everyone who sees them that this group of players were able to finish what they started.

I’m writing this on the night before Good Friday. At first blush, Good Friday sounds like a stupid thing to call the day on which many Christians reflect on Jesus’ death. “Good,” in this case, doesn’t mean positive, excellent, or something to be desired. It means “holy,” “pious.” It’s Good Friday because Jesus’ suffering was a holy thing that completed the work of God in redeeming human beings from sin and death.

Not all Christians place a lot of significance on Good Friday as a day of remembrance. I grew up in a stream of the Christian faith that most surely did not. At the church I’m a part of now, there won’t be a Good Friday service — though I know it means something to at least some of the people I gather with each Sunday for worship and communion. I’m not too concerned, to be honest, that Good Friday be observed as a day that’s holy or special in some way. Jesus’ crucifixion should be significant to us all year long — though I know that for those who set aside Good Friday, Jesus’ crucifixion is no less significant the rest of the year.

Often, one of the things churches do to commemorate Good Friday is to focus attention on Jesus’ words from the cross. And, of those words, today three stand out for me. One sentence: “It is finished.”

I think you can take those words in a few different possible ways. I mean, Jesus might be saying, with a sigh of relief, “My suffering is over.” And who would blame him? The agony he was in — physically, emotionally, spiritually — it would make most anyone look forward to the end of it.

There again, Jesus might be saying, “Their cruelty is complete. Their sin has reached its full capacity.” He wouldn’t be wrong. Judas’ betrayal, the injustice of rigged trials and bought witnesses, the violence and shame of his scourging, and the horror of crucifixion — it sure seemed like a lot of people were working overtime to do evil as events moved inexorably toward his execution.

Or it might be that Jesus is saying, “the Scriptures are fulfilled.” That certainly seems to be on his mind here. Johns suggests that’s the reason he says he’s thirsty, in order to bring about the “fulfillment” of Psalms 22 and 69. I would affirm that Jesus’ crucifixion does “fulfill” Scripture, so it’s easy to imagine that might have been on his mind.

Jesus might mean all of those things, to some degree. But I think he means more. Whatever you might understand him to be saying in the moment, when I read those words I don’t imagine that he intended them with relief or resignation, or even that he intended them to affirm his death as the fulfillment of the words of the Old Testament. He was no doubt relieved by the end of his suffering, and he certainly experienced the full capacity of human cruelty and injustice, and he never wavered in the conviction that Scripture showed how God’s intention to save human beings came to fruition in his death. But I don't think any of that is primarily what he meant when he said, “It is finished.”

Jesus said that he came to give his life as a ransom for many. Paul wrote that God demonstrated his love for us “in this: while we were still sinners, Christ died for us.” He said that Christ “died for our sins according the Scriptures,” and that was something to be passed on “as of first importance.” When Jesus said those words, “It is finished,” what he meant was he had completed the work God had given him to do, the work of demonstrating the extent of God’s love for us, the work of ransoming us from the slavery of sin and death.

At his worst moment, Jesus was celebrating that all the suffering and sorrow and rejection and shame had the purpose of redeeming the human race. That God’s work was finished, just like it was finished after six days of Creation. That, as the writer of Hebrews puts it, in the new creation that Christ’s sacrifice has brought to completion, “there remains, then, a Sabbath-rest for the people of God.”

There is so little in my life that ever feels finished. I certainly have times that I can rest for a while, but I can’t name too many things each that are finally, completely, and forever put to bed. I bet you can relate to that. Even in Atlanta, a new baseball season has started, a new quest for a championship. That’s what being human is, I think. As long as we’re alive, we’re always striving. Always trying to finish the next thing on our lists.

But what I think we’re supposed to see here on Good Friday is that one thing is complete. One thing is finished. Jesus has sacrificed himself for us. When he said “It is finished,” he meant that nothing else is needed, that it had all been done. God’s ages-long work of salvation, put into action before there was such a thing as time, had finally been accomplished. In Jesus, we are redeemed. In Jesus, we are set free.

I think that matters. It makes a difference as to how we think about ourselves. We’re not placed here to save ourselves, to work through levels of enlightenment or balance the scales of justice or discover the magic formula of good deeds and repentance to prop open the door to heaven. We’re placed here as a witness to the glory of God’s grace and love as seen through Jesus. We’re placed here to testify and celebrate that in Jesus our salvation is accomplished, that while we were still sinners Christ died for us.

But that conviction that in Jesus God’s act of salvation is finished also makes a difference in what we think of those around us. We can show to others the grace that we’ve received, knowing that through Jesus God’s work is finished for them, too. We can help them to accept it in joy and freedom.

“It is finished.” That’s the hope we have. We aren’t saved because we accomplished anything: not doctrinal purity, not character, not Bible knowledge, not steps of salvation — nothing we can take credit for. We’re saved because of what Jesus accomplished. May we receive it with humility, and may we celebrate with gratitude.

And may we be tokens, shining in the light of Christ for the world to see, that God’s work is finished.