Who Jesus went through all the towns and villages, teaching in their synagogues, proclaiming the good news of the kingdom and healing every disease and sickness. When he saw the crowds, he had compassion on them, because they were harassed and helpless, like sheep without a shepherd. Then he said to his disciples, “The harvest is plentiful but the workers are few. Ask the Lord of the harvest, therefore, to send out workers into his harvest field.” 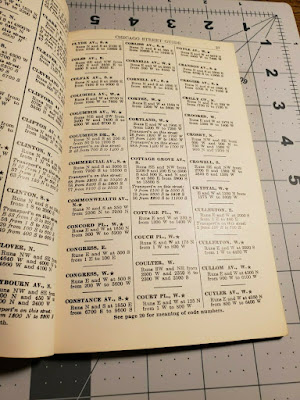 A lot of people think that Chicago, where I live, must be very easy to get lost in. I suppose it can be: there are over 2800 streets within the city’s 234 square miles. Drop someone who doesn’t know Chicago at, say, The Museum of Science and Industry with no way to navigate and ask them to find Wrigley Field, and they’d likely have a pretty hard time.

I was talking to a friend a couple of weeks ago who has just moved to Chicago. He knows how to get to work, to church, and a few other places, but other than that is somewhat bewildered at the idea of finding his way around. Obviously, I’ve been in Chicago a lot longer than he has. But I also have one other advantage.

When I first came to the city, my father-in-law, who moved to Chicago in the mid- 1950’s, gave me a little pocket-sized paperback book called The Chicago Street Guide. The guide, as its name suggests, lists every street in the city, its direction (north-south or east-west), and its location north, south, east, or west. (Of course, it’s available online now.)

And he also gave me the key to understanding the street guide: every address number in Chicago tells you how far that address is from the intersection of State Street and Madison Avenue. State is 0 east and west. Madison is 0 north and south. Once you learn some major streets, it becomes much easier to navigate.

For instance: Wrigley Field is on Addison Street, which is 3600 north (36 blocks north of Madison). Wrigley Field’s address, 1060 West Addison, tells someone who knows Chicago that Wrigley is at the corner of Addison and Clark Street (which is 10 blocks west of State). My church’s address, 4602 N. Kilbourn Avenue, is at the corner of Kilbourn (4500 west) and Wilson Avenue (4600 north). If you want to catch a Cubs game Sunday after church, you need to go 10 blocks south and 35 blocks east. Since there are (usually) 8 blocks in every mile, I can even tell you that the ballpark is about 5 miles from the church.

Now, of course, you can just navigate with your phone. But what a phone won’t do — at least not so far — is teach you to understand what Chicago addresses actually mean and how to navigate the grid on your own. Understand Chicago’s grid, and you can never really be lost in the city, because you’re never more than a street number away from knowing exactly where you are.

Lost. That’s a word we use metaphorically in church a lot. Jesus told three famous parables about a lost sheep, a lost coin, and a lost son, and the joy that comes when they're found. Those parables were meant to shed light on Jesus’ mission, which he referred to more pointedly when he said he “came to seek and save the lost.” That comes from Psalm 119, Jeremiah, Ezekiel, and Zechariah, all of which picture people who should be living in peace and safety with God being lost, scattered, and in danger.

It’s a word that, in the 18th and 19th century revival traditions of church, came to mean “lost in sin,” people who are doomed to hell for eternity if they don’t come down the aisle to “be saved.” That understanding of being lost, in turn, contributed to the idea that “lost” people are morally and spiritually inferior to “saved” people, and that they must be either converted or shunned.

But I want to point something out; as Jesus and the prophets use the term, being lost isn’t primarily about a person’s eternal destiny. Nowhere does the Bible add the prepositional phrase “in sin” to the word, “lost”. The sheep and the coin aren’t responsible for being lost. The son is, but the sins mentioned in the story are treated as sort of the inevitable result of his walking away from his father’s house, and the father forgives them with a wave of his hand when the son comes home.

In the prophets, the only sin explicitly connected to “lost sheep” is the neglect of those whose job it was to care for them and look after them. That’s why Jesus pictures himself as coming to look for and rescue the lost; he will be faithful to his calling where others had been faithless. He had compassion for those who were lost. The lost people he came for weren’t bad folks who were going to get what they deserved if they didn’t straighten up and fly right, but people who were “harassed and helpless, like sheep without a shepherd.” They might have been sinners, but in Jesus’ eyes that didn’t make them too different from anyone else. The difference was that they didn’t know there was a path back to safety for them. Jesus came to show them that path. To be that path.

So I think we need to ask ourselves, very seriously: Who are the harassed, helpless people in our lives?

And are they finding compassion and grace and help at our churches?

Obviously, the poor are harassed and helpless. Poverty touches every other part of life, makes everything more difficult. Kids who don’t get enough food to eat can’t do as well in school. Parents without reliable transportation are more limited in their employment options. Poverty restricts access to good medical care. It sets people behind technologically.

Immigrants, who often also deal with poverty, are harassed and helpless. They may not be able to read and write English. Their kids may struggle to catch up in school. They, too, struggle to find medical care or legal representation when necessary. Their educational opportunities may be limited. And, of course, they often deal with the prejudice and distrust of the majority culture.

Point is, we need to follow Jesus in recognizing that those who are lost are not necessarily lost strictly because they’ve chosen to be irreligious or immoral. They’re harassed and helpless and what they need is for someone to come and find them and help them and bring them to safety. Jesus, of course, will. But he often sends us out looking as his representatives.

Through us, Jesus wants to seek and save the lost. May we have our eyes and ears open. May we have the vision to see those harassed helpless people all around us who are lost, and may we have the compassion to care that they are and offer them love, grace, help, and hope. What we have to share with the lost isn’t moral superiority, but a way to make sense of life, navigate its twists and turns, and a community in which we can do so together. The Way. Jesus.

Show harassed, helpless, lost people The Way. Help them find their way back to him.