Who is like you—majestic in holiness,
awesome in glory,
working wonders? 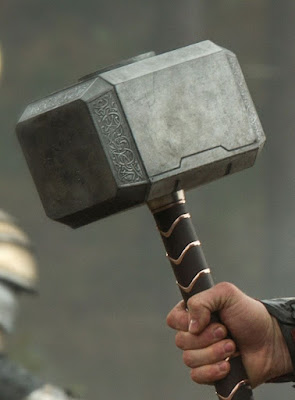 I came across a post not too long ago with a provocative title: "Thor Is Beating the Lutheran Church in a Battle for Believers in the Land of Fire and Ice". The post describes the resurgence of paganism in Iceland, in the form of Ásatrú, a “spiritual movement” that honors the old Norse gods: Odin, Freya, Loki, Frigg, Vár — and, yes, Thor.

If you think it’s not a coincidence that a new interest in Norse pagan gods has arisen in the decade when the Marvel Cinematic Universe started depicting its versions of Thor, Loki, Odin, and Freya in blockbuster films — well, I probably wouldn’t try to argue with you. But Ásatrú as a movement goes back to the early 1970s. There’s some pretty interesting stuff in the post on the history of Christianity in Iceland — an Ásatrú priestess, Jóhanna Harðardóttir, is quoted as saying that Iceland is “still Christian in name only.” I can’t really speak to her view of the history of the Icelandic church, but the numbers are fairly straightforward: while the percentage of the population of Iceland that claim membership in the country’s largest denomination, the Evangelical Lutheran Church of Iceland, dropped from 90 to 64 percent in about 30 years, Ásatrú membership tripled in size from 2007 to 2017. There are plans to build an Ásatrú temple near downtown Reykjavik.

Interestingly, Ásatrú does not proselytize. Jóhanna Harðardóttir says, “We gain every year, but it’s not because we are trying. People come to our ceremonials and ask, ‘Why didn’t I know about this before?’”

I think there are some pretty clear reasons why Ásatrú is growing. (Other than the movie connections.) For one thing, we live in a world now in which institutions, especially institutions that have been around for a thousand years are more, are being questioned. A decade or two ago, it was easy to see that people weren’t very interested any longer in defending or remaining a part of a particular Christian denomination. Now, that lack of institutional loyalty has spread beyond denominational lines to the church in general. People are less likely to see the church as a positive force in society.

Ásatrú is a relatively new movement, and careful not to call itself a religion, or even invite people to join anything. People interested in Ásatrú can take their pick of any number of gods. Harðardóttir says, “There are so many. When you’re in love, it’s good to have Freya. When you’re sick, you want Eir around. Harðardóttir drives a red Nissan that displays a “Protected by Thor” bumper sticker. Faced with the possible death of a grandchild, she says, “Thor got me through it.” But she goes on to explain, “I don’t believe in a God in the sky we pray to, but I believe in him.” Ásatrú, she says, is less a religion and “more like a lifestyle, living in peace with yourself and the surroundings.”

In short, Ásatrú answers well the doubt many people feel about institutions like the church, while still offering the opportunity for divine assistance. But, of course, on their terms. You can choose your god, and that choice can even be situational. There is no concept that’s analogous to sin in Ásatrú — meaning actions or inactions that are objectively wrong, as defined by God. Adherents are taught to do “what’s good for you and others.” “I don’t make rules for other people,” Harðardóttir says. “I trust they know what’s best.”

Another reason for Ásatrú’s popularity seems to be that it’s perceived as truer to the national identity of Iceland. Christianity, according to Harðardóttir, was sort of pushed on the country a thousand years ago for economic reasons. But the old Norse gods were worshipped in Iceland long before that. (Unaddressed in the post is the fact that the worship of those gods was introduced by Viking invaders.) To embrace Ásatrú, the thinking goes, is to be more truly Icelandic.

The same things that are contributing to the rise of Ásatrú in Iceland can be seen in America in the increase of people who say they are “spiritual, but not religious.” Institutional distrust. More freedom to build a personal spirituality. Less concern with a god who intervenes in human affairs — “a God who was constantly spying on you,” as Harðardóttir dismissively says of Christian teaching — which also makes less of a demand on people. A simplifying of ethical and moral imperatives to “living in peace.” And an appeal to indigenous religion — or, at least, religion that wasn’t forced on people by by forces outside their control.

Something occurred to me, seeing Ásatrú and Christianity juxtaposed in such contrasting terms: The church has not done a good job in communicating what Christianity is.

Admittedly, some of the critiques in the post are unfair. They obviously aren’t purely objective. Still, you hear it enough and you have to start wondering if maybe, somehow, we haven’t communicated the hope of the gospel, the love of God, and what it really means to follow Jesus.

Christianity was never supposed to be what many people in our world are under the impression that it is.

Christianity is spiritual. One of its central doctrines is that Jesus has poured out the Holy Spirit, shared God’s Spirit with everyone who believes in him. We’re filled by the Spirit. The Spirit should be bearing the fruit of love, joy, peace, patience, kindness, goodness, faithfulness, gentleness, and self-control in our lives.

While there are moral and ethical imperatives Christians are expected to follow, it isn’t about God spying on us. The central belief of Christianity is that God forgives sin through Jesus. The angry, pedantic, malicious God that many people, like Harðardóttir, seem to think is watching us from on high looking to find fault has actually come near to us in Jesus, identified with us totally, and taken on our sins and suffering. He protects us and gets us through. The things God asks us to do and not to do are summed up by Jesus as “Love the Lord your God with all your heart and with all your soul and with all your mind” and “Love your neighbor as yourself.” He even said, in a teaching that Ásatrú adherents can surely appreciate, “Do unto others as you would have them do unto you.”

And, of course, Christianity was never supposed to be an institution. Institutions are all about defending, sustaining, and propagating themselves. What we’re supposed to be is a community of Jesus-followers, more like a movement than a religion, quite willing to give ourselves up if it means Jesus is believed. When we share the gospel, it must be in ways that respect and love and uphold the good in the people with whom we share it. We must help people recognize the ways God is working in the world as they see it, not force them to see the world the way we do.

It strikes me that all of the things about Ásatrú that Jóhanna Harðardóttir and other Icelanders find engaging are things that the gospel offers, too. If only we can cut out the background noise enough for our world to hear its thunder again.

Even the god of thunder would bow down before that.