Easter Among the Relics 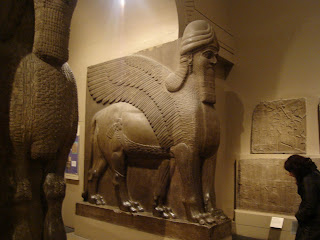 Jesus of Nazareth was a man accredited by God to you by miracles, wonders and signs, which God did among you through him, as you yourselves know. This man was handed over to you by God’s deliberate plan and foreknowledge; and you, with the help of wicked men, put him to death by nailing him to the cross. But God raised him from the dead, freeing him from the agony of death, because it was impossible for death to keep its hold on him. (Acts 2:22-24)

Irony of ironies. I spent Good Friday among the relics of societies long dead and buried. Dead, buried, and uncovered, in fact.

I went with Josh, my 11-year-old son, to a Chicago museum that specializes in the Ancient Near East; cultures like the Assyrians, Egyptians, Babylonians, and so forth. It’s a pretty spectacular museum, really, full of relics dug out of the desert sand: monuments and tablets and jewelry and pottery. And tombs. Lots of tombs. It was the tombs that really struck me, I guess because of the time of year that we’re in. Good Friday, leading up to Easter, tends to make me think a little more about death and life. Mortality and immortality. I guess it’s bad form to collapse Good Friday into Easter Sunday, but it’s not like we don’t know how the story ends, right? So if at one time in my life I might have been guilty of over-emphasizing the cross at the expense of the empty tomb, please forgive me if now I tend toward the opposite extreme.

Actually, I don’t want to overlook either, and so I try to think of them together now. Jesus’ death and resurrection are part of the same event, elements of the same story. “God was reconciling the world to himself in Christ,” as Paul put it (2 Corinthians 5:19). Without resurrection, his death would simply be one more example of the way the powers of the world silence revolutionaries, one more example of a creation too broken to recognize its Creator walking in it. Without his death, it couldn’t be said that Jesus had truly confronted what was wrong with creation in the first place. But in the incarnation, and in Jesus’ suffering, death, and resurrection, God restored a creation enslaved to sin, decay, futility, and death.

Exactly what that enslavement is, the many forms that it takes, comes home in vivid detail in a museum like the one we visited Friday. We could start, I suppose, with the artifacts, like the broken pottery, the jewelry, the weapons and tools used millennia ago by people who are all but forgotten. Oh, and the monuments: gigantic things, some of them. Fifteen, twenty feet tall. The kings who commissioned them, the sculptors who created them – I’m sure they imagined their work would stand forever, their lives or their skill immortalized in stone. But instead of standing majestic watch over unending kingdoms, they were dug out of the sand in pieces to stand behind velvet ropes or acrylic.

Neither, of course, did the kingdoms those monuments commemorated stand forever. (Who can trace their Hittite heritage? Anyone? Who can read Sumerian cuneiform?) History is filled with the rising and falling of empires, empires that at their zeniths ruled the known world. But only until the next empire rises, motivated to conquest by the need to provide for their citizens – or maybe just the will to power. Sin. Decay. Futility. Death.

Most vivid are the tombs, of course. The one that’s really on my mind is an ancient Egyptian burial that dates from before mummification. It’s a circular hole, into which a woman has been dumped. The skeleton lies on its side in a fetal position, testimony to the enslavement of creation. The mummies are no better, of course: the careful embalming, the wrappings, the treasure buried with them in the huge pyramids, all of it is just a pitifully-disguised attempt to deny death. Even those tombs were forgotten until someone coaxed the desert into giving them up.

You go away from a museum like that thinking about what the implements and gadgets we so value are really worth. You go away wondering how long our greatest monuments will last. You wonder when the empires we build will crumble, and what will replace them. And you go away realizing that expensive funerals and beautiful caskets and lovely eulogies will not change the fact that one day all of us will stop living and moving and working and playing in this existence we’ve come to regard as life.

I think we often take the wrong message home from museums. We want to marvel at human achievement, but maybe it’s better if we walk away recognizing its futility.

That’s when were ready to hear Easter proclaimed over the ruins of God’s good creation.

“God raised him from the dead,” Peter proclaimed fearlessly at Pentecost. Human scheming didn’t win out. Human wickedness and violence only seemed to triumph. God snatched his Son from death’s grasp, and in doing so announced a new creation. This one, however, will not be enslaved to sin, decay, futility, or death. Our monuments crumble and disintegrate. But the cross and the empty tomb remain to proclaim that in Jesus there is hope, and life, and joy, and purpose. “If anyone is in Christ, the new creation has come: The old has gone, the new is here!”

That’s the message of Easter, the message of the gospel: that, in Christ, God has stepped into this world of sin, decay, futility, and death – the world our museums put on display – and right under our noses has begun anew. Sin is forgiven. Decay is transformed into prosperity. Our best efforts to plan and build and accomplish, once rendered futile by sin and death, are given purpose and meaning. And death, the last enemy, becomes life and immortality.

Oh, sure, you could say that’s nothing more than window-dressing either, as transparent as anything the ancient cultures did to make sense of death. You could say that, except for one thing: his tomb was empty. A new day has dawned. New creation is upon us.

And, like God’s creation was always meant to be, it is good.