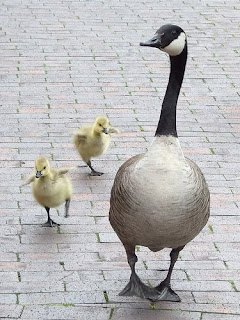 When Jesus saw the crowd around him, he gave orders to cross to the other side of the lake. Then a teacher of the law came to him and said, “Teacher, I will follow you wherever you go.”
Jesus replied, “Foxes have holes and birds have nests, but the Son of Man has no place to lay his head.”
Another disciple said to him, “Lord, first let me go and bury my father.”
But Jesus told him, “Follow me, and let the dead bury their own dead.” (Matthew 8:18-22)


Do you Twitter? Would you admit it if you did? Do you have any idea what Twittering is?

What about Ashton Kutcher? Have you heard of him? If you think “Ashton Kutcher” sounds like a British luxury car, then you should know that he’s actually an actor, famous for his roles on That 70’s Show and Punk’d. Ashton is also a user of Twitter, which is an online social networking site that allows subscribers to post frequent 140-character answers (“tweets”) to the question “What are you doing right now?” Other users can sign up to be a “follower” of your tweets – whenever you type, “ My coffee’s cold” or “I feel like I may be coming down with something” or “Someone help me get off this site and get some work done”, it shows up on all of your followers’ Twitter pages.

I bring all this up because this week Ashton Kutcher became the first Twitter user to gain over a million followers. Yes, the guy who starred in The Butterfly Effect and Dude, Where’s My Car? has a million people who just have to know what Ashton is doing right now. It’s especially newsworthy because Ashton’s closest competition in getting to the million-follower mark came from CNN.

What interests me about this story is that word “follower.” It’s used on Twitter to mean, simply enough, someone who follows someone else’s tweets. But the word makes me think of how most of the people who read this (like the one writing it) claim to be followers of Jesus.

Part of following him, of course, is listening to what he says. I’m wondering, now: if Jesus was on Twitter, what would he write? (WWJT: “What Would Jesus Tweet?”) And who would follow him, in the Twitter sense? And who would follow him in the Christian sense? You don’t need me to tell you, of course, that following Jesus isn’t just about keeping tabs on the interesting things he talks about. Following him means trying to allow what he says to determine the norms by which we live.

You see it, don’t you, in that scene Matthew paints? There’s Jesus, in the middle of a crowd. Hundreds, maybe, have shown up because they’ve heard that Jesus heals the sick. They reach out dirty hands, cry out from hoarse throats, turn blind eyes and deaf ears toward him. And – note this well – Jesus doesn’t mind. He drives out evil spirits and heals diseases, conscious that God has always done things like that and knowing that some will recognize in his healing that God’s kingdom has burst in on an unsuspecting world.

But this is “the crowd.” It’s a mob scene, a small-scale riot. And that’s not all Jesus is about.

So, eventually, he calls his followers. These guys are pretty clueless, you understand. They don’t yet know exactly what they’ve blundered into. But Jesus has called them to follow him, to “fish for people,” and despite not having the foggiest notion what that’s going to mean, they follow him. Literally. They put away their livelihood, their jobs, their families, and they quite literally follow Jesus wherever he goes. As they follow, they pay attention. They hear. They ask questions. They make mistakes. They learn.

Jesus and these followers cross the lake to put some distance between themselves and the crowd. The crowd, presumably, disperses. They go back to their homes, back to their lives – no doubt thankful for the way Jesus has touched them, no doubt wondering about him, but not followers. Not really.

A few try, to their credit. “I’ll follow you wherever you go,” says one, and Jesus shoots a hole in his balloon: “I don’t know where I’m going to sleep tonight – sure you want to get mixed up with me?” Another promises to follow him as soon as his dad’s funeral’s over, and Jesus shockingly shuts him down, too: “Follow me, and let the dead bury their own dead.” “I’m in the business of new life,” he seems to be saying, “and anyone who wastes any time mucking around in that old life doesn’t yet quite grasp what following me means.”

I don’t know sometimes if we’re any different.

We claim to follow him, but we don’t seem to take him very seriously. (“Sell your possessions and give to the poor”? Anyone?) I wonder if we’re not sometimes a lot like that crowd clustered around him, receiving the grace he gives and genuinely surprised when he starts speaking in terms of real discipleship, lightweight Jesus-groupies who love to hear about him and talk about him and feel good about ourselves, but who haven’t much of a clue what following him really is.

Following him is going out with him to fish for people. It’s ministering to the sick, the poor, the homeless, the HIV-positive, the imprisoned, the sinners. When we follow him, we go where he goes: so when he leads us out of our church buildings, out of our comfortable homes and neighborhoods, and invites us to stretch ourselves past the point where it hurts, we do it. We follow when it means we don’t have a place to lay our heads; we raise our heads from lives crowded with death and decay and we follow in his footsteps, doing by his power and in his name the very things he did, proclaiming as he did that the kingdom of God is near.

Twitter makes following so easy, so convenient. Jesus doesn’t. But once you hear his call you won’t be content doing anything else.

Maybe that’s why you’re discontent, if you are. Maybe you’re feeling intuitively that you can’t follow Jesus from behind a desk, or in the pages of a book, or even from a church pew. You have to separate from the crowd and go across the lake with him, no matter the storms you face on the way. That’s what it is to answer his call. That’s what it is to be a follower.

So...What are you doing right now?