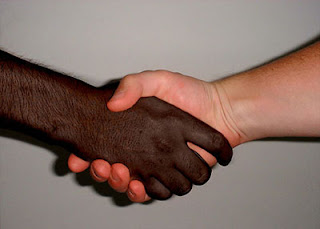 To this you were called, because Christ suffered for you, leaving you an example, that you should follow in his steps.   “He committed no sin, and no deceit was found in his mouth.” When they hurled their insults at him, he did not retaliate; when he suffered, he made no threats. Instead, he entrusted himself to him who judges justly. (1 Peter 2:21-23)


Thursday, President Obama had a beer at the White House with two guys from Cambridge, Massachusetts. Of course, if you've kept up with the news lately you're probably aware of this. You might even have read which brands each chose.

The Beer Summit, as it's being called, was the President's idea, apparently, to try to turn an ugly incident in Cambridge into a “teachable moment.” You probably know the story by now. Henry Gates, a prominent Harvard professor who happens to be African-American, returns home from a long trip to find that the front door of his house is stuck. The cab driver who gave him a lift from the airport helps him get inside through a back entrance, but the two are seen by a neighbor of Dr. Gates', who apparently didn't recognize him and called the police. When the police arrived and asked Dr. Gates to step outside, he refused. The other participant in the Beer Summit, Sergeant James Crowely, entered the house, where Dr. Gates, after an apparently heated exchange, showed identification that proved he lived there. As Sgt. Crowley left, Dr. Gates followed him outside, loudly demanding his badge number and an apology. At this point, Sgt. Crowley arrested Dr. Gates for disorderly conduct, handcuffed him, and took him to the police station. The charges were soon dropped, but the finger-pointing and dissection of the event have only increased.

Those are the facts of what happened. It's the interpretation of the facts that have brought racial divisions in our newly “post-racial” country to the surface again. On the one hand you have those who point out, quite rightly, that Dr. Gates was in his own home, was under no obligation to come outside with Sergeant Crowley, and that asking for an officer's badge number – even in an insulting and loud manner – is not a crime. Those on this side of the argument will further point out that Professor Gates is a respected and well-known member of the community, is 58 years old, and walks with a cane. They will also make the point, quite rightly, that most African-American men of Dr. Gates' age have been, at least once in their lives and probably many times, treated unfairly, harassed, or goaded by police officers. They will also paint Sergeant Crowley as a racist thug.

On the other hand, we have those who say that Dr. Gates behaved in an arrogant and unreasonable manner, that he should have showed deference to Sgt. Crowley, and that he shouldn't have followed him outside shouting demands and (possibly) insults. These folks will point out that Sgt. Crowley teaches racial sensitivity and anti-profiling workshops for the Cambridge police force, and has an exemplary record. Those on this side of the argument will further point out that Sgt. Crowley puts his life on the line to serve his community, and that he deserved more respect than Dr. Gates seemed willing to give him.

Of course, both sides of the argument make good points. And until any of us are in the shoes of either of the principals in this fiasco, it's difficult to say how we might have acted differently. I think this story – one that is probably replayed many times daily, all over the country, only with less-visible personalities connected to it – has captured our attention because it says more about us than it says about Dr. Gates and Sergeant Crowley. If you can't figure out why in the world an educated man like Henry Gates would behave in such a manner toward a police officer, then ask yourself what you don't understand about being an African-American man in America. I know African-American parents who tell their children to avoid the police whenever possible, the same way my parents taught me to find a police officer if I was ever in trouble. I can tell you stories about friends of mine who have been harassed by police on their own property, in circumstances that wouldn't have attracted a second glance if my friends had been white.

And if you assume that Officer Crowley is a jackbooted racist, ask yourself what you don't understand about being a police officer and being confronted with such a situation. Ask yourself why you assume that his actions were racially motivated. Ask yourself how well you'd handle it if you were an officer doing your job, responding to a call from a concerned neighbor, and were met by open hostility and defiance.

“Who do you think you are?” I think that's the question that hung in the air that day between Dr. Gates and Sergeant Crowley, whether it was ever voiced or not. It's understandable, and it's human, and it's really about who we think we are. When that question gets asked, it's because the asker doesn't feel properly appreciated, valued, and respected. “Who do you think you are?' is the question voiced. “Why won't you understand who I am?” is the real concern. From that standpoint, maybe the Harvard professor and the police officer both blew it a little bit.

We have a mandate, as believers in Jesus, to trust in who God says we are. Jesus didn't respond to insults and suffering with retaliation and threats. He endured the suffering and trusted that God would sort it out. What would happen if we all took that example a little more seriously, if we could respond with kindness when someone is cruel, with respect when someone is disrespectful?

The fact is, though, that because of the human tendency toward self-preservation, those in power often have to make the first move in this direction. Those who, by virtue of race or education or wealth or influence or whatever, occupy a privileged position in our world will often have to be the first to respond to hostility with respect, anger with gentleness, harshness with kindness. That's why I'm convinced that those in the racial majority in this country, white people, have to make the first moves of reconciliation toward minorities. We risk less by doing so than those for whom prejudice, discrimination, and injustice are familiar occurrences.

I think maybe President Obama's impulse was the right one: if people can just sit down together and begin to get to know each other, it can go a long way toward reconciliation. It can help us to get the focus off of ourselves, remind us that the right question isn't “Who do you think you are?” It's “Who does God say we are?” And that question, rightly answered, will always put us in the same place together as God's creatures, recipients together of his love, and alike in need of his grace.