"It's Not the Dunking; It's the Decision"

...Don't you know that all of us who were baptized into Christ Jesus were baptized into his death? We were therefore buried with him through baptism into death in order that, just as Christ was raised from the dead through the glory of the Father, we too may live a new life. (Romans 6:3-4) 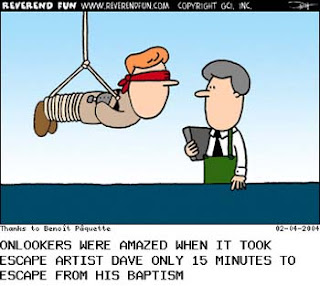 With a prayer, a few words, a quiet splash, and a wet hug, the most significant baptism I'll probably ever have a part in was completed last Sunday. I've lost track of the number of times I've said a few words and a prayer and put someone under the water, but only once has it been my son there in the baptistry with me. To be honest, the other baptisms all kind of blur together for me. It's not that they weren't significant or important to me, but you'll understand when I say that I won't remember the other ones like I'll remember this one.

I won't use much space writing about the experience of baptizing my son, partly because I don't have the words and mostly because the words I have would embarrass him. I've been thinking about baptism this week, though. In the Churches of Christ, the faith tradition in which I've spent my life so far, baptism of adult believers by immersion is very important. Sometimes, though, it's been important to us for the wrong reasons. This week, I've been surprised again by some things I thought I already knew. Maybe the same will be true for you.

I've been reminded of the “all of us” nature of baptism. Our church has genuinely shared in our joy. They've shaken Josh's hand, hugged him, told him how happy they are for him. They've been nearly as thankful and proud and pleased as we've been, and it's reminded me that baptism is a community event in which a person enters a family. As personal and individual as it may seem, baptism initiates us into a community that transcends time and space, that reaches back over the millennia and forward into eternity. As we embrace the Lord Jesus in baptism, we also embrace his people. I'm under no illusion that Josh has gotten to this point in his walk with the Lord due solely to my good example and teaching, or even my wife's. Our church, his community of faith, has had a lot to do with it as well. I pray that his community, who has helped him this far, will not fail him.

I've been thinking of how baptism relates to conversion. I believe, as nearly everyone in my faith tradition does, that baptism is for believers, not for infants. Some folks who are baptized among us bring quite a scandalous history to the baptistry, and I'm always inspired by hearing the stories of how they've left behind their old lives to follow Jesus. But I've been praying for years, in the words of a friend of mine, that my son wouldn't have to be “converted.” My prayer, answered in part last Sunday, has been that Josh's walk with the Lord – whatever twists and turns may surely be a part of it – would start early in his life. If he wanders away a bit, I'll trust in Jesus' promise that nothing and no one can take his sheep out of his hand. And when the Lord brings him back, it will be back to a life and a community that he has known from his early years.

We've generally connected baptism with forgiveness of sin, and that's because the Bible seems to make that connection (c.f. Acts 2:38). But that's not the only connection the Bible makes, and this week I've been thinking more about baptism as death and life. “We were therefore buried with [Christ Jesus] through baptism into death,” Paul wrote in Romans. What kind of father hands his son over to death? That's what I did last Sunday, though, because I believe that God handed his Son over to death for Josh. Baptism is a re-enactment – more than that, an appropriation – of Jesus' death and resurrection. In being baptized into Christ, we join him in testifying that we trust in God to sustain us and ultimately give us life.

More than that, in baptism we announce our intentions to begin living this new life now, before the Lord returns and God's kingdom breaks into the world visibly and powerfully. Our baptism isn't just a moment to which we point as evidence that God has forgiven our sins. It also reminds us of who we are and the life we've entered. It exposes hypocrisy when our walk doesn't match our talk. It strengthens us when we know the right thing to do but are having trouble finding the courage to do it. It reminds us of God's promises when we're feeling discouraged and broken-hearted. It gives us hope for the future when the present looks hopeless. We look back to our baptism when we need to remember who we are, what we believe is most important, and what God promises us.

As usual, Josh summed up his baptism better than I ever could. “It's not the dunking, it's the decision,” he said. Not even dry, and he's already a better preacher than I am.

He's right, of course. In the end, your baptism is about the decision you made to follow Jesus. It's about the death you choose to die and the life you choose to live, your confession that Jesus is Lord and the reality of letting him be. I pray that you look back with joy on that moment in your own life, and that it brings clarity and strength to your life today.

Unless otherwise indicated, all Scripture quotations are taken from The Holy Bible, Today’s New International Version TNIV (r), Copyright (c) 2005 by International Bible Society. All rights reserved.
Posted by Patrick Odum at 9:35 AM