Will the LORD be pleased with thousands of rams,
with ten thousand rivers of oil?
Shall I offer my firstborn for my transgression,
the fruit of my body for the sin of my soul?
He has shown all you people what is good.
And what does the LORD require of you?
To act justly and to love mercy
and to walk humbly with your God. (Micah 6:7-8) 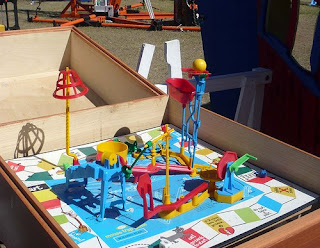 As March Madness begins this week, maybe we need to take the time to appreciate a true dynasty in college competition.

It's not a basketball program. It's not even an athletic team. It's the Purdue Society of Professional Engineers, a group of engineering students from Purdue University in West Lafayette, Indiana. They won the regional finals of the Rube Goldberg Machine Contest last month, and are favorites to win the national championship later this month. They've won the contest seven out of the last nine years, including an astounding six straight from 2003-2008.

The contest is named after the cartoonist Rube Goldberg, who drew absurdly complicated machines for performing extremely simple tasks. The contest has in previous years asked entrants to create complicated machines for tasks like sharpening a pencil or making a cup of coffee. This year's contest asked students to design and build working machines to dispense an appropriate amount of hand sanitizer into someone's hand.

A few years ago, the students at Purdue designed a machine that changed the batteries and turned on a flashlight in 125 steps. Think about that. How many steps does it usually take you to change batteries in a flashlight? I just counted five. Six, if you want to turn it on afterward. Six steps: it would take some work, wouldn't it, to stretch that to 125? Purdue's contraption included simulations of a rocket launch and a meteor impact on earth.

Some days I wonder if Rube Goldberg isn't the most influential theologian in the church today. I wonder because it seems to me that many of us, myself included sometimes, hopelessly complicate our relationships with God. I'm thinking of folks I know, good people, whose status with God seems to rely on the correct parsing and synthesis of difficult biblical passages. Of people whose blueprint for being in relationship with God includes the maintaining of empty traditions or the keeping of countless rules. Some of the people on my mind at the moment see no alternative than to allow others to define and maintain their faith for them. Maybe this Goldbergian theology involves particular worship methodology or style. Sometimes it involves preoccupation with the human response to the gospel, to the extent that the gospel itself becomes secondary. Whatever the particular complexities of these various means of approach to God, the end result is the same.

If you've ever played the game Mouse Trap, you know what the end result it. In Mouse Trap, players build an incredibly complicated trap that includes a boot on a stick kicking a ball that falls through a bathtub and onto a springboard, which flips a man into a tub and which eventually causes a cage to fall on a mouse. At least in theory.

But it never works.

You carefully build the trap. You follow the directions to the best of your ability, feel certain that you have all the parts in the correct places. And then it comes time to spring the trap and something always seems to go wrong. The man misses the tub. The boot doesn't hit the ball it's supposed to kick. The cage doesn't fall. One of the myriad parts is just slightly out of alignment, and it messes up the whole works. It's frustrating, discouraging, and it makes you not want to play the game again.

That's true with Mouse Trap Theology, too. When your relationship with God depends on getting all the parts in a complicated machine in line, everything will rarely be in line. And you'll be frustrated, and discouraged. And you might just decide it's not worth doing if it's not going to work like it's supposed to.

Maybe that's why from time to time God has raised up people who have a knack for simplifying theology, for boiling down the relationship between human beings and God to its essence. “What does the LORD require of you?” Micah asked. “More and more sacrifice of escalating value? Shall I offer my own children to God?” Micah shakes his head and ticks it off on his fingers: “treat the people around you with justice and mercy, live humbly with God.”

Micah's not adding a couple of new mechanisms to an already-complicated machine. He's dismantling the machine. Relationship with God is not cultic, or ritualistic, or rule-oriented, or a matter of interpretation. It's relational, and it lives and thrives when we treat others right and live in submission to God.

Jesus brought the same breath of fresh air to the smoggy, stifling religious atmosphere of his day. He waved away all the haze of traditions and laws and exegetical hoops. He dismantled the Goldbergian theological machines the religious people of his time had constructed. “Love the Lord your God with all your heart and with all your soul and with all your mind,” he said. “This is the first and greatest commandment. And the second is like it: Love your neighbor as yourself.”

Those words are the sound of freedom. God has reached out to us. He has built a bridge of grace and forgiveness that we walk through faith in Jesus. He wants a relationship with us. He loves us first, and all he asks of us is that we love him in return. Every command he ever gave, every moral and ethical obligation, every ritual demanded, every work of service ever required, hangs on the fact that God is looking for love from us.

There is not credit for complexity awarded here. There is only God, loving you and asking you to love him. Only Christ on the cross, purchasing your freedom and forgiveness. Only an empty tomb, promising hope. Only the Holy Spirit, living inside you. In the end, you can't build anything that will give you any of that. All you can do is live a life of love for the One who did it for you.